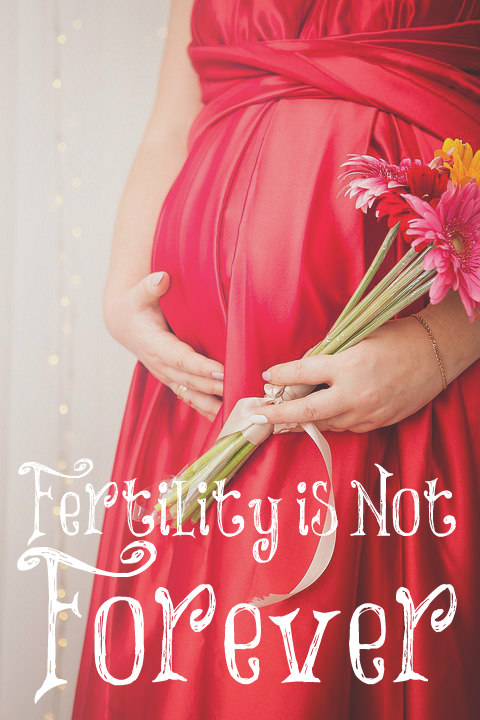 Many people look at my large family of almost ten and their minds are screaming…”NO THANK YOU.” I get it. I recently encountered a pregnancy announcement for baby number 16. My mind screamed..”IS THIS EVEN POSSIBLE?” It looks scary. It looks impossible. It doesn’t look like much fun.

The reality is that God only gives one (maybe three) babies at a time (naturally that is). There is a ten month preparation time. And our fertility isn’t forever. God opens and closes our wombs. Menopause does happen. And when it does, we miss what we don’t have (I’m sure Sarah went through this phase, yet God still opened her womb at an old age).

The more grandparents I run into, the more I hear this phrase. “If only we knew what we know now, we wouldn’t have ever stopped having children.” One day they will all be gone. One day we will be passed our fertile years. Fertility doesn’t last forever. Just because you trust God with your family size doesn’t mean you will be exploding at the seams. Although I will say that it is a lot more fun than it looks. It is very rewarding and a lot easier than you can imagine. No, it isn’t easy. No matter how many children you have, it isn’t easy. It will always require sacrifice and heartache. But the rewards of raising God loving and God-serving disciples for Christ is limitless. It is simply eternal.

We can simply live for the culture. By their rules. By their limitations. By their standards. Or we can live by God’s. We can live for God. In His best. In His timing. And in His supernaturally possible.

What an honor it is to use our bodies as a vessel to bring forth life God creates. To know that the baby inside of us is fearfully and wonderfully made. That this baby has a plan and a purpose. An eternal plan. A greater plan than we can ever give them. That this isn’t our children, but rather God’s and we get to be a part of God’s greater plan. We get to be the vessel He uses.

As women, our bodies were made for this. He chose us to procreate. He created us to bring forth life. He created us fertile with hearts of mothers. Let’s start celebrating the short-lived years of fertility and trusting God to give as He pleases. Because no matter what, every single addition is of great blessing.

Proverbs 3:5,6
“Trust in the Lord with all your heart, and do not lean on your own understanding. In all your ways acknowledge him, and he will make straight your paths.”

Psalm 9:10
“And those who know your name put their trust in you, for you, O Lord, have not forsaken those who seek you.”

Jeremiah 17:7,8
“But blessed is the one who trusts in the Lord, whose confidence is in Him. They will be like a tree planted by the water that sends out its roots by the stream. It does not fear when heat comes; its leaves are always green. It has no worries in a year of drought and never fails to bear fruit.”