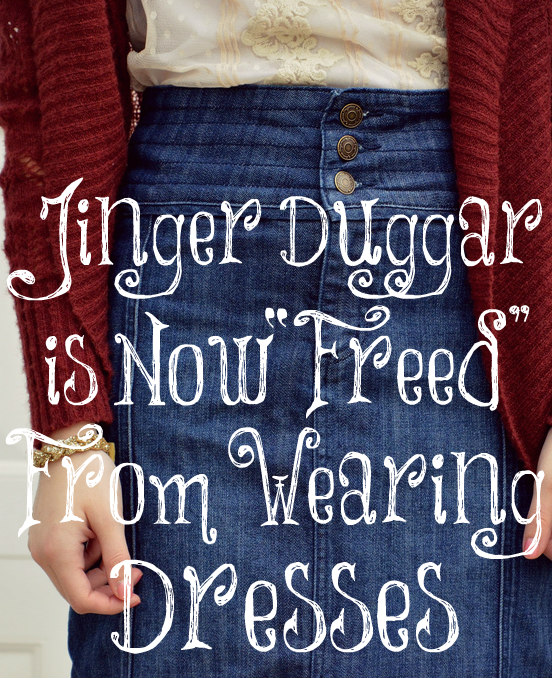 We were discussing in the chat room the fact that Jinger Duggar is now wearing pants since she got married and some women outside of the chat room are clearly excited about it. This sentiment bothered me since it made it seem as if she was in “bondage” in her parent’s home but now she’s “free.” I have heard those who hate Christianity state the same sentiment and as believers in Christ, we should support other believers in their convictions.

If Jim Bob and Michelle have the convictions that females should only wear skirts and dresses just below the knee, we should applaud them for having convictions and sticking to them instead of rejoicing when one of their daughters walks away from that conviction when she marries. In saying this, I have no problem with Jinger wearing pants now since it must be okay with her husband who is her head now and not her father. It’s no big deal but not something to celebrate since she wasn’t in bondage in her parent’s home!

Christianity is never bondage but freedom in Christ. We have freedom to decide what is modest and what isn’t modest by asking our dads when we live under their roof and our husbands once married and then dressing accordingly. Men know what causes men to stumble and what does not.

In the discussion in the chat room, some women felt that women should only wear skirts and dresses and they should be“long and flowing” since this is what modest “apparel” means in the Greek, so I decided to see what the commentaries of old had to say about it. (If you have a question about anything in the Bible, I encourage you to go to the commentaries of old and learn from these men and their interpretations of the Word. Many of them are convicting and challenging and this study sure was for me!).

Many women today love clothing and fashion, especially in America. Our closets are packed full and it’s easy to be looking for new clothes to spend money on even though we have plenty. Dressing fashionable has never been a big deal to me. I just mostly want to be comfortable and look nice, not fashionable or own a bunch of expensive clothing but these commentaries still very much convicted and challenged me.

In like manner also, that women adorn themselves in modest apparel, with modesty and sobriety.
1 Timothy 2:9

Ellicott’s Commentary about this phrase: “Adorn themselves in modest apparel.”—This direction to Christian women was not intended to apply to their ordinary dress in the world, but simply explained to the sisters of the Ephesian flock that their place in public worship was one of quiet attention—that their reverence and adoration must be shown not by thrusting themselves forward with a view to public teaching or public praying, but by being present and taking part silently—avoiding especially in these services anything like a conspicuous dress or showy ornaments—anything, in fact, which would be likely to arouse attention, or distract the thoughts of others.”

Part of being modest is not wanting to speak in the church which I have written a lot about. Since the Apostle made a big deal about women being silent so should we. Also, our clothing should not be showy and trying to get others to notice us, especially members of the opposite sex; for we are called to be shamefaced, not wanting to draw others’ attention.

Benson Commentary: “The word καταστολη, rendered apparel, according to Theophylact and Œcumenius, was a long upper garment which covered the body every way. What the apostle especially forbids is that immodest manner of dressing which is calculated to excite impure desires in the spectators, or a vain admiration of the beauty of those that use it: also that gaudiness or showiness of dress which proceeds from vanity, and nourishes vanity, wastes time and money, and so prevents many good works.”

Our clothing should cover the body, which is pretty much a given. We also need to be careful to not waste time shopping for clothes or spending a lot of money on it, but instead, we need to care a lot more about serving and helping others. We are called to be known for our good works, NOT for how we dress.

Matthew Henry’s Commentary: “Women who profess the Christian religion, must be modest in apparel, not affecting gaudiness, gaiety, or costliness. Good works are the best ornament; these are, in the sight of God, of great price. Modesty and neatness are more to be consulted in garments than elegance and fashion. And it would be well if the professors of serious godliness were wholly free from vanity in dress. They should spend more time and money in relieving the sick and distressed, than in decorating themselves and their children.”

This is the sentence that is very convicting: “It would be well if the professors of serious godliness were wholly free from vanity in dress.” Vanity means emptiness; want of substance to satisfy desire; fruitless desire or endeavor. Are you serious about godliness? Do you want to please the Lord in everything? If so, then you should want to be free from vanity in dress.

This statement reminded me of Debi Pearl. I have seen her in some YouTubes and she always dresses fairly plain and modest. I spent a week with them years ago and she dressed the same way. She doesn’t wear makeup and wears her hair long but every time I saw her, she was smiling and joyful. One can easily see that she cares more about inner beauty than outward beauty.

This is very appealing to me, especially as I grow older and don’t care as much about how I look since my looks are definitely fading but it seems it should be important to all women who are serious about godliness. We need to care more about helping the hurting and suffering than spending time and money on vain pursuits and decorating ourselves.

Favour is deceitful, and beauty is vain: but a woman that feareth the LORD, she shall be praised.
Proverbs 31:20

Barnes’ Notes on the Bible: “The apostle does not positively specify what this would be, but he mentions somethings which are to be excluded from it, and which, in his view, are inconsistent with the true adorning of Christian females – ‘broidered hair, gold, pearls, costly array.’ The sense here is, that the apparel of females should be such as becomes them, or is appropriate to them. The word here used (κόσμιος kosmios), shows that there should be due attention that it may be truly neat, fit, decorous. There is no religion in a negligent mode of apparel, or in inattention to personal appearance – anymore than there is in wearing gold and pearls; and a female may as truly violate the precepts of her religion by neglecting her personal appearance as by excessive attention to it.

The true idea here is, that her attention to her appearance should be such that she will be offensive to no class of persons; such as to show that her mind is supremely fixed on higher and more important things, and such as to interfere with no duty which she owes, and no good which she can do, either by spending her time needlessly in personal adorning, or by lavishing that money for dress which might do good to others, or by neglecting the proprieties of her station, and making herself offensive to others.”

This is the bottom line: Paul doesn’t positively say what modest apparel is and we need to be careful about becoming legalistic about this by trying to find how priests in the Old Testament were supposed to dress or how the Greek may have interpreted the word “apparel” since opinions and commentaries vary on this. We need to make sure we are clean, neat, and modest but not waste time, energy, or money on our looks, nor waste time when a female Duggar wears pants.

This is not easy in our fashion and youth-driven culture but we are not of this world. This isn’t our home, and as we dress modestly without spending a lot of money, we need to be paying a lot more attention to our inner man. Our concern should be to be salt and light to a decaying culture, not keeping up with its fashions and vanity. Let’s learn to spend the money, energy, and time on others instead. If you are a mother of young children, this means your time will mostly be spent in your home with them but as they get older, you will have time to minister to those in your community.

9 thoughts on “Jinger Duggar is Now “Freed” From Wearing Dresses”