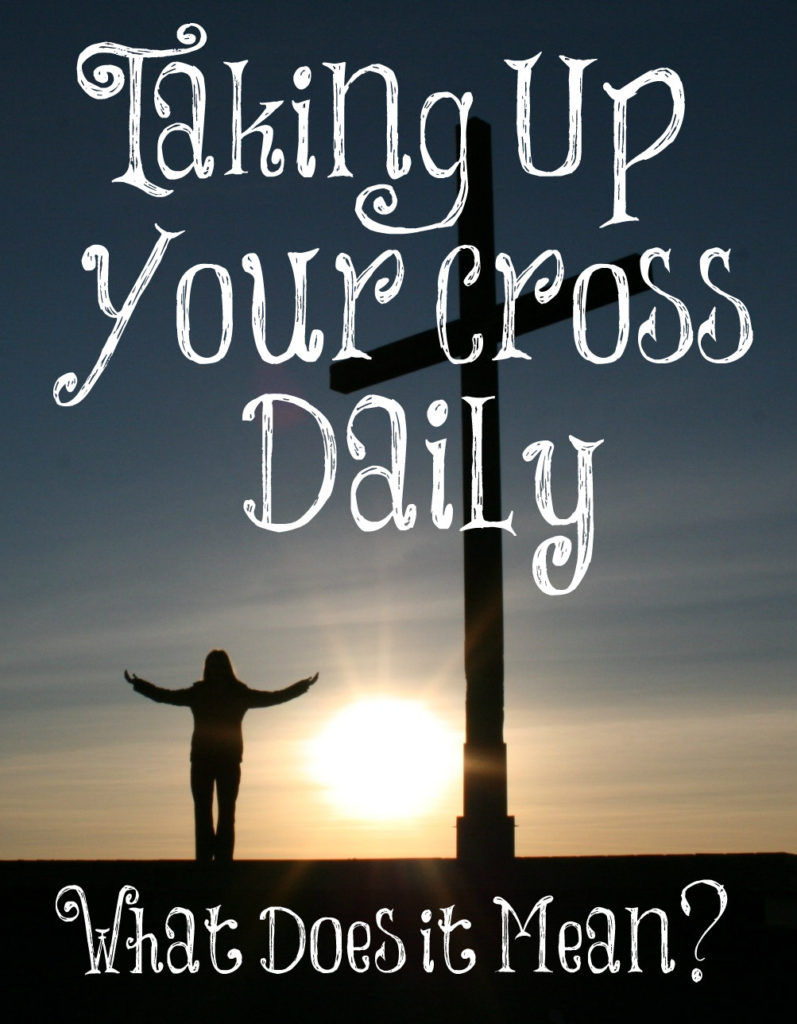 Many Christians teach that we should “die daily” and “take up our cross daily.” What does this mean? (This was a question asked of Michael Pearl and he answered on a video.)

Okay, let’s look at that. That’s a commonly misunderstood concept. Always consider the context. He says, “If any man come after me, let him deny himself, take up his cross daily, and follow me” (Luke 9:23).

Jesus is preparing his disciples for his crucifixion. He’s been telling them about how he’s going to die. He asked them, “Whom do people say that I am?”

He’s inquiring to get a feel for what the population was thinking about him. They gave various answers, and he said, verse 20, “‘But whom say ye that I am?’ Peter answering said, ‘The Christ of God.’ And he straightly charged them and commanded them to tell no man that thing saying…”

This is Verse 22, the verse before the one in question. “The son of man must suffer many things and be rejected by the elders and the chief priests and the scribes and be slain and be raised the third day.” So, in the context of how he was playing with the public, he warned them that He Himself was headed to the cross, to rejection, and to death.

Well, within a few hours, Peter was denying Jesus Christ. So Peter didn’t follow Jesus to the cross. The Bible said he and the disciples “stood a great way off.” He is challenging them to follow him in His sufferings and in His death. In other words, instead of being three crosses on the hill, four with Peter, five with John, six with Andrew, and so forth.

“So if any man will come after me, let him deny himself, take up his cross daily and follow me.” Now, when he said, “take up his cross,” we know what that is. As we look later on, Jesus is bearing the cross, he falls down, and they compel Simon, one of Cyrene, to bear the cross after him.

So Jesus is carrying one end of it, Simon is carrying the other end of it, and they’re carrying the cross. Any time that the city of Jerusalem saw a man carrying a cross through the city, outside to Golgotha where he would be crucified, they knew what he was doing. He was a dead man walking. He was heading to his death.

Jesus said, “If you’ll come after me, take up your cross daily.” In other words, you must be prepared at any moment to die, because it could happen at any time. So every single day as you follow me, be prepared to do what I do, which is die for this teaching that I have.

Then he goes on to say, “For who so ever will save his life shall lose it; but whosoever will lose his life, for my sake, shall save it.” And so He’s saying if you depart from me, you deny me, you lose your life, but if you go ahead and follow me all the way you save it.

If we were to draw an application of that passage beyond the original context, what would it be? Well it’s obvious. There was recently a man, a Christian in Iran, who had the death sentence upon him. He was a pastor. He was preaching the gospel, and it’s illegal there to be a Christian. So they told him if he would recant, if he would deny Jesus Christ, and come back into the Muslim fold, then he would not be executed.

I was praying on this end, that he would take up his cross and follow Jesus, deny himself, for God’s sake, and for the gospel’s sake, and in so doing save his life. Otherwise, if he denied Christ he’d lose his life. So it’s this contrast, if you think, if I deny Christ I’ll save my life, I won’t die. He said, no, if you go ahead and confess me you may die, but you’ll save your life. He’s kind of got a turn on words and concepts there.

Now there’s quite a few other passages, maybe a dozen, maybe not that many, six of them, eight of them, in the New Testament where people have developed this doctrine of this daily dying to self, this self-introspection, this morbid putting away of self‑motivation, self‑aggrandizement, self‑pleasure, and sublimating your humanity to some sort of a morbid austere spiritualism.

I’ve known so many people like that. They’re all nauseous. It really came out of the Keswick movement in England. It’s the concept that we must, or God must, God or us or both, must do this work inside of us. Books like the Calvary Road, Roy Hession, Norman Grubb, Iron Thomas, Andrew Murray, wrote a lot about this concept of daily experiencing this inner crucifixion of self.

That’s not a biblical doctrine. It’s totally contrary to the Bible. It’s anti‑Christian, it’s anti‑Bible. It’s really a doctrine you’d find in Buddhism. Some of our missionaries come back and they say, “That’s the very doctrine.” In fact, the doctrine originated a whole lot out of Eastern teaching, and it is an Eastern mysticism rather than a Christian doctrine. It’s amazing how it perpetuated in spite of the clear teaching of Scripture, but that’s the meaning of the passage.

8 thoughts on “Taking Up Your Cross Daily – What Does it Mean?”