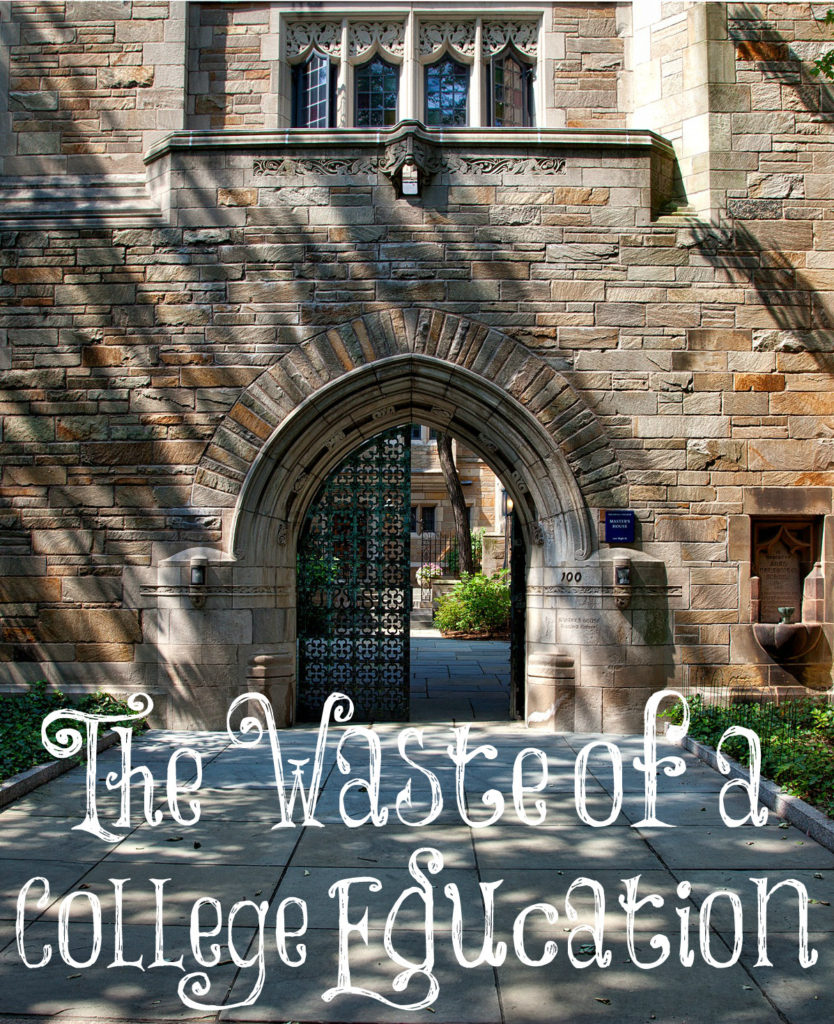 Our culture idolizes education. Having a degree from a university makes you somebody in most people’s mind. I know it doesn’t matter to the Lord, that is for sure since the “the wisdom of this world is foolishness with God” (1 Corinthians 3:19). “A recent article in The New York Times about the mountain of education debt owed by college graduates — an average of $27,600 — reports that “fewer students than ever say taking out loans to attend college was worth it.”Dave wrote this about universities in the comment section on my blog.

“I’ve often said that college was a joke, overall, and simply a meal ticket that was a waste of time and money, having said that my business degree from a major university was a 95% waste of time. And that was 40 years ago. After a career in commercial banking I have not changed my mind.

Now I see college not as simply a substantial waste* but as a death mill with: 1) ridiculous costs; the burden on families and government, 2) as an anti-biblical bastion pushing a PC cram-down without freedom of thought, 3) teaching young adults to waste time and become a burden, disengaging them from the real work-a-day world, 4) it delays marriage and the seriousness of family, 5) it is an incubator of immoral sexual behavior, 6) it trains all to get used to women leaving the care for the household. Phrased another [and frank] way: it trains up lazy, self-serving, sexually immoral, thoughtless, non-contributory, a-biblical leaches on life that have just left everyone [parents, students, government] in big debt.

While colleges started with proper motives, it all started to unravel when it originated women’s colleges in the mid 1800s, taking women from the home, selling all that they should be ‘in the gates of the city’ conducting business alongside men. It helped make a mockery of marriage.

There are a handful of disciplines where college is helpful/ necessary [maybe for 20% who attend college] but ’on the job’ education is the way, and much less costly.”

I posted this on Facebook the other day and as you can imagine, I received many angry comments. 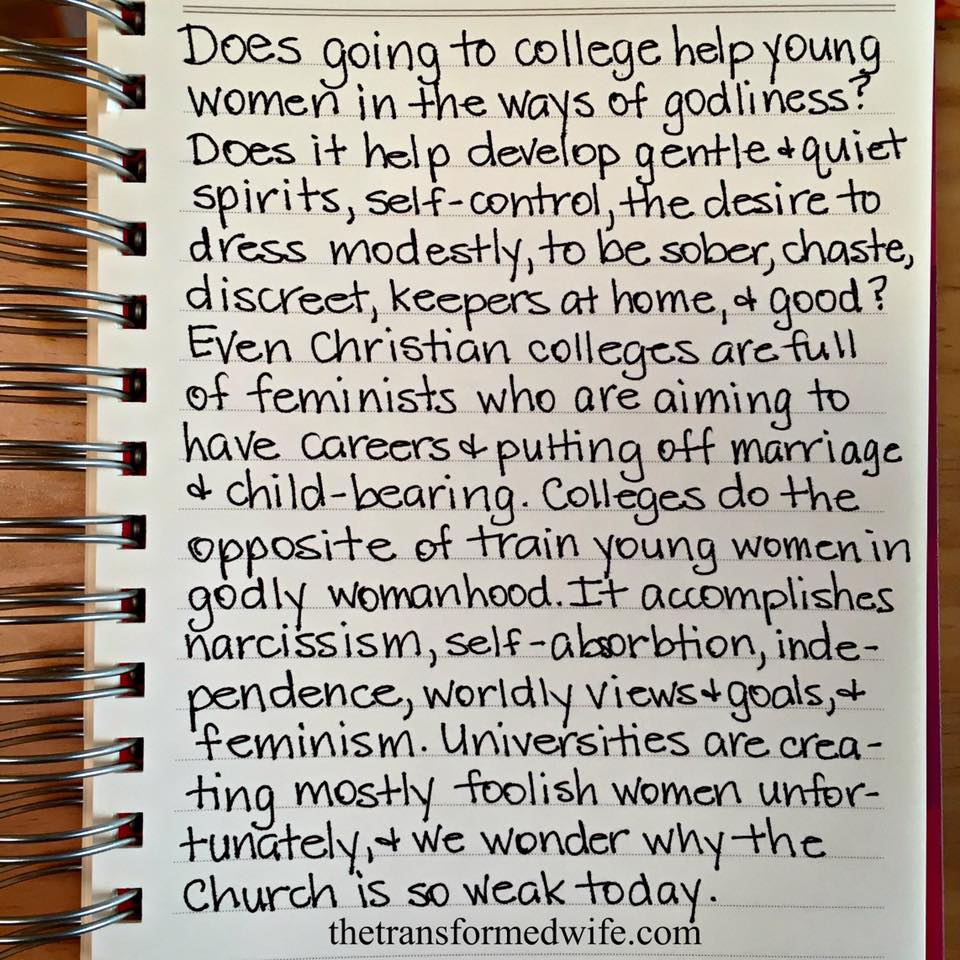 Dennis Prager, my favorite radio personality, agrees with Dave. He believe universities along with the Hollywood and the media are what have caused our nation to become so evil. He thinks only those who want to become doctors or something along this line should go to college since they actually need an education and can pay back the debt. Dennis wrote, “Suffice it to say, therefore, that vast numbers of college students outside of the sciences learn too little, rarely have their minds opened and rarely learn to love learning. If you major in English, for example, you are far less likely to immerse yourself in studying Shakespeare than in deconstructing him and others dismissed as Dead White European Males. Our colleges are dominated by ‘post-moderns’ and other nihilists for whom seeking truth is regarded as a reactionary fraud, not an academic ideal. For these professors, deans and presidents, the primary purpose of the university is to mold students in their images — people alienated from America and from God.”

It was mostly educated university students who voted for Bernie Sanders. Mr. Sanders wants to tax people up to 90% of their income, thus taking away all incentive to work. Yes, I do agree that for some men a college university is important, especially for men who need to support their families and are going into the medical field but I will never believe that a university education is important for the masses since it accomplishes exactly the opposite of goodness or godliness.

“I am as sure as I am of Christ’s reign that a comprehensive and centralized system of national education, separated from religion, as is now commonly proposed, will prove the most appalling enginery for the propagation of anti-Christian and atheistic unbelief, and of anti-social nihilistic ethics, individual, social and political, which this sin-rent world has ever seen.”  – A.A. Hodge (Yes, I understand this quote concerns sending children to public schools but universities are giving the same results.)

25 thoughts on “The Waste of a College Education”