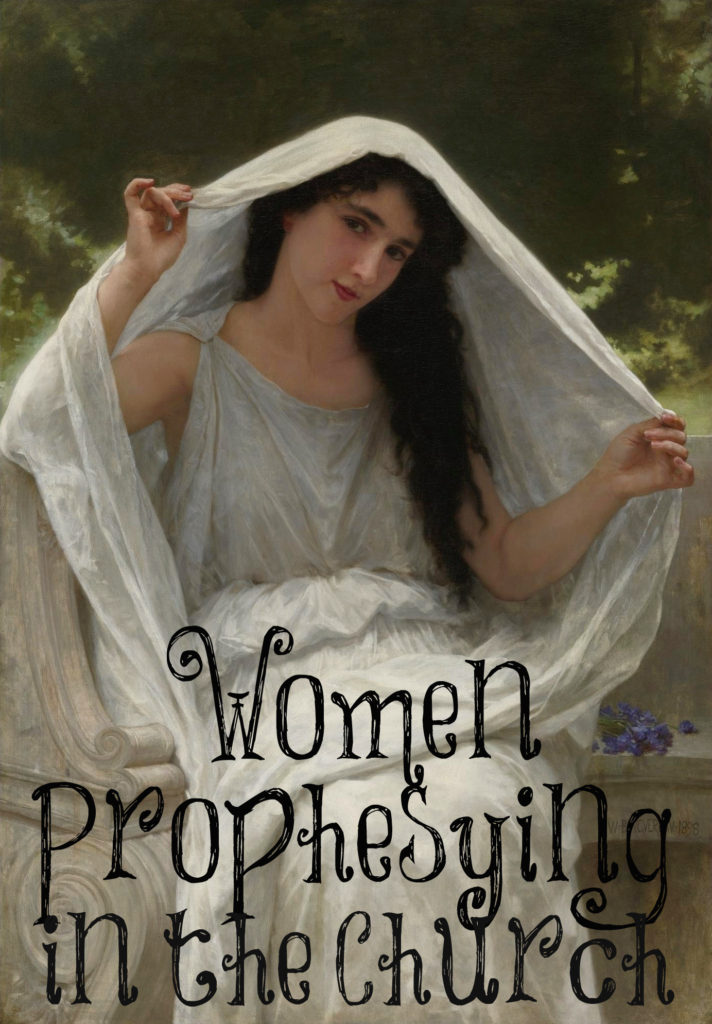 Whenever I teach that women are commanded to not be preachers/teachers of the Word but to be silent in the churches as the Apostle Paul has taught, invariably I have women tell me that women can prophesy in the church because of 1 Corinthians 11:5. “But every woman that prays or prophesies with her head uncovered dishonors her head: for that is even all one as if she were shaven.”

Years ago, I listened to Michael Pearl teach 1 Corinthians and he taught that the Apostle Paul wrote this letter to the Corinthian church because they were the most “messed up church in the New Testament” and it is “an extremely practical book.” Paul doesn’t only deal with behavior in the church service but mostly with the daily behavior of all Christians.

Let’s look at the context of this verse to see if people are right about women prophesying in the church. The entire chapter before this verse are instructions for godly behavior and doesn’t mention anything about being in a church service. Here are a few verses for examples.

Neither let us commit fornication, as some of them committed, and fell in one day three and twenty thousand.

9 Neither let us tempt Christ, as some of them also tempted, and were destroyed of serpents.

10 Neither murmur ye, as some of them also murmured, and were destroyed of the destroyer.

31 Whether therefore ye eat, or drink, or whatsoever ye do, do all to the glory of God.

The next chapter, 1 Corinthians 11, then goes on to speak about a husband being head over his wife and the verse we are studying is in these verses.

4 Every man praying or prophesying, having his head covered, dishonors his head.

5 But every woman that prays or prophesies with her head uncovered dishonors her head: for that is even all one as if she were shaven.

6 For if the woman be not covered, let her also be shorn: but if it be a shame for a woman to be shorn or shaven, let her be covered.

7 For a man indeed ought not to cover his head, forasmuch as he is the image and glory of God: but the woman is the glory of the man.

8 For the man is not of the woman: but the woman of the man.

9 Neither was the man created for the woman; but the woman for the man.

15 But if a woman have long hair, it is a glory to her: for her hair is given her for a covering.

16 But if any man seem to be contentious, we have no such custom, neither the churches of God.

Do you see that last verse? The churches of God have no such custom! There’s nothing here about being part of a church service in these verses. It’s simply teaching a wife’s relationship to her husband as he is her head and authority, and he is her head whether or not she is in a church service or not. Her hair is always her covering as a symbol of being in submission to her husband.

The next thing I want you to ponder is the definition of prophesy given in the Bible. A couple chapters later, Paul describes it for us: “But he that prophesies speaks unto men to edification, and exhortation, and comfort” (1 Corinthians 14:3) It’s not a “new word from the Lord” as many claim today. It’s using what we know from the Word to edify, exhort, and comfort others. Mothers will use all of these when raising their children.

Older women also use all three of these things (prophesy: edify, exhort, comfort) with younger women as I do in order to teach all aspects of godly womanhood. Ken has told me that I have the gift of prophesy but I certainly don’t ever speak out in a church service or hear a “new word” apart from Scriptures. Women may even have to exhort a friend, sister, or relative who is in sin. It has nothing whatsoever about speaking out in a church service and Paul made this clear when he taught that women are to be silent  in the church (1 Corinthians 14:34 and 1 Timothy 2:12).

10 thoughts on “Women Prophesying in the Church”