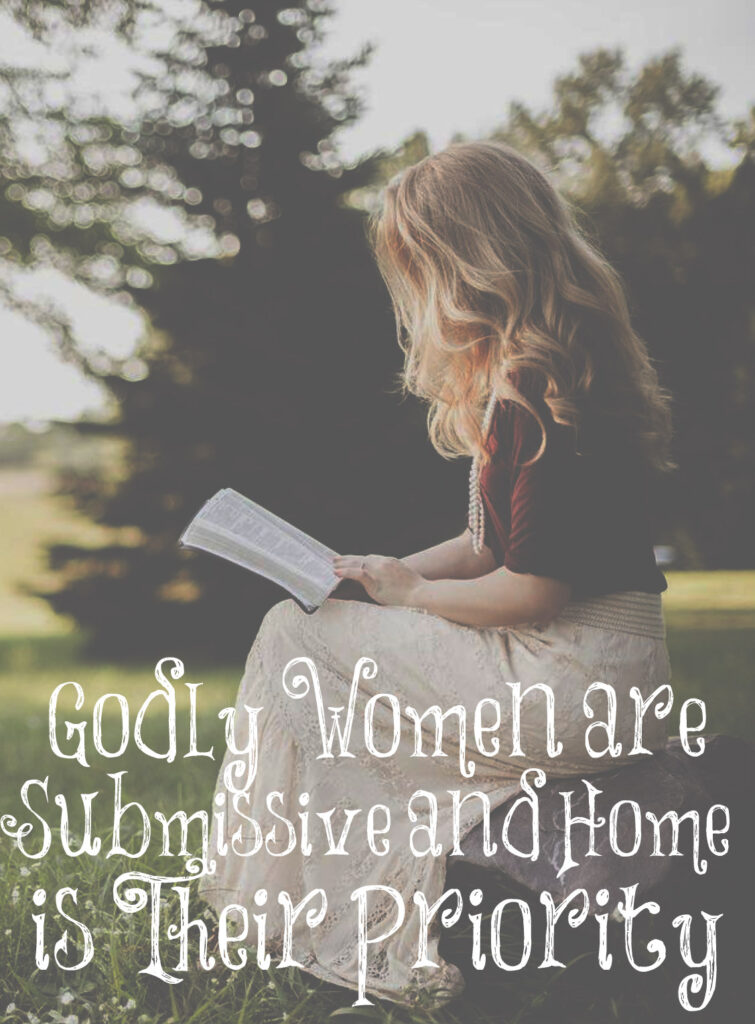 The other night, I listened to the greatest sermon on biblical womanhood that I have ever listened to by Pastor Voddie Baucham. He gave it nine years ago, and it is so powerful! He first exhorted young men to only marry a woman who is submissive. “She must be submissive. Period.”

In Ephesians 5:21 and on, we are told to submit to proper biblical authority: wives to husbands, children to parents, and servants to masters. Two heads create a monster. Remember, submission is for order, not value,

It’s all about biblical headship. Marriage is modeling Christ and His Church. We must be submissive to the biblical picture in marriage.

Then he comes to the discussion of women being keepers at home. He tells women that there is no way they can have it all. Home must be their priority. He warns men NOT to marry a woman whose home isn’t her priority. Too many women make their careers their priority and would rather serve a boss rather than a husband.

Voddie was raised by a single mother. She had to work in order to care for him. He was a latchkey kid. The neighbors would check in on him. He doesn’t resent his mother. He knows she had no choice. But he knows many who resent their mothers. Their mothers were working because they wanted more stuff. Stuff was more important to them than her children. They chose to sacrifice their children on the idol of prosperity.

His mother did what she had to do, but many bought the feminist lie. They abandoned their children because they sought after something they thought was more fulfilling, more important, and more rewarding. There is NOTHING more praiseworthy than a woman who dedicates her life to her husband, children, and home.

His wife graduated from college Cum Laude but laid it down for him and his children. People ask her if she regrets not using her education. She responds, “I am raising and training three warriors for the cause of Christ. I have another one on the way. There’s nothing in this world that is more important than that, more rewarding than that, and more valuable than that, and when I put my head on my pillow at night, I have no regrets about the contributions I am making to my home. More importantly than that, when they leave, I won’t have to wonder if they will despise me because I sacrificed them in order to pursue something else.” (This was nine years ago, so they have more children now!)

There are two mandates God has given married couples: be fruitful and multiply (have a lot of them!) and raise them in the nurture and the admonition of the Lord so we can loose them on the world for the cause of Christ and that our marriage would be a living, breathing example of Christ and His Church.

She looketh well to the ways of her household, and eateth not the bread of idleness. Her children arise up, and call her blessed; her husband also, and he praiseth her.  Many daughters have done virtuously, but thou excellest them all.
Proverbs 31:27-29