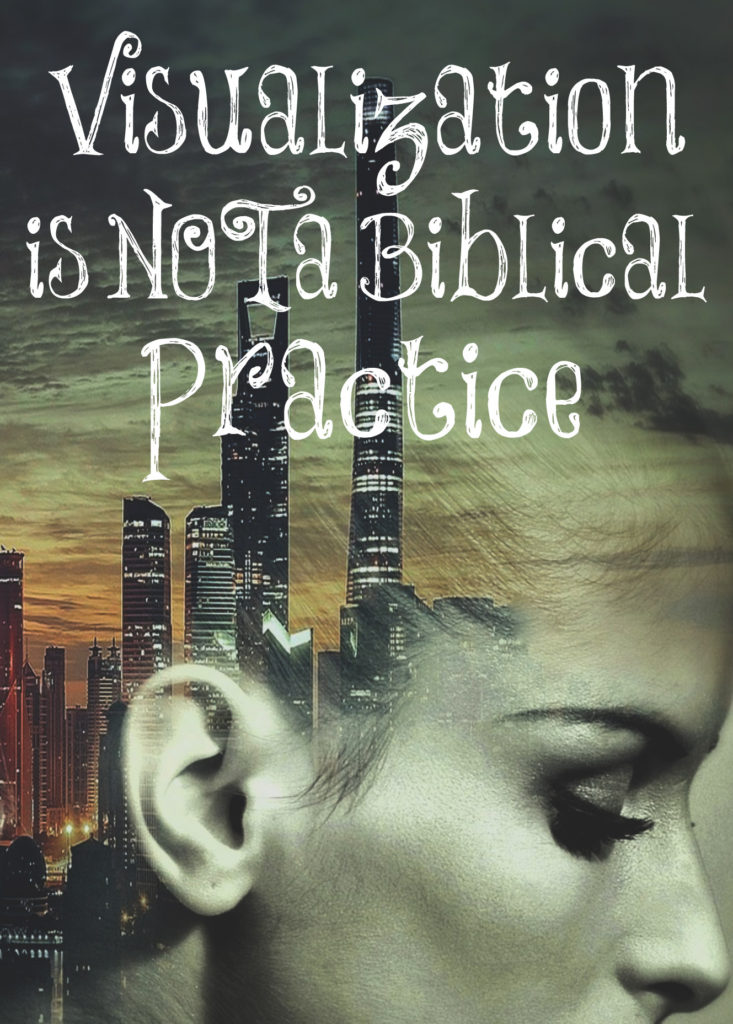 “The fact that something produces seemingly good results is not reason for Christians to accept or practice it. Overweight Christians attempt to take off unwanted pounds by visualizing themselves as that slim person they hope to become. Our eyes are turned from Christ to ourselves. Instead of being transformed into His image by the Spirit of God, we now seek to transform ourselves by the power of visualization into the new self-image we have fantasized.

“Visualization and other occult techniques for activating powerful forces have been practices secretly and consistently for thousands of years. Today they are out in the open as part of the New Age movement and are widely accepted even by sincere Christians who are not aware of the origins or dangers involved in the practices they are adopting.” (Beyond Seduction: A Return to Biblical Christianity by Dave Hunt)

There are many false teachers, women. There are many false teachings. Our lives need to be built upon the solid Rock of Jesus Christ and His unchanging Word. We must not believe we can simply visualize something and expect it to happen. Instead of visualizing something which is never promoted in God’s Word, learn to take every thought captive to the obedience of Christ. Renew your minds daily with God’s Word. In this way, you will spot false teaching immediately.

We can do NOTHING without Him. There’s nothing good within ourselves without Him. We don’t have the power to visualize anything into existence. We don’t have to power to speak anything into existence. Only God Himself has the power to do this. We can go to the Lord in prayer about anything and trust that He hears us. But we understand that we want His will to be done, not ours since He is all-powerful and all-knowing.

The health and wealth gospel is a false gospel. We aren’t promised health nor wealth in this life too. We are promised that God will never leave nor forsake us, that ALL things work together for good to those who love Him and are called according to His purpose, and that we will spend eternity with Him. We are also promised tribulation, suffering, and persecution in this world. Modern-day Christians don’t like to hear this, but it’s Truth.

We are promised we can do all things through Christ who strengthens us. This means that whatever God has called us to do, we can do with His Spirit working mightily within us. Whatever trials and suffering we go through, He will comfort and strengthen us.

When it comes to something like gluttony or some other sin we may struggle with, we can have the victory because of Christ’s work on the cross but it will involve self-discipline and sacrifice. It may even involve accountability, but God has given us the family of God for this purpose.

Beloved, believe not every spirit, but try the spirits whether they are of God: because many false prophets are gone out into the world.
1 John 4:9