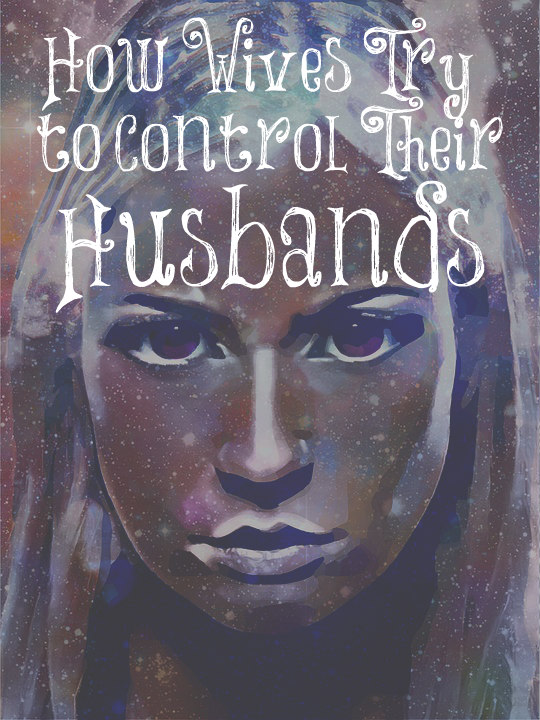 In Genesis 3:16, we are told the consequences of sin that women would experience due to sin entering the world. One thing that would happen to them is that “…thy desire shall be to thy husband, and he shall rule over thee.” There is great disagreement what this actually means. Even the commentaries of old disagree about the interpretation. I believe it means that the woman’s desire will be to control her husband just as in Genesis 4:7, we are told “sin lieth at the door. And unto thee shall be his desire, and thou shalt rule over him.” Sin’s desire is to control us.

“A lot of women have learned how to quietly manipulate and control their husbands with their body language and cold shoulder/stone walling attitudes. You would think all of the controlling women were loud and obnoxious. Sadly, I have seen the opposite to be true as well. It’s a shame, too.”

“By disagreeing with them and trying to get their own way with everything. A controlling wife is loud, obnoxious, irritable, short tempered, and looks at her husband’s faults instead of his good side.”

“How? So many ways! By enforcing their own ideas, opinions and ways of doing things on their husbands. It could be little things like with what he wears, the things he eats or bigger things like major decisions and financial matters. Women are bent on controlling their husbands, until they realize it, and yield to the Spirit in their lives then commit to living a submissive, God honoring life and following God’s ways set out in Scripture. It takes a daily commitment to squash down that old controlling nature and cultivate a heart of submission.”

“Nagging about what he eats, how he spends his time, guilt tripping or bringing up mistakes from the past when the husband does something wrong, and emotional manipulation to get her way, instead of letting him make the final decision.”

“Pointing at other couples. Doing things in secret. Withholding love and intimacy. Ceasing household duties (cooking, cleaning, etc) until she gets her way. Destroying his things to show him what will happen next time he doesn’t listen to her. Getting a one-sided ‘counselor’ to tell him what he’s doing wrong. Talking poorly about him to other people (even worse if it is to children or other family members). Crying until they get their way. Yelling until they get their way. Making a scene in public until she gets her way. Belittling him and making him feel incapable of making his own decisions. Guilt tripping him into things. Pulling Bible verses out of context to show him how he’s wrong (possibly in context but with a bitter attitude).”

“Nagging, crying until they get their way (manipulation), and the silent treatment.”

“By denying them sex. Aristophanes wrote an entire play about it. Lysistrata is considered a classic.”

“Sex. One of the best pieces of advice I received was that sex should never be a reward or a punishment because then your intimacy isn’t about you as a couple but an outside factor. I promised my husband before we got married that I would never withhold sex as a punishment. I don’t understand women who do, and have lost respect for a few that have told me it’s their weapon of choice.”

“Acting mean in public. I have seen a man completely bow down to his wife on something he clearly disagreed on because she was starting to act mean and call him names. He probably didn’t want further embarrassment.”

35 thoughts on “How Wives Try to Control Their Husbands”