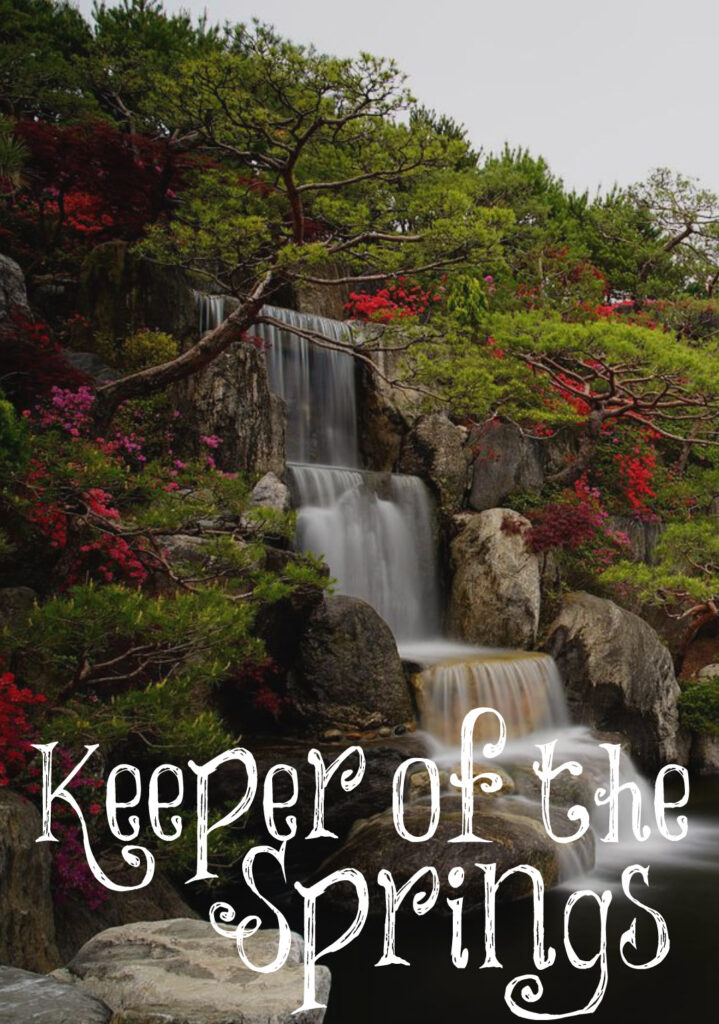 If the Keepers of the Springs desert their posts or are unfaithful to their responsibilities, the future outlook of this country is black indeed.

This generation needs Keepers of the Springs who will be courageous enough to cleanse the springs that have been polluted.

It is not an easy task nor is it a popular one, but it must be done for the sake of the children, and the young women of today must do it.

The emancipation of womanhood began with Christianity, and it ends with Christianity. It had its beginning one night 1900 years ago when there came to a woman named Mary a vision and a message from Heaven.

She saw the rifted clouds of glory and the hidden battlements of heaven. She heard an angelic annunciation of the almost incredible news that she of all women on earth… of all the Marys in history was to be the one who should ever wear entwined the red rose of maternity and the white rose of virginity.

It was told her – and all Keepers of the Springs know how such messages come – that she should be the mother of the Savior of the world.

It was 1900 years ago when Jesus Himself a baby deigned to be and bathed in baby tears His deity …and on that night, when that tiny Child lay in the straw of Bethlehem, began the emancipation of womanhood.

When He grew up and began to teach the way of life, He ushered women into a new place in human relations. He accorded her a new dignity and crowned her with a new glory, so that wherever the Christian evangel has gone for 19 centuries, the daughter of Mary have been respected, revered, remembered, and loved, for men have recognized that womanhood is sacred and a noble thing, that women are of finer clay… have the noblest function that life affords.

And so it is, that in the name of broadminded tolerance a man’s vices have now become a woman’s. Twentieth century tolerance has won for women the right to become intoxicated, the right to have alcoholic breath, the right to smoke, to work like a man, to act like a man – for is she not man’s equal?

Today, they call it “progress” … but tomorrow – oh, you Keepers of the Springs, they must be made to see that it is not progress.

We need Keepers of the Springs who will realize that what is socially correct may not be morally right.

This generation has seen an entirely new type of womanhood emerge from the bewildering confusion of our time. We have in the United States today a higher standard of living than any other country or at any other time in the world’s history.

We have more automobiles, more telephones, more money, more swing bands, more radios, more crime, and more divorce than any other nation in the world.

Modern mothers want their children to enjoy the advantages of this new day. They want them, if possible, to have a college diploma to hang on their bedroom wall, and what many of them regard as equally important – a bid to a fraternity or sorority.

They are desperately anxious that their daughters will be popular, although the price of popularity may not be considered until it is too late.

In short, they want their children to succeed, but the usual definition of success, in keeping with the trend of our day, is largely materialistic.

The result of all this is that the modern child is brought up in a decent, cultured, comfortable, but thoroughly irreligious home.

All around us, living in the very shadow of our large churches and beautiful cathedrals, children are growing up without a particle of religious training or influence.

The parents of such children have usually completely given up the search for religious moorings. At first, they probably had some sort of vague idealism as to what their children should be taught.

They recall something of the religious instruction received when they were children, and they feel that something like that ought to be passed on to the children of today, but they can’t do it, because the simple truth is that they have nothing to give. Our modern broadmindedness has taken religious education out of the day schools. Our modern way of living and our modern irreligion have taken it out of the homes.

There remains only one place where it may be obtained and that is in the Sunday School, but it is no longer fashionable to attend Sunday School.

The result is that there is very little religious education, and the parents who lack it themselves are not able to give it to their children – so it is a case of “the blind leading the blind,” and both children and parents will almost invariably end up in the ditch of uncertainty and irreligion.

As you think of your own mother, remembering her with love and gratitude – in wishful yearning or lonely longing… I am quite sure that the memories that warm and soften your heart are not at all like the memories the children of today will have…

It would be such a pity if all that one could remember would be the aroma of toasted tobacco or nicotine and the offensive odor of beer on the breath!

The challenge to twentieth century motherhood is as old as motherhood itself. Although the average American mother has advantages that pioneer women never knew – material advantages (education, culture, advances made by science and medicine), although the modern mother knows a great deal more about sterilization, diets, health, calories, germs, drugs, medicines, and vitamins, than her mother did, there is one subject about which she does not know as much – and that is God.

The modern challenge to motherhood is the eternal challenge – that of being godly women. The very phrase sounds strange in our ears. We never hear it now.

We hear about every other kind of women – beautiful women, smart women, sophisticated women, career women, talented women, divorced women, but so seldom do we hear of godly women – or of a godly man either, for that matter.

I believe women come nearer fulfilling their God-given function in the home than anywhere else.

It is a much nobler thing to be a good wife than to be Miss America.

It is a greater achievement to establish a Christian home than it is to produce a second-rate novel filled with filth.

It is a far, far better thing in the realm of morals to be old-fashioned than to be ultramodern.

The school is making no attempt to teach the principles of Christ. The Church alone cannot do it. They can never be taught to a child unless the mother herself knows them and practices them every day.

If you have no prayer life yourself, it is rather a useless gesture to make your child say his prayers every night.

If you never enter a church, it is rather futile to send your child to Sunday School.

If you make a practice of telling social lies, it will be difficult to teach your child to be truthful. If you say cutting things about your neighbors and about fellow members in the church, it will be hard for your child to learn the meaning of kindness.

The twentieth century challenge to motherhood – when it is all boiled down – is that mothers will have an experience of God… a reality which they can pass on to their children. For the newest of the sciences is beginning to realize, after a study of the teachings of Christ from the standpoint of psychology, that only as human beings discover and follow these inexplorable spiritual laws will they find the happiness and contentment which we all seek.

A minister tells of going to a hospital to visit a mother whose first children had been born. She was distinctly a modern girl. Her home was about average for young, married people.

When I came into the room, she was propped up in bed writing.

“Come in,” she said smiling. “I’m in the midst of house-cleaning and I want your help.”

I had never head of a woman house-cleaning while in a hospital bed. Her smile was contagious – she seemed to have found a new and jolly idea.

“I’ve had a wonderful chance to think here,” she began, “and it may help me to get things straightened out in my mind if I can talk to you.”

She put down her pencil and pad and folded her hands. Then she took a long breath and started: “Ever since I was a little girl, I hated any sort of restraint. I always wanted to be free. When I finished high school, I took a business course and got a job – not because I needed the money – but because I wanted to be on my own.

“Before Joe and I were married, we used to say that we would not be slaves to each other. And after we married, our apartment became headquarters for a crowd just like us. We weren’t really bad – but  we did just what we pleased.”

She stopped for a minute and smiled ruefully. “God didn’t mean much to us – we ignored Him. None of us wanted children – or we thought we didn’t. And when I knew I was going to have a baby, I was afraid.”

She stopped again and looked puzzled. “Isn’t it funny, the things you used to think?” She had almost forgotten I was there – she was speaking to the old girl she had been before her great adventure.

Then remembering me suddenly – she went on: “Where was I? Oh, yes, well, things are different now. I’m not free any more and I don’t want to be. And the first thing I must do is to clean house.”

Here she picked up the sheet of paper lying on the counterpane. “That’s my house cleaning list. You see, when I take Betty home from the hospital with me – our apartment will be her home – not just mine and Joe’s.

“And is isn’t fit for her now. Certain things will have to go for Betty’s sake. And I’ve got to house clean my heart and mind. I’m not just myself – I’m Betty’s mother. And that means I need God. I can’t do my job without Him. Won’t you pray for Betty and me and Joe, and for our new home?”

Mothers in great houses and in suburban cottages who are meeting the age old challenge – that of bringing their children to the love and knowledge of God.

And I seemed to see our Savior – with His arms full of children of far-away Judea – saying to that mother and to all mothers – the old invitation so much needed in these times: “Suffer the little children to come unto me and forbid them not for of such is the kingdom of God.”

I believe that this generation of young people has courage enough to face the challenging future.

I have every confidence that they are anxious to preserve the best of our heritage, and God know if we lose it here in this country, it is forever gone.

I believe that the women of today will not be unmindful of their responsibilities; that is why I have dared to speak so honestly.

Keeper of the Springs, we salute you!

(Oh, if he could see America today…He would weep.)

The aged women are to teach the young women “to be discreet, chaste, keepers at home, good, obedient to their own husbands, that the word of God be not blasphemed.”
Titus 2:5