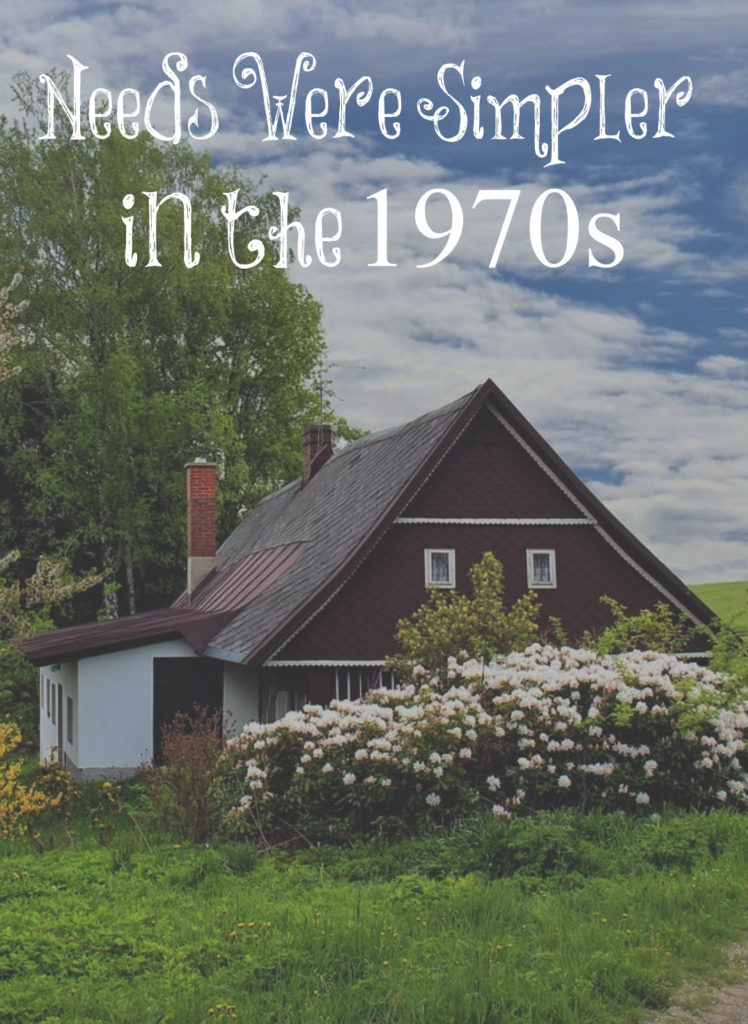 The other day on Facebook, I posted a tweet comparing the cost of living in the 1970s to life in 2021. Homes are much larger now. Most families own two cars which are expensive with the upkeep and insurance, whereas they used to own one. More women are using daycare rather than staying home with their children. There was no cell phones and limited cable. People didn’t eat out like they do now and vacations weren’t often. The needs were much simpler in the 1970s. There also weren’t children’s sports that cost a fortune.

At the end of the tweet, I asked, “There needs to be two incomes for mothers to stay home, why?” Here are some of the best comments under this tweet:

“I get to stay home. It is all about priorities. We have two cars, a 1500 sq. ft. home, one vacation (if lucky), two cellphones, one TV, one maybe two dinners out a month, and no daycare. We could even be more frugal, but it’s surprising the money you save when cooking at home, having time to garden and can, and providing for your family even without a ‘job.’ I am so thankful I get to do what I do.”

“We have two cars both paid off that are 20 and 18 years old. Our home is 860 square feet. We have had one vacation in 8 years. We do have cell phone but no home phone. We do not have cable. We get take out about two times a month. I am a SAHM so no daycare. These things aren’t necessarily wrong. But we need to put God first in all we do. Honor God and our husbands and be proud keepers of our home.”

“I had the advantage of an extremely financially poor childhood, so I was accustomed to living a frugal life. When I married and we had one average middle class salary, I found it easy to stay at home, raise the kids, and manage on one income! I had many friends who would insist you ‘had to have two incomes’ to survive. I was completely confused. I analyzed the difference in our lives. They had new cars; I drove the same one for 13 years. They had more STUFF, and we had more PEACE. I would be beyond depressed if I had traded those days of raising our children for STUFF. None of which they still have. I have all the memories, and they don’t after going to work and being too tired to love and care for my family.”

“I have two cars both paid with cash. Two phones for me and my husband. Building our own house hopefully out of pocket (thanks to milling our own lumber and my husband is a plumber by trade. We barter out plumbing work for what we won’t be able to do with our friends in a different trade.) We haven’t had a vacation since 2014 and don’t want one. We are homebodies. We don’t have cable but love old-fashioned movies. We have kids at home on one income. We also farm. We spend a lot of time together and wouldn’t have it any other way.”

“One income. 3,200 sq. ft. home. One car. Five kids at home. No daycare. No cable. Two cell phones. One vacation every other year. We eat out one to two times a week. It’s about priorities. I know couples with no kids that are ‘barely making it’ on an income much more than ours.”

“There ‘needs’ to be two incomes for mom to stay home because many have bought into the lie that they ‘need’ more to survive. The focus is no longer on what is best for the long-term growth and development of the children but rather, “How can we make and amass more money so we can provide a ‘better’ life and buy more ‘things’?” Contentment has gone out of the window. We want more. But more is not always better.

“Exactly. When we broke down the financial cost of me working, paired with the emotional cost of me not being as available to my kids and husband, it wasn’t worth it. Childcare, quick meals, cleaning services, etc. added up quickly.”

“I’ve never understood people that basically work for the cost of child care and gas. Like, what are you gaining? All you’re doing is losing time with your children.”

But godliness with contentment is great gain.
1 Timothy 6:6