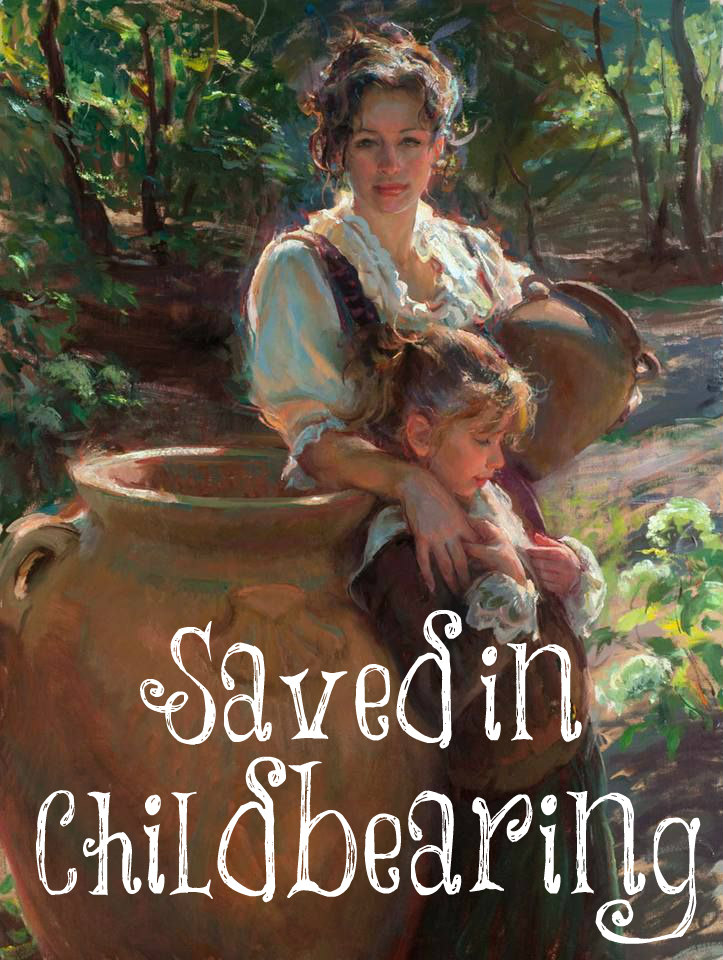 Does this verse mean that only women who have children will be saved or does it mean that all women will be saved because of the Christ’s birth or does it mean something different? Let’s see how the commentaries of old interpreted this verse which follows the verses that command women to “learn in silence with all subjection…not to teach nor usurp authority over the man but to be in silence for Adam was first formed…and Adam was not deceived…”

“St. Paul, now anxious lest he had wounded with his severe words and stern precepts his Ephesian sisters in Christ, closes his charge to women with a few touching words, bright with the glorious promise they contained. Though their life duties must be different from those of men—yet for them, too, as for men, there was one glorious goal; but for them—the women of Christ—the only road to the goal was the faithful, true carrying out of the quiet home duties he had just sketched out for them. In other words, women will win the great salvation; but if they would win it, they must fulfill their destiny; they must acquiesce in all the conditions of a woman’s life—in the forefront of which St. Paul places the all-important functions and duties of a mother” (Ellicot’s Commentary).

Yes, women, our “life duties must be different from those of men” contrary to popular opinion today.  The “quiet home duties” is exactly where the Lord wants our work to be done. This is the “destiny” the Lord has called us to and it’s a good one! Of course, we know that salvation only comes by believing in Jesus Christ and not in anything we do but once we believe, He does require us to walk in obedience to what He has called us to do. This is where we will be the most effective for His Kingdom!

No, it doesn’t mean that we will ever be perfect but we no longer live lifestyles of sin and rebellion. When we are convicted of something, we do everything we can with Christ’s power working mightily within us to repent (turn from) the sin. Awake to righteousness, and sin not (1 Corinthians 15:34).

“The apostle means to show this – that in all her pain and sorrow; amidst all the evidence of apostasy, and all that reminds her that she was ‘first’ in the transgression, she may look up to God as her Friend and strength, and may hope for acceptance and salvation… The object of the apostle evidently is, to show that woman must continue in the faithful service of God if she would be saved – a doctrine everywhere insisted on in the New Testament in reference to all persons. She must not imitate the example of the mother of mankind, but she must faithfully yield obedience to the laws of God until death” (Barnes’ Notes).

The “mother of mankind” rebelled against her role as help meet and being under the authority of the Lord. We are instructed to not do the same but instead, obey what God has commanded for us to do. In Hebrews, we are warned that we must believe until the end. Take heed, brethren, lest there be in any of you an evil heart of unbelief, in departing from the living God (Hebrews 3:12). In 1 John, we are commanded to obey the Lord. And he that keepeth His commandments dwelleth in Him and He in him (1 John 3:24).

“Moreover, I think it is implied indirectly that the very curse will be turned into a condition favorable to her salvation, by her faithfully performing her part in doing and suffering what God has assigned to her, namely, child-bearing and home duties, her sphere, as distinguished from public teaching, which is not hers, but man’s (1 Timothy 2:11, 12). In this home sphere, not ordinarily in one of active duty for advancing the kingdom of God, which contradicts the position assigned to her by God, she will be saved on the same terms as all others, namely, by living faith” (Jamieson-Fausset-Brown).

The way we live our lives prove our faith. “Child-bearing and home duties” are the sphere of women’s work. As C.S. Lewis wrote, “The homemaker has the ultimate career. All other careers exist for one purpose only – and that is to support the ultimate career.” Yes, by far the majority of Christian women will marry and bear children but then women naturally ask about those who don’t marry or can’t have children.

Does this give them the green light to go to college and get a career? I don’t know. Most colleges and universities are godless institutions that teach worldly wisdom which is something we are warned to avoid in the Bible; for bad company corrupts good morals. This is going to have to be something they prayerfully consider, especially since they may get married some day. They don’t want their career and debt to interfere with their potential future marriage, bearing children, and home duties.

Now, remember, these verses and mandates are for Christian women, not secular ones. Women who don’t love the Lord can do whatever they want because they aren’t living to please the God who created them.

In the Bible, there were some women who worked from their homes. Lydia made purple material. The Proverbs 31 woman made sashes and girdles in her home. Priscilla was a tentmaker with her husband and most likely made them in their home. Rachel was a “shepherd” but I’m sure she was close to her home since she was still living with her father. There’s no mention of this being a “job” for Rachel but something she did to help the family until she got married but not ONE of them was submissive to a man that wasn’t their husband (a boss) nor did they leave their children in the care of strangers for hours every day.

I enjoy watching the Duggar show Counting On. The oldest daughter, Jana, is 27 years old and still living at home. I see her doing home and decorating projects, helping around the home and with the children, enjoying time with her siblings, going on missions trips, and all kinds of various things. I also watch Hallmark movies. All the women are career women and there is never a woman in the home with babies and caring for them. Jana’s life seems a lot closer to what the Lord would have single women doing rather than pursuing careers, in my opinion. She is waiting on the Lord’s timing to bring a man into her life. All of the older Duggar daughters stayed busy around the home before marriage, then married, and began having children, if they were blessed with them.

Some of Nancy Campbell’s and Debi Pearl’s daughters have businesses out of their homes. I know women who sell makeup, nutritional products, cleaning products, hair accessories, clothing, and other things from their homes so they can still be home with their children and husbands. If women in the Bible could do it, so can you, if you need the extra income.

Being in the home and attending to it and to children is so much more feminine and what godly women were created to do! Even married women without children can find many things to do in and around the home to keep themselves busy instead of going to a job all day and working in submission to a boss. The Duggar women were never pushed to get higher education and find careers. Home is what God created women for physically, emotionally, mentally, and spiritually.