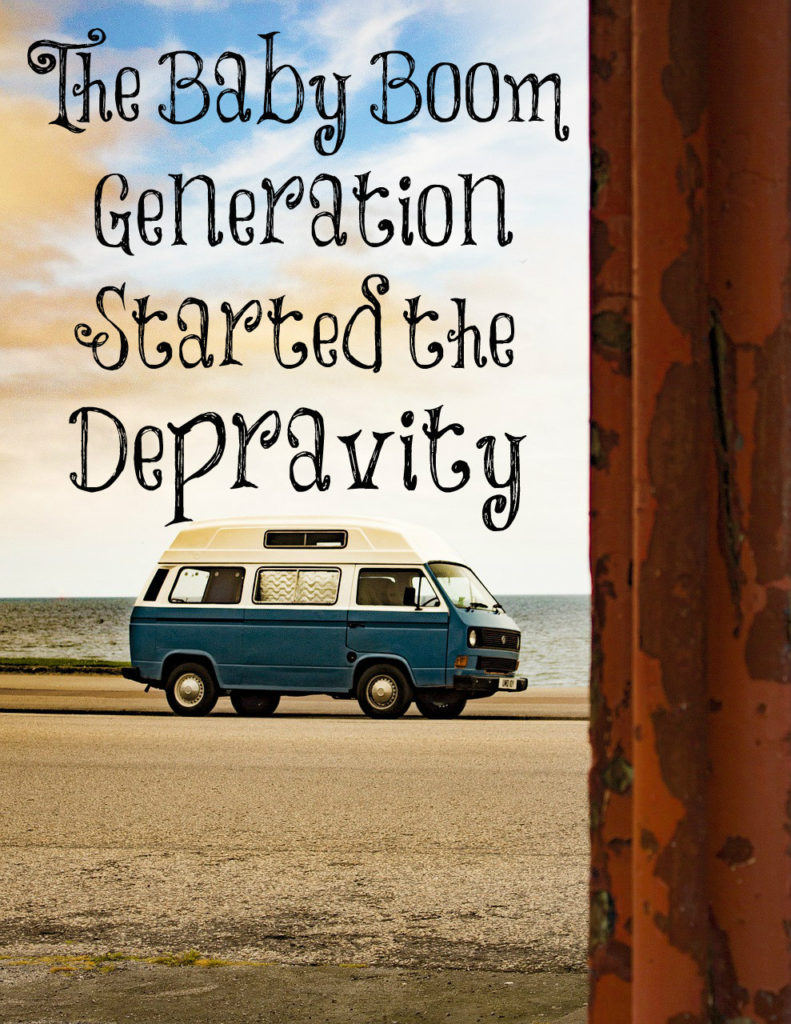 I am from the baby boom generation. My parents were the last decent generation. Most of them grew up in intact families, the majority of people worked hard (they had to or they would starve) and only bought what they could afford, mothers were full-time homemakers, and everyone knew what was right and what was wrong.

Then came the sexual revolution in the 60s. Monogamy was boring, women needed to become like men and get away from their homes and children, government “owed” them free stuff, and if one wasn’t happy in the marriage, then divorce and sadly, all of these things have infiltrated the churches. It was a poison (sin) that has continued to grow stronger, more evil, and more pervasive.

So our country is now like Sodom and Gomorrah. Many of us are like Lot: “For that righteous man dwelling among them, in seeing and hearing, vexed (tormented) his righteous soul from day to day with their unlawful deeds” (2 Peter 2:8). I was watching the playoff basketball game the other night for a few minutes and saw two wicked commercials during the game. One promoted gay marriage and had two women kissing and the other one promoted the women’s basketball league by showing pictures of the Women’s March, gay pride, and sponsored by Planned Parenthood. This torments my righteous soul (and yes, I am righteous because I am clothed in Jesus Christ).

We are called to be set apart and holy even if we live in Sodom and Gomorrah. As we see churches grow lukewarm (become more like cruise ships instead of battleships) and give up truth for something more palatable to the masses, we must not allow the same thing to happen to us.

Stay strong in the Lord, women. Be in the Bible daily and allow God speak to you from it. Pray fervently for the saints to be faithful. (Have you ever noticed how often the Apostle Paul encourages us to pray for the saints?) Dwell on the good and the lovely in the land and don’t allow the pollution of the world into your home. Continually speak truth to your children and marinate them in Jesus. Let them see the joy of Him in your life!

We were never promised a “godly” nation and we are far from one now but we must never lose hope since King Jesus is still on His throne and He promises to never leave nor forsake us.

The Lord knoweth how to deliver the godly out of temptations, and to reserve the unjust unto the day of judgment to be punished.
2 Peter 2:9

2 thoughts on “The Baby Boom Generation Started the Depravity”