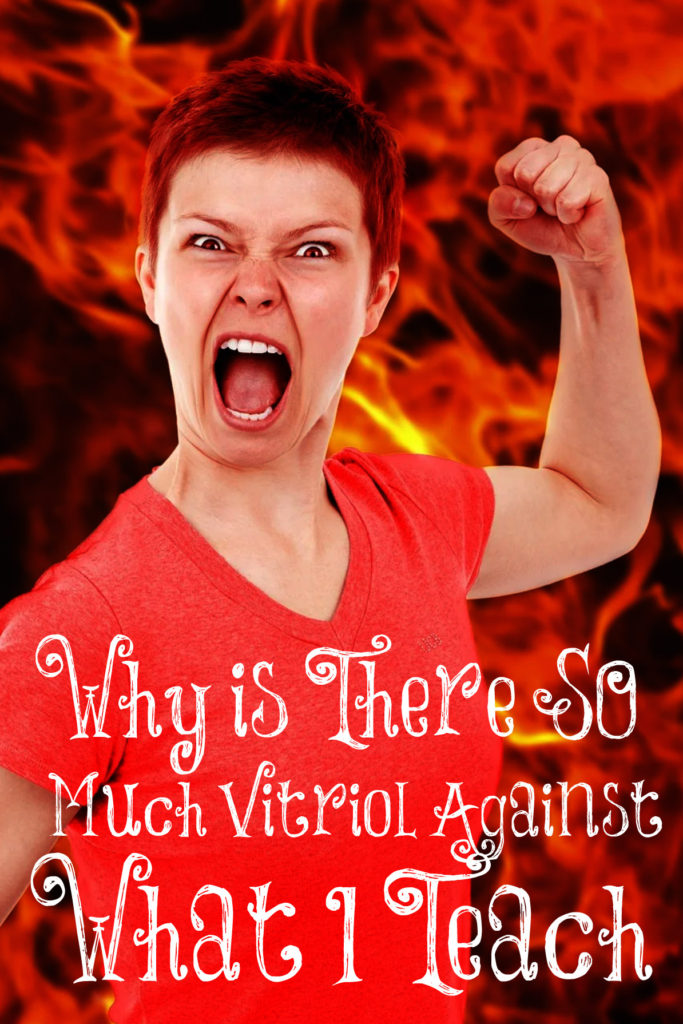 A few days ago, Eric Conn interviewed me for his Hard Man podcast. (I will let you know when it’s posted.) One question he asked me was why I thought I received such vitriol in my comment section, especially on Twitter. (I was SO thankful when Twitter finally gave me the option to no longer allow comments.) He told me had never seen such vile and slanderous comments. I asked the women in the chat room why they thought this was true, and here’s how some answered:

“Speaking truth, and particularly truth that is obvious and that the culture is trying desperately to erase, brings out the strong, rabid reactions in people who don’t want to hear it.” (Lindsay)

“People don’t want to feel like what they’ve always been told and believe is wrong. Women with careers who have achieved a lot don’t want to face that they’ve made their own lives a lot harder (and their families) by achieving worldly success, because even if it’s just for a little bit, it feels good. If they truly admit what you’re saying is the better way, then what happens to all the accomplishments that have been lavished on them from bosses and peers? It can be a tough pill to swallow.” (London)

“Because God’s laws are written on our mind and on our heart (Hebrews 8:10). And since most women and men want to suppress the truth (Romans 1:18-32), they hate what you say and the truth of God’s word you proclaim.” (Kim)

“It’s because it’s truth, and they absolutely know it is. It is going to make them angry, because they do not want to accept it. P.S. My husband and I love his podcast! We have been listening to him since day one. That’s so cool he interviewed you.” (Sara)

“Because you’ll speak God’s truth unapologetically. That will always rile up Satan and his minions.” (Margaret)

“Feminists see you as a traitor.” (Carolyn Ann)

“You speak truth. And quite honestly there aren’t a lot of females out there who want truth. Females want to hear they can ‘have it all!’ Husband, career, babies, big home, new cars, huge vacations and on and on; never realizing they are doing nothing well and certainly not to the standard God has set for us in His Word.” (Deb)

“Truth that isn’t spoken out very often anymore and many are completely brainwashed by the indoctrination of our society. Most people my age and younger have been taught exactly the opposite. Woman need to work to provide for their families, education should be run by the state, and that men and woman are equals in the households.” (Chelsey)

“Because we live among a brainwashed society where even ‘Christians’ embrace the lie from the old serpent that woman HAVE a voice on everything.” (Faith)

“I personally thinks it’s because it’s a subject that affects almost every aspect of our lives. It’s how to be a wife, which challenges our relationship with the men in our lives. It’s how to be a mother, which challenges our views of our careers, abortions, birth control, and children in general. It’s also on raising kids, which challenges how and what we are teaching our kids, therefore, how we mold kids into adults. It goes against what we are intentionally and unintentionally being taught from a young age, both males and females.” (Sandra)

“They rage against you, because it’s useless to rage against God. They hate Him, but it’s easier to take it out on you.” (Ana)

I don’t remember how I answered him, but I do know that most women have never heard what I teach and when they do, they think I am trying to take all of their “freedoms” away that feminists fought so hard for, as if I have any power to do this. Yes, many hate God and hate Truth, but it’s sad how many “Christian” women come after me, as if I’m teaching things that are unbiblical or twisting Scripture. No, I try to teach biblical womanhood as clearly as I can according to God’s perfect and unchanging Word. It’s His perfect will for women.

And in nothing terrified by your adversaries: which is to them an evident token of perdition, but to you of salvation, and that of God.
Philippians 1:28