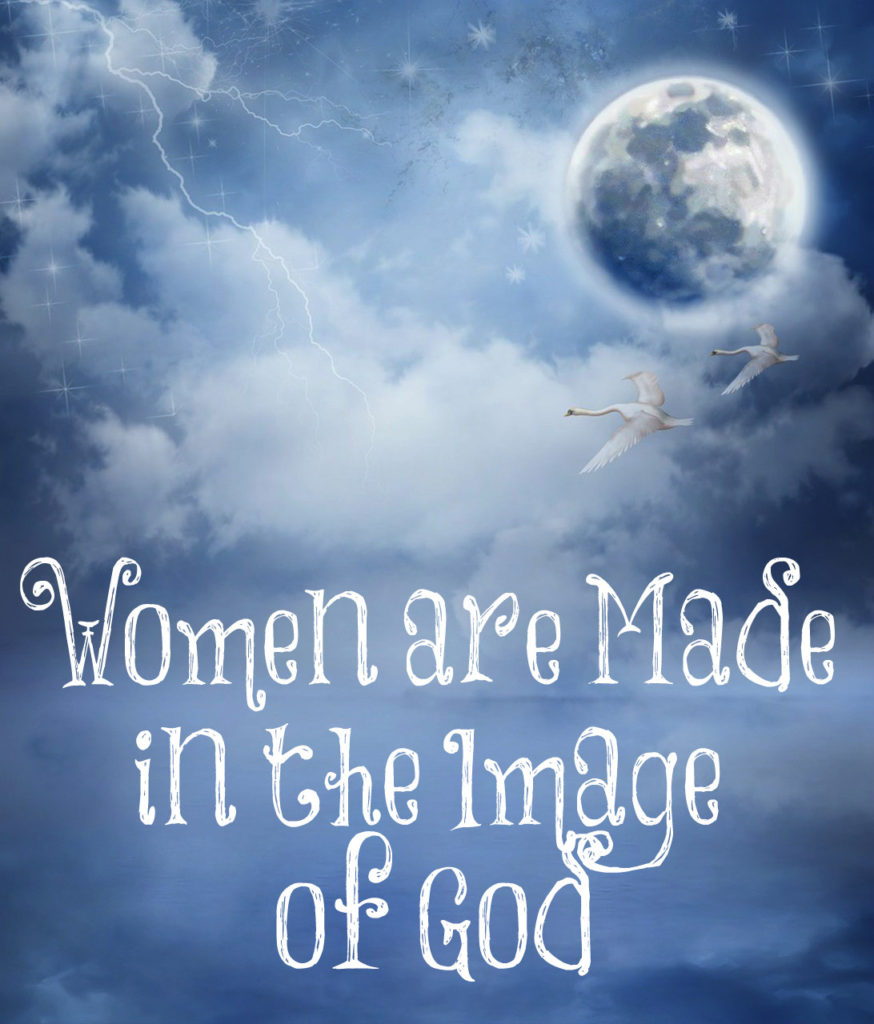 Written By Lindsay Harold with some revisions and additions by my husband, Ken.

Both men and women are made in the image of God, but men reflect the glory of God in a different way than women because men have a similar role to God’s role, which is protector, provider, and leader. Women where designed by God to have a role of mother, nurturer and care giver. Although the roles of men and women do overlap, it is clear from God’s design that men and women are quite different, yet both show aspects of who God is and what He desires from the family of God. God is going about the business of taking one man and one woman and joining them together with all their differences in marriage to most fully reflect His image and glory.

The Bible at times uses the term “man” to mean mankind as a whole – both male and female as “Adam” (Man) stands as the type for all men and women. There are several verses which show us that women are made in God’s image.

Genesis 1:27 God created man in His own image, in the image of God He created him; male and female He created THEM.

Genesis 9:6 Whoever sheds man’s blood, By man his blood shall be shed, For in the image of God He made man.

Here, the word “man” means all of mankind. This verse would indicate that it is only wrong to kill men and not women if women are not created in the image of God also. It is the image of God that sets mankind apart from the animals and makes it a capital offense to kill a human, whether male or female.

Thus, when you have a verse like this one:
Exodus 21:29 “If, however, an ox was previously in the habit of goring and its owner has been warned, yet he does not confine it and it kills a man or a woman, the ox shall be stoned and its owner also shall be put to death.”

This is evidence that killing a woman (through negligence, in this case) bears the same penalty of death as killing a man because both men and women bear the image of God.

1 Corinthians 11:7 For a man ought not to have his head covered, since he is the image and glory of God; but the woman is the glory of man.

I Corinthians 15 uses the analogy of Adam being the first man, created in the image of God, and Christ as the second Adam who came to redeem us. In verse 49, it tells us why this is important. “Just as we have borne the image of the earthy, we will also bear the image of the heavenly.”

Even Jesus’ words make this case.

Matthew 22:19-21 Shew me the tribute money. And they brought unto him a penny. And he saith unto them, Whose is this image and superscription? They say unto him, Caesar’s. Then saith he unto them, Render therefore unto Caesar the things which are Caesar’s; and unto God the things that are God’s.

Good theology is important, and while there are those who wrongly claim men and women are the same and have the same roles, it is also wrong to claim that women are not created in the image of God. We must distinguish between the image of God, which separates mankind from the animals and which makes women a suitable helper for their husbands because they share the same nature, and the different roles which God has ordained for men and women. Men have a role that is more similar to God’s role toward mankind and thus bring glory to God more directly while women have a role that is designed to bring glory to God more indirectly through bringing glory to their husbands. But both men and women share the image of God and are equally capable of bearing the image of Christ through salvation.

HERE is a good article by John Piper on this topic for further study!

2 thoughts on “Women are Made in the Image of God”