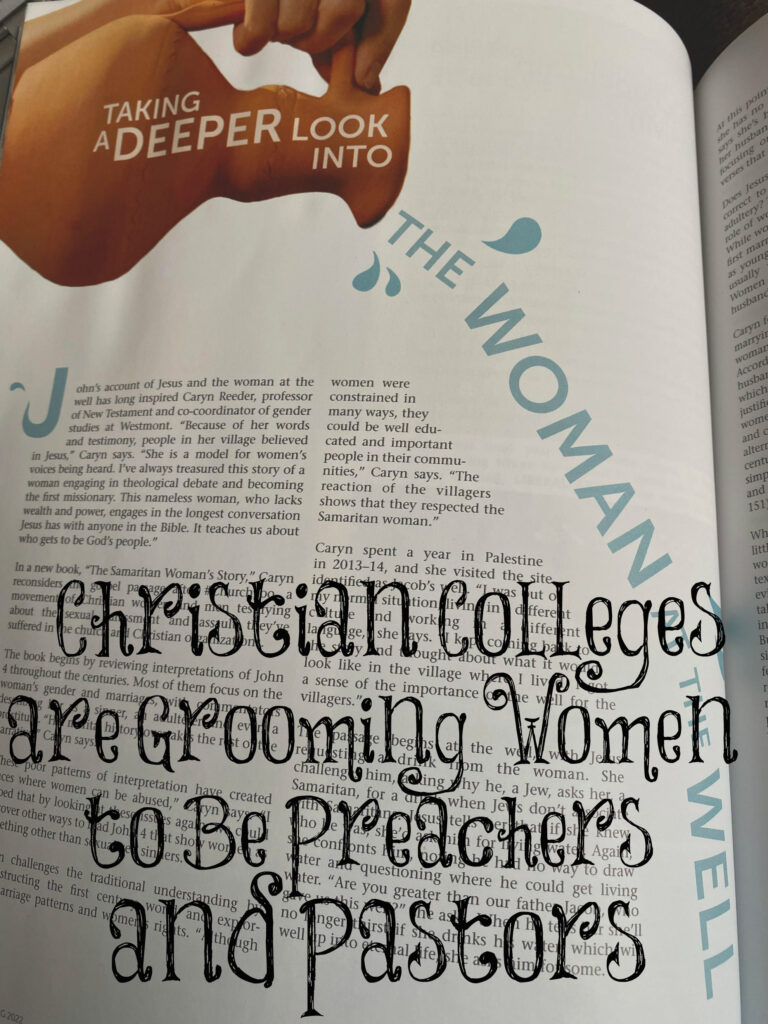 Written By Ken and Lori

We graduated from Westmont College in 1980. I (Lori) wasn’t strong in biblical knowledge so I didn’t know if what I was being taught was biblically accurate or not. I wasn’t wise and discerning back then like most college students. I asked my husband (Ken) one morning if Westmont was falling away from biblical truth when we went there, and he said it was. The crack in the conservative view of the scriptures had already begun.

Yesterday, I received a magazine from Westmont College. I put it in the trash pile but then decided to see what was in it. The first article I saw when I opened it was called “Taking a Deeper Look Into the Woman at the Well.” The article was written about a woman named Caryn Reeder who is a professor of New Testament and gender studies at Westmont. Immediately, red flags were waving at me. How can we keep our children from walking away from biblical truth if we are sending them to Christian colleges which have drunk the Kool aid and are directly teaching against the true biblical roles of women in the Bible and Church?

Here we find a bright, intelligent, and perhaps even loving woman professor teaching our young men and women that it is okay for women to teach men in the Church. And it’s in almost all of our Christian colleges now.  Teachers teaching “gender studies” refuse to teach what the Bible commands the younger women be taught: to be keepers at home, submit to their husbands, and leave the leadership and teaching in the churches to the men. Young minds are being trained just the opposite of what God’s Word teaches in our own Christian schools.

Caryn Reeder wrote this about the woman at the well: “She is a model for women’s voices being heard. I’ve always treasured this story of a woman engaging in a theological debate and becoming the first missionary. This nameless woman, who lacks wealth and power, engages in the longest conversation Jesus has with anyone in the Bible. It teaches us about who gets to be God’s people.”

Most women these days would read that and think, “That’s so cool!” And in many ways the “Woman at the Well” is a very cool story of redemption, as the story shows the heart of Jesus willing to reach out to anyone with His love and truth, even a woman, a social outcast, and a woman five times married and now living with a sixth man. Yet, she was seeking truth and believed Jesus enough to go running back to town to tell everyone that she had encountered the Messiah.

But here is where we diverge from Dr. Reeder. There is a big push in progressive churches to find within the stories of women in the Bible things never found before by theologians and commentators. Rooted in a desire to “elevate women” in the churches and “empower” them is this need to read into these well-know stories a lot of conjecture and postulations that will fit the woke Church narrative that women can indeed be teachers and leaders in the churches. Somehow, the story of the “Woman at the Well” combined with the other stories of the women in the Bible negate the clear teaching of God’s Word.

We are now to believe that the “Woman at the Well,” who has throughout Church history been seen as one who had an extraordinary encounter with Jesus, now becomes the focal point of the story as the first woman theologian and missionary? We cannot let the story just speak for itself and focus on Jesus and God’s great love that transcends gender and social classes, even sin and sinners, to reach all with the love and truth of God? They find things so exceptional in the story pertaining to women that will help justify the real purpose for the book they’re writing, then use the story to help overturn the clarity of God’s Word regarding God’s will for male leadership and teaching in the Church.

Did she have a theological debate with Jesus? No. She talked to him about the knowledge she had concerning worship and the coming Messiah. She asked questions but did not debate with Jesus. Was she a missionary? No. She simply went to the men in the city, told them that there was a man who knew all about her, and said “Come, see a man, which told me all things that ever I did: is not this the Christ?” Even by definition a missionary is one who goes to a foreign land and shares the gospel of Christ. No foreign land and no gospel, but she does ask them to come see and discern if this was not the Christ.

Unfortunately this is the pattern of the new modern church. Mary Magdalene becomes the first evangelist. Pricilla becomes the first woman Bible teacher. Junia becomes the first woman apostle and any woman who had a house church in her home is automatically a pastor. No proof of any of these things is necessary, because if the feminists in the churches can just have the ignorant see how “cool” it is that these wonderful women of the Bible were indeed leaders and teachers in the churches based on embellishments, then they can justify women preaching and being pastors in the churches. Instead of looking at God’s clear commands on this issue, women like Caryn look for examples that try to negate these commands, zero in on them, and then write entire books about it.

To alleviate any doubt as to the true purpose of the embellishments added by Professor Reeder to the story, just listen to the reviewers of her book that she chose. They get it. They understand why she is trying to add to the story a certain “twist” to make it say far more than it does, so the modern day Christian woman has a license to violate the Word of God and teach men, preach, and be elders.

“If ever a story needs retelling, it is that of the falsely maligned Samaritan woman (John 4). Reeder sets the record straight―the Samaritan woman is not the sexual sinner alleged by previous commentators. Reeder brings to life the woman’s historical circumstances and expertly locates this story within the overarching narrative and theology of John’s Gospel. Reeder reclaims the Samaritan woman’s voice for the church today. Beautifully written, pastors and lay leaders alike will be inspired and encouraged to raise up women theologians, teachers, and evangelists.”

Many female “Bible” teachers want to find some justification for their disobedience to the Word. They adorn by speculation every story about a woman in the Bible and if that is not enough, they focus on women’s abuse as justification why God can no longer want us to follow the words of the apostle Paul or Peter. They tickle women’s ears and create large followings instead of mentoring women as God commands them to do.

We all love the story of the “Women at the Well” where we too identify as sinners and outcasts in need of a Savior. We need to know that Jesus is the Christ who paid the penalty for our sin, died on the cross, rose again, and that all who believe in Him will have eternal life in Him. Nothing Dr. Reeder writes negates Christian women’s primary role of being wives, mothers, homemakers, and being silent in the churches. No, the “Woman at the Well” does not in any way justify women preaching or being pastors. This wasn’t the point of the story at all. Beware of women like this and very wary of sending your children to Christian schools that want to turn your precious gifts from God into disbelievers of the Word.