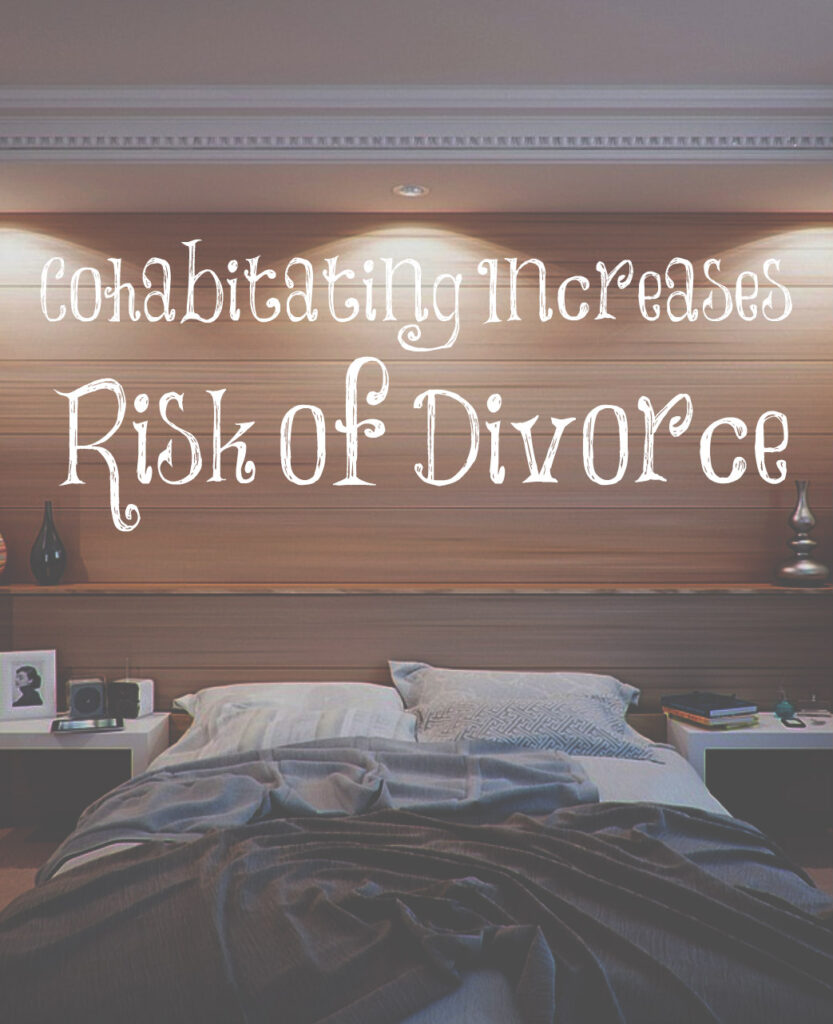 My husband and I were both 22 years old when we married. We both wanted to be married young. If I had my choice, I would have married right out of high school. I had no desire to go to college and have a career. I wanted to marry and have children! The feminist agenda never appealed to me, and I was not raised in a highly conservative home. According to the Wall Street Journal, “Too Risky to Wed in Your 20s? Not if You Avoid Cohabitating First.”

Conventional wisdom since the sixties is that couples should live with each other first, try each other out, make sure the parts fit, and that they are suited for marriage before actually getting married. “Test drive the car first.” We knew this wasn’t biblical. We wanted to marry and then become husband and wife according to God’s plan for us. Turns out as always that God’s plan is perfect!

“As we recently discovered, however, there is an interesting exception to the idea that waiting until 30 is best. In analyzing reports of marriage and divorce from more than 50,000 women in the U.S. government’s National Survey of Family Growth (NFSG), we found that there is a group of women for whom marriage before 30 is not risky: women who married directly, without ever cohabiting prior to marriage. In fact, women who married between 22 and 30, without first living together, had some of the lowest rates of divorce in the NSFG.”

All of my college friends married soon out of college like us. Not one of them lived together before marriage. They all have been married now for over 40 years. All of my mom’s friends were married young and stayed married until death do they part. Not a divorce among them nor among my friends. Why? None of us cohabitated and were committed for life.

Why would cohabitation lead to a higher divorce rate? There’s NO commitment in cohabitation. Commitment is the glue that holds a marriage together. You can’t test drive marriage. You’re either in or you’re not. A relationship without commitment is nothing like a marriage. Plus, when a couple is young when they marry, they don’t have all of the baggage, regrets, and being stuck in one’s ways that older couples most likely have.

God commands young women to marry, bear children, and guide the home (1 Timothy 5:14). This is His perfect plan for them. Yes, some of you are older and still not married. You yearn to be married and have children. You’re sick of being in the workforce. You’re waiting patiently upon God. Just remind yourself often that God is good and His plan for you is good. He will use you wherever you are in life but you must be holy in body and in spirit. He will never bless a life that is living in unrepentant sin. Live for Him today and then trust Him with your future.

Flee fornication. Every sin that a man doeth is without the body; but he that committeth fornication sinneth against his own body.
I Corinthians 6:18