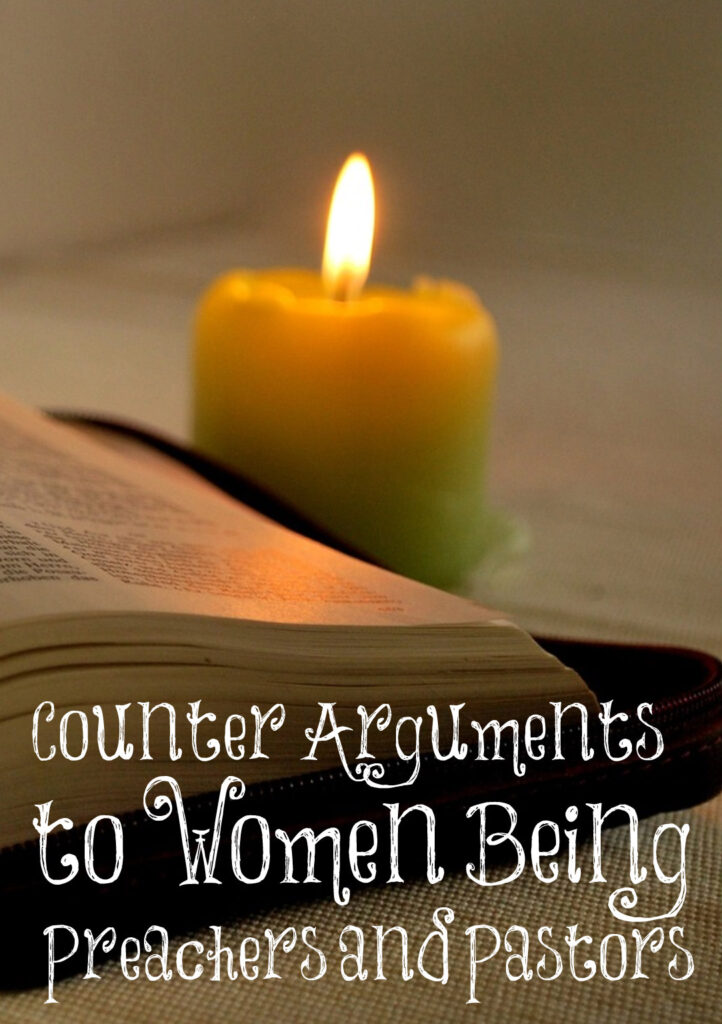 My husband, Ken, helped me on this one!

It is not by accident that all of the Church’s greatest preachers and theologians have understood God’s clear command forbidding women from preaching in the Church.

“Women pastors and women preachers are the most obvious rebellion against the word of God.” (John MacArthur)

“We will add that our surprise is all the greater when women of piety mount the pulpit, for they are acting in plain defiance of the command of the Holy Spirit, written by the pen of the Apostle Paul.” (Charles Spurgeon)

Sadly, many churches are now having women pastors and preachers. You should be wise, women, on why God forbids this so you can have a good response when some in your fellowship start bringing up the many feminist talking points. Many in the churches are trying to undermine and do away with the clear teachings of the Word on this matter.

God’s Word forbids women from preaching and teaching in the churches and having authority over men. In 1 Timothy 2:11-14, we are told the following:

“Let the woman learn in silence with all subjection.” This is God’s will for women in the churches.

“But I suffer not a woman to teach, nor to usurp authority over the man, but to be in silence.” In case women didn’t understand verse 11, God made it very clear and all-encompassing. Women are not to teach in the churches, nor usurp authority over men but to learn in SILENCE.

And what is God’s reason for this? Paul goes back to Creation, long before any culture was established for why women aren’t to preach or have authority in the churches. “For Adam was first formed, then Eve.” Adam was created first and the one in whom authority was invested. He received the blame from God for the first sin that plunged all of mankind into sin, not Eve. It takes little study of the scriptures to understand that God created men to be in authority, to rule the world, to rule the Church, to rule the family, and his wife. God is absolutely a Patriarchal God. Such leadership should give us comfort, not alarm us or push us to contend for control.

Furthermore, “And Adam was not deceived, but the woman being deceived was in the transgression.” You can try to read into this whatever you like but either man is to lead because of Eve’s sin, or God is saying through the apostle that women are more easily deceived. We have a tendency to be led by our emotions and feelings. God created us to be this way for our children with greater empathy. We are nurturers.

Most women preachers are being deceptive with what they teach (twisting Scripture to support what they are doing), but even more troubling is to watch many of them slip away completely from the authority of God’s Word and begin to align themselves with those who would defend homosexuality, abortion, and the likes. Most of them ignored celebrating the overturning of Roe v. Wade but instead continued teachings that advance social justice and wokeness.

The Apostle Paul laid out the order of church gatherings in 1 Corinthians 14. He defines “prophesy” in verse 3: “But he that prophesieth speaketh unto men to edification, and exhortation, and comfort.” The 1828 Webster Dictionary defined prophecy this way: “In Scripture, to preach; to instruct in religious doctrines; to interpret or explain Scripture.” God promised us that He has given us all we need for life and godliness in His Word. There are no more prophets “foretelling” God’s Word but rather preachers “forthtelling” what has already been given to us to better understand and obey. We have God’s Word, and it’s a dangerous thing to add or subtract from it (Revelation 22:18,19).

Near the end of 1 Corinthians 14, we are told: “For God is not the author of confusion, but of peace, as in all churches of the saints. Let your women keep silence in the churches: for it is not permitted unto them to speak; but they are commanded to be under obedience, as also saith the law. And if they will learn anything, let them ask their husbands at home: for it is a shame for women to speak in the church.”

Yes, women can sing in the churches and recite Scripture as a congregation, but other than this, they are to be silent. Some will argue that these verses only mean they can’t preach/teach or have authority over the men. If this were so, Paul would have said women are forbidden only from teaching/preaching, but he clearly used the word “speak” over and over again. Be silent in the churches, women!

If you find that being silent in the church service is onerous, consider that 99 percent of all the men are also silent during the service. They too must meet certain qualifications in order to preach and teach beyond simply being a man. Why is it that these men do not fuss but listen in silence? Is it because if they wanted to speak or felt led to speak, they could? Is it the privilege of the speaking that so aggravates women who desire such a role?  Or is it the same rebellion of Eve desiring to usurp the authority God has established?

Then we turn to qualifications for elders and deacons, the leaders in the churches. They are to be “the husband of one wife” (1 Timothy 3:2 and 3:12). The elders are to be the preachers/teachers in the church and God’s authority structure is clear. Nowhere does it speak of female elders but rather the Word refutes this as to be an elder violates God’s command “not to usurp authority over the man.”

God also made husbands head over their wives (Ephesians 5:23). It becomes chaotic when a wife is to be submissive at home to her husband yet is a teacher/elder in the Church with authority over her own husband. God does not put up with such confusion but is clear in that in both home and church, men are to lead.

We have such clarity from God’s Word on this matter yet some desire to muddy the waters with 20 little feminist pokes, that somehow, taken all together can bring down God’s commands.

Deborah is a favorite because she is one of the very few in all of OT history who actually had God-given authority. Yet, she was a judge in Israel during rebellious times who sat under a tree and made judgements among the people. She never taught God’s Word, and she was never a pastor nor a preacher in a church since the Church had not yet come into existence. Is the moral of the story to be that the Church has become so wicked that women preachers and leaders are necessary? If so, why do these women teachers run alongside of society and champion the things of the world and not the things of God?

Priscilla is often named as the key example of a woman teacher. She and her husband traveled with the Apostle Paul. One time, a man named Apollos was preaching the Word of God but had some error in what he taught, so Priscilla and her husband took him aside and explained the Word more clearly (Acts 18:26). Priscilla was with her husband and was not preaching in a church.

Any Christian woman is welcome to share the Word of God and evangelize one-on-one alongside of her husband. Some argue that here Priscilla is mentioned before her husband’s as being proof that she was more important than he was, yet this is not the case every time they are mentioned. Regardless, why would this be a reason to disregard the rest of Scripture especially when Priscilla would have come under the apostle Paul’s clear teaching on this matter?

Then Phebe, who they say was a deaconess, therefore, she must have preached in the church. “I comment unto you Phebe our sister, which is a servant of the church…” (Romans 16:1). She was a servant of the church, yet deacons are to be “the husband of one wife.” There is zero proof of any message she delivered yet somehow her example is used to negate God’s clear command.

Women teachers claim Junia is a woman apostle; proof positive that a woman led in the early Church. This comes from a brief reference to him: “Salute Adronicus and Junia, my kinsmen, and my fellow-prisoners, who are of note among the apostles…” (Romans 16:7). Paul called Junia a “kinsman” which always refers to a man, so Junia was a man and was “of note (in, by, with, among) the apostles.” Choose the word you like as they all come from the little Greek preposition “en.”

Some manuscripts do use the feminine version of the name Junia but even if she was a woman, what does it mean “who are of note (with, by) the apostles”? There were no female apostles among the twelve, no female priests, nor female Kings of Israel. Jesus could have easily chosen one or two women as His disciples, yet he did not; for God’s leadership is the responsibility of the men in the Church.

We hear that somehow a woman preached the first sermon “Jesus rose from the dead.” The women who went to the tomb, saw it was empty, and two men in “shining garments” told them about Jesus and that He had risen from the dead. They ran to the disciples and told all these things unto the eleven disciples. “It was Mary Magdalene, and Joanna, and Mary the mother of James, and the other women that were with them, which told these things unto the apostles” (Luke 24:10). Telling good news, no matter how good it is, is not preaching or teaching. They “told” the Apostles these things. This was no church service nor church gathering. This argument that Mary preached would be laughable if it was not used to deceive many in our modern feminist churches.

Perhaps the strongest argument against the clear teaching of the Word is the “cultural argument.” That women today are not what they were like back in biblical times, hence one is okay to ignore the clear commands and say they no longer apply. This argument is shattered by the apostle Paul in the context of his command when he appeals to the Garden as the rational as to why women are to remain silent in the churches and not exercise authority over a man (1 Timothy 2:11-14). The garden predates culture so was the Holy Spirit just giving some lame excuse to try to get the Corinthian women in line? No way! God does not use lame excuses but speaks truth all of the time.

Women preaching and teaching in the churches or having authority over men is wrong and unbiblical. There isn’t one example in the entire Bible of a woman who preached nor taught in a church, yet there are clear commands against it. No, this is not a salvation issue but an issue of the authority of God’s Word and obedience to Him. Once a church or Christian University starts down this path of ignoring God’s Word in this important area, it invariably, given enough time, will also begin to compromise in other areas until that church or college looks just like the world. You cannot hold onto Jesus apart from His Word; for He is the Word of God.

Find a church that obeys God’s Word. Wouldn’t it be great if when a woman went to the front of the church, stood behind the pulpit, and began to preach, that all of the men would stand up and leave? My husband did once and would do it again, but it’s shocking that so many are so ignorant on this important matter of theology.

Let the woman learn in silence with all subjection.
1 Timothy 2:11