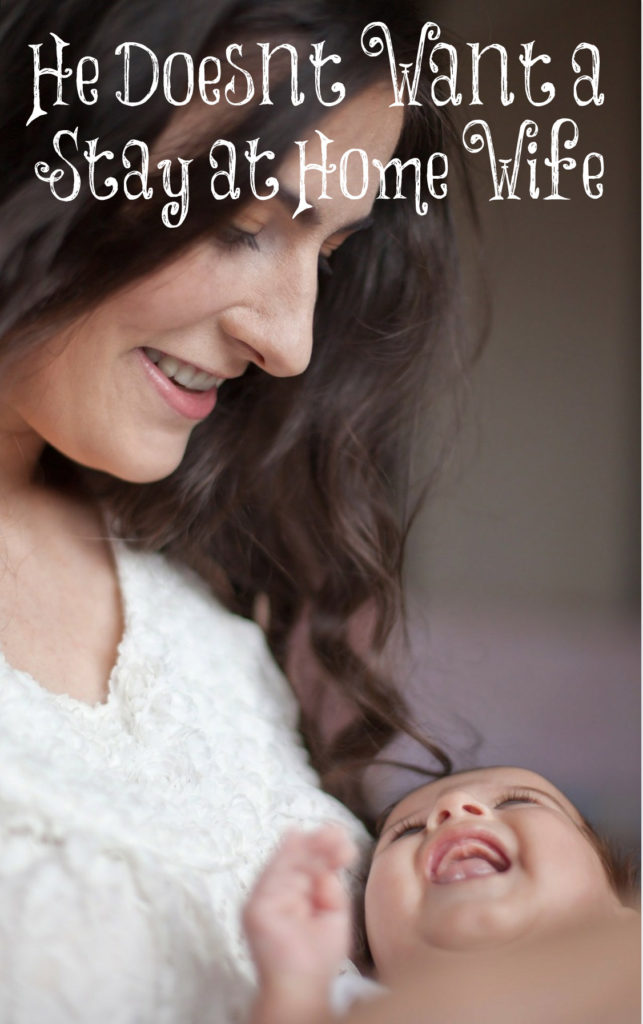 Her baby is ten months old. She gets a year paid maternity leave but since being home with her baby, she no longer has any desire to go back to work. Her husband doesn’t understand that she actually prefers being a mother to her baby rather than having a career.

“We met when we worked at the same company many years ago, and one of the things I was most attracted to was her ambition and tenacity. It’s really surprising to hear that her career isn’t that important to her anymore….Honestly, I don’t want her to quit her job. She earns about the same as I do, and while we could make ends meet on my income alone, it would impact our ability to save, and we’d need to give up one of our cars and cut way back on ‘extras’ that make life more enjoyable. I also just … don’t want a stay-at-home wife. I really admired my wife for her work ethic, and I want her to set a good example for our daughter, too. Seeing her give up like this is really disappointing.

“I gently asked her if she thought her change in attitude could be related to a possible mental health issue or postpartum depression, but she didn’t take that well. She says she only cares about our daughter and that’s where all her energy needs to go right now, and that if I love her, I will let her do this. I do love my wife, and I’m not interested in divorce, but I’m seeing a whole new side of her that I just don’t like or admire. What should I do?” (From this article)

Unfortunately, this isn’t uncommon. Men have been steeped in the feminist doctrine their entire lives too. They see having a career wife and all of the stuff they can have as far greater worth than having their wives mother their own children. He admits they could make it on his income, but it would be a sacrifice, something that is foreign in today’s culture. Even the poorest in our country have the latest cell phones and technology. Few want to sacrifice for the greater good anymore, and our country is crumbling.

He relates her desire to be home with their child as a possible mental disorder. This is how far we, as a culture, have drifted from what is best for children. He desires stuff over what’s best for his own child. Anyone with any common sense at all would easily understand that no one can replace the love and time of a mother in a child’s life. Children need and want their mothers.

He also acts as if she has no work ethic, since she wants to be home with her child. Most mothers will admit, if they’re being truthful, that it’s easier to spend the day at a career rather than being home full time with one’s children. His wife wants to continue to work hard investing her life into her children, however. WHAT can be more important than this?

So he may consider divorce since this is a “whole new side of her” that he doesn’t like nor admire? As Dr. Laura frequently said on her radio program many years ago, “Why have a child if the mother isn’t going to be home to raise him/her?” Sadly, this it the tale of many families these days. Mothers want day care and public schools to raise their children rather than themselves which has led to chaos in our country.

Young women, discuss this important topic BEFORE marriage. Make sure the man you marry wants to have children and wants you to be the one home raising your children. If you married without discussing this and your husband isn’t in agreement, give it to the Lord daily in prayer. He is the one who can convict and change your husband’s mind.

Likewise, ye wives, be in subjection to your own husbands; that, if any obey not the word, they also may without the word be won by the conversation of the wives; While they behold your chaste conversation coupled with fear.
1 Peter 3:1, 2