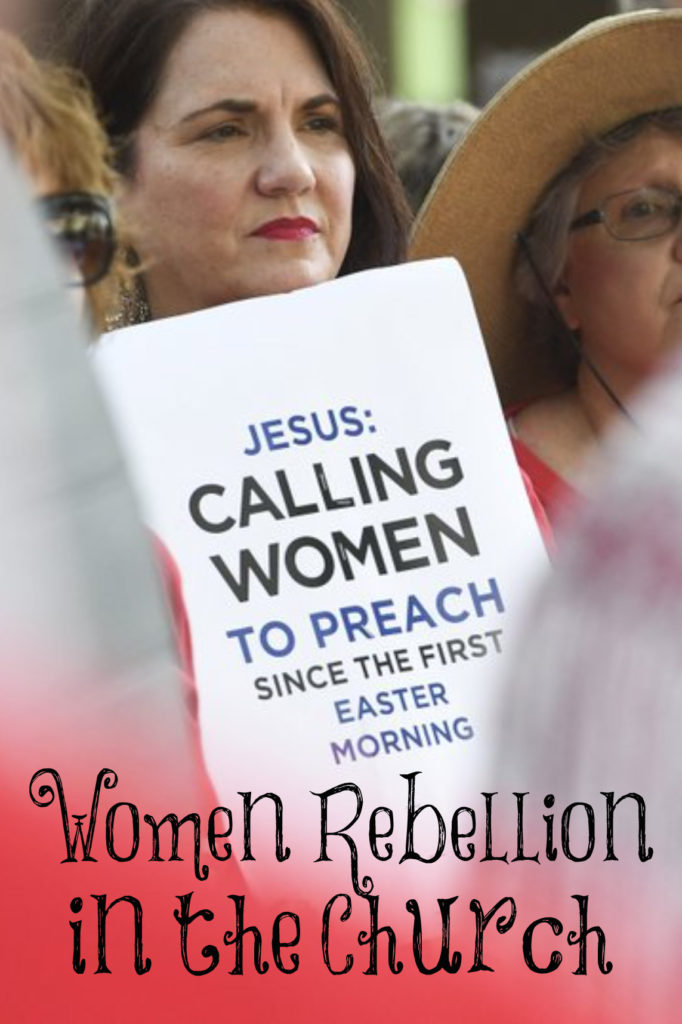 “‘I cannot count the number of women who have reached out to me over the past few years, lamenting and grieving the way women have been and are being treated in some SBC churches and by some denominational leaders,’ Prior added. ‘If these women leave, it won’t be because Beth left. It will be because the men the Baptist Faith and Message says are supposed to lead in Christ-like ways have failed to do so.’

“Prior was referring to the doctrine adopted by the SBC in 2000 which espouses male leadership in the home and the church and says a wife ‘is to submit herself graciously to the servant leadership of her husband.’ It specifies that women cannot be pastors, citing the Apostle Paul’s biblical admonition, ‘I do not allow a woman to teach or to have authority over a man; instead, she is to remain quiet.'” (From an article “Growing Number of Southern Baptist Women Questioning Roles“)

Women despise the roles that God has given to them in the church gatherings and in marriage. This article mentions Beth Moore often and claimed she only teaches women. No, she has preached to men in church gatherings, and she doesn’t teach women biblical womanhood, what God has specifically commanded she teach women. She preaches behind pulpits and teaches “special revelations” she has received from God and other such nonsense. Now because of her and other female preachers, many women believe that women preachers are fine and dandy. In fact, they would rather listen to a female preacher rather than a male one. These female preachers will have a lot to answer for.

Prior, who was mentioned in this article, believe men aren’t leading women in a Christ-like way because wives are commanded to submit to their husbands, and they aren’t allowed to teach or have authority over a man but to be quiet. These women don’t understand God’s Word at all! Jesus, through the Holy Spirit, spoke to the Apostle Paul everything that he wrote unless clearly mentioned, like when he said he wrote by “permission and not by commandment” in 1 Corinthians 7:6 that singleness was preferred. Jesus Christ was the One who set up the roles for wives and women in marriages and the churches, not men.

Do you see that sign that woman in holding in the picture above? No, women didn’t women preach on Easter morning. Not one woman in the entire Bible was said to have preached in the Bible. In the New Testament, only John the Baptist, Jesus, and His Apostles preached God’s Word. Sharing what one has seen or even sharing the Good News with others isn’t preaching. It’s sharing and speaking the truth in love.

Women try to find all sorts of way to twist God’s Word and say women don’t need to be quiet in the churches. They are in rebellion in the churches. Don’t you be one of them! Read and study God’s Word. Listen to solid male Bible teachers. Go to a church that has Bible believing/preaching male pastors and elders. Then you will clearly be able to discern truth from error and false teachers from true, biblical teachers. The days are growing dark. The day of our salvation is approaching. Be as wise as serpents and as innocent as doves.

And that, knowing the time, that now it is high time to awake out of sleep: for now is our salvation nearer than when we believed.
Romans 13:11

9 thoughts on “Female Rebellion Within the Church”