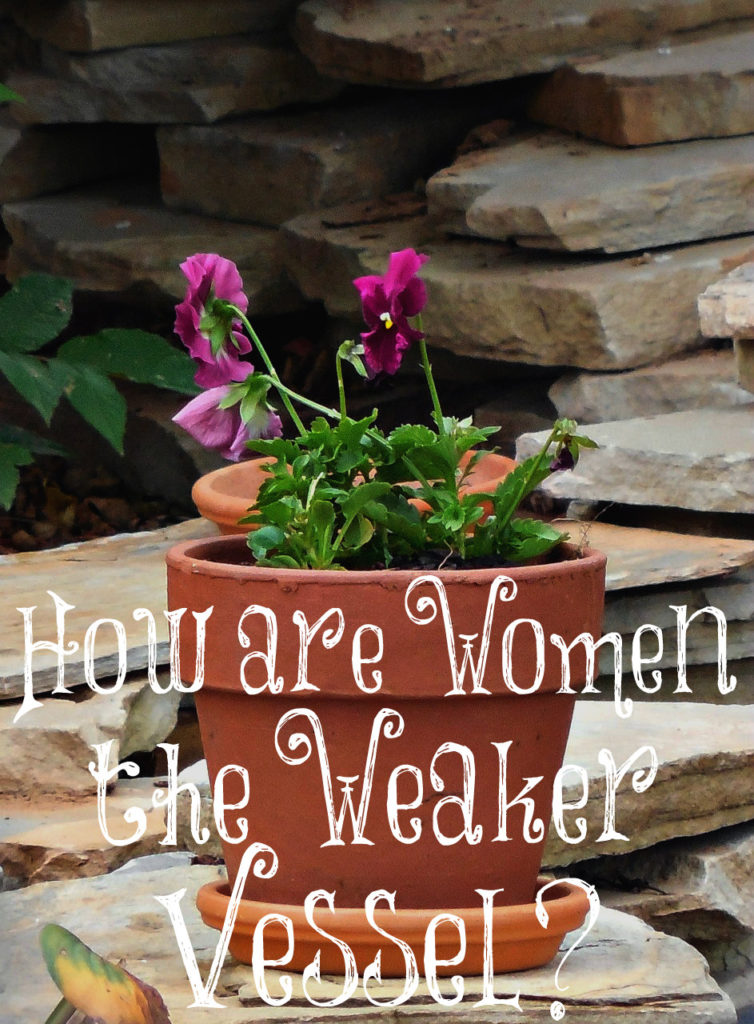 “I heard a sermon by this pastor in which he discusses the original Greek text found in 1 Peter 3:7. He explains that the concept of female ‘weakness’ that Peter talks of is not some innate, biological lack of strength. Rather, it is a role of gentle submission that Christian women choose to adopt because they recognize that there cannot be two alpha leaders in a successful partnership. The ability to embrace this kind of ‘weakness’ demonstrates great strength of mind and spirit and speaks volumes about Christian women’s insight and character,” wrote a woman on Matt Walsh’s post about marriage.

This sounds like a beautiful description of what a weaker vessel means but is it true? Do most Christian women “choose to adopt” the role of gentle submission? Do they readily recognize that there can’t be two alpha leaders in a marriage? (Is marriage ever referred to as a “successful partnership” in the Word?) Yes, choosing to live in submission demonstrates great strength of mind and spirit but does this have anything to do with women being a weaker vessel and not to “some innate, biological lack of strength” as this woman claims? I believe women being the “weaker vessel” is exactly what it states. Women are absolutely weaker physically than men.

Let’s check out what the commentaries of old have to say. Did they believe the “weaker vessel” means that women desire to have a gentle, submissive spirit naturally or does it mean something else?

“The thing which the husband is specially to understand and take into account is that he is dealing with a thing less strong than himself. The whole of chivalry is in these words, and St. Peter (next after Christ) may be considered the founder of it…The weakness here ascribed to the female sex is primarily that of the body, as we shall see when we consider the word ‘vessel,’ though it may, perhaps, indicate frailty in other respects as well. If the word ‘vessel’ is to be here a description of a ‘wife,’ as some contend on 1 Thessalonians 4:4, in a sense in which it does not equally describe a husband, it is difficult to see with what the vessel is compared and pronounced weaker. ‘Dwell with the female as with a more delicate vessel or instrument’ than what? If we answer ‘than yourselves,’ it becomes clear that the husbands are, by implication, less delicate vessels.” (Ellicot’s Commentary)

Yes, men are absolutely less delicate vessels than women. Men are taller and bigger than women in general. This is why there are separate male and female sports. This is why men are the ones who build everything like skyscrapers, freeways, bridges, and houses and are the electricians, plumbers, and mechanics. For people to not admit this is being ignorant of what is plainly obvious.

“Here ‘the weaker’; being so for the most part, both as to strength of body, and endowments of mind; and therefore to be used gently and tenderly, and not be treated with neglect and contempt, or with inhumanity and severity; but as, in every state and condition, the strong are to bear the infirmities of the weak; so a man should bear with, and accommodate himself to the infirmities of his wife, and hide them as much as he can, and not expose them, nor despise her on account of them.” (Gill’s Exposition)

Here again, we have a commentary explaining that the “weaker vessel” does indeed refer to her “innate, biological lack of strength.” In past generations, I am sure everyone knew that this meant that women were weaker physically than men. It’s easily seen all over the place, yet in today’s feminized culture, they have changed it to mean something that it is not. NO, most Christian women do not adopt the role of the gentle submission to their husbands willingly. This is foreign and repulsive to them since most desire to control their husbands!

“By this it is not necessarily meant that she is of feebler capacity, or inferior mental endowments, but that she is more tender and delicate; more subject to infirmities and weaknesses; less capable of enduring fatigue and toil; less adapted to the rough and stormy scenes of life. As such, she should be regarded and treated with special kindness and attention. This is a reason, the force of which all can see and appreciate. So we feel toward a sister; so we feel toward a beloved child, if he is of feeble frame and delicate constitution; and so every man should feel in relation to his wife. She may have mental endowments equal to his own; she may have moral qualities in every way superior to his; but the God of nature has made her with a more delicate frame, a more fragile structure, and with a body subject to many infirmities to which the more hardy frame of man is a stranger.” (Barnes’ Notes on the Bible)

In the Bible, only those men who were 21 years and older were sent off to war. Men are the ones who were created by God to be the protectors of society, not women. Women in general tire much more easily than men and they are simply not as tough physically as men due to muscle mass and women are not as tough emotionally. Here is a secular article that lists all of the ways men differ from women. Some of them are:

Men and women don’t see in the same way (their retinas are different),

Females can verbally express their emotions better than males (duh),

Boys naturally use movement to think (this is why sitting in chairs all day long in school is HORRIBLE for boys),

Boys are more likely to take risks (this is why they were specifically created to be the protectors of societies),

Females are easier to startle (yep!),

Males are more likely to die from an accident than females (yes, because they are the risk takers),

Men are easier to sexually arouse than women (really?),

Men are more motivated by sex than women (this is why women withhold sex against men in punishment), and

Men pursue, women are pursued (just the way it’s supposed to be).

Even in the animal kingdom, males are bigger and stronger than the females. God made men with ten times the testosterone for a reason and He made women with progesterone and estrogen to have and nurture children. We are different. No, we’re not equal (in value and worth, yes, but not in anything else) and it’s perfect since God’s ways are perfect. Let the men fight the wars, fires, and bad guys. I liked it a lot more when it was only men in these roles because it is their God-ordained roles, not women’s.

So all the numbered men of the sons of Israel by their fathers’ households, from twenty years old and upward, whoever was able to go out to war in Israel.
Numbers 1:45

7 thoughts on “How are Women the “Weaker Vessel”?”