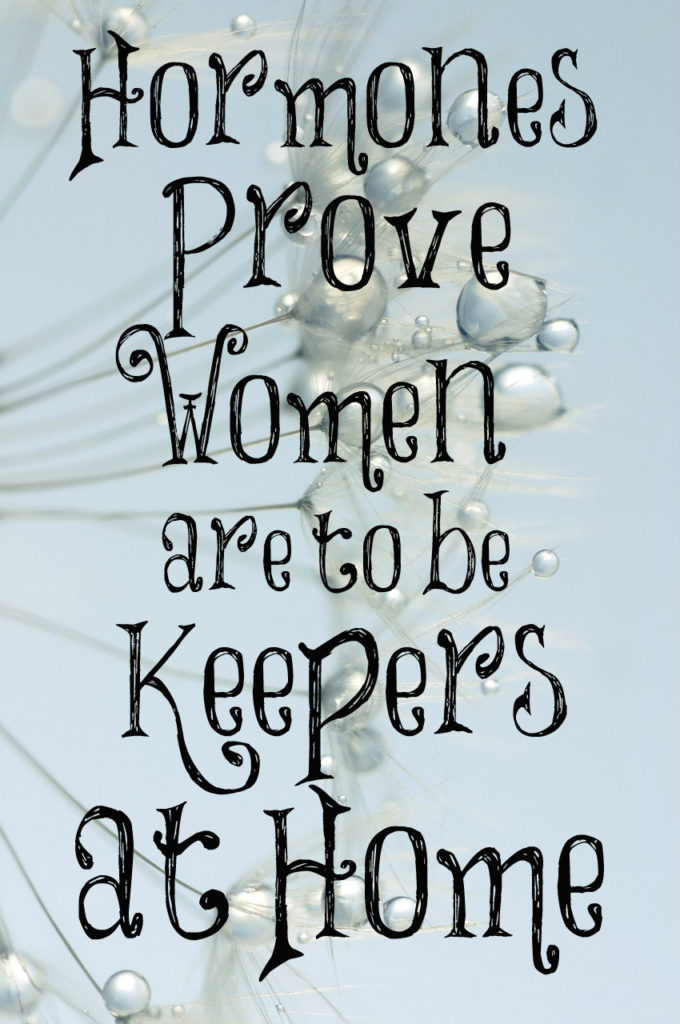 Since my pituitary is low or non-functioning, I have had to go on hormone replacement therapy. I have been having good results using bioidentical hormone replacement therapy (like finally sleeping a lot better and not nearly as many hot flashes after fifteen years!), so I joined a couple of groups on Facebook that have women taking these types of hormones. The women kept recommending the book What Your Doctor May Not Tell You About Menopause by Dr. John Lee. (I highly recommend it to all of you no matter what age you are in order to learn how to bear and raise children in a healthy way that supports their hormones and keeps your hormones healthy throughout life.)

I don’t know anything about Dr. Lee but I know that he’s done a lot of research and helped a lot of people. In Chapter 12, I read something that so powerfully supports the notion that men and women are different, along with their roles, because of their hormones! Their physical makeup is designed for women to be AT home and men to work. Working outside of the home, whether married or not, is very unhealthy for women. Read these paragraphs from this chapter and see how marvelously God has created us perfectly for the roles He has called us to fulfill.

Yang is light and abstract. The yang personality would tend to be active, outgoing, focused, aggressive, logical, and impatient.

The environment of raising children naturally favors the yin or female attributes. The business world naturally favors the yang or male attributes. What happens when a woman finds herself spending her days in an environment that’s very yang, as so many working women do these days? To survive and thrive, she is going to minimize her yin aspects and maximize her yang aspects. Her body will pay attention to these signals and respond accordingly.

The stereotype successful woman executive is slim, trim, and muscular – yang. The stereotype mother figure is ample in breasts, hips, and thighs – yin. These differences in roles work fine when a woman’s life is balanced, when she has ample time and energy to develop both sides. But take a woman who is working full-time, has a couple of kids, and a husband who also works and we have a recipe for imbalance and stress. This woman is going to be pulling on her yang attributes at the expense of her yin attributes. She’s likely to be chronically exhausted, always “on,” never taking time for herself. She is constantly forced to push the limits of her endurance to keep up. She rarely has time to spend quiet, nurturing time with her children or herself, not to mention her husband. In an effort just to maintain her lifestyle, her adrenal glands are constantly pumping out hormones meant to be used sparingly for “fight or flight” situations and they eventually become tired, sluggish, and depleted. Her body gets the message that survival is at stake. Blood sugar becomes constantly unstable. Digestion goes awry so she isn’t absorbing nutrients properly. The ovaries respond by shutting down in favor of survival. When her ovaries shut down, progesterone production occurs only at the adrenals, but they aren’t working and she’s not getting enough progesterone because of her poor dietary habits, so she becomes progesterone deficient and estrogen dominant.

The estrogen dominance causes the all-too-familiar signs of fatigue, depression, little or no desire for sex, weight gain, water retention, headaches, and mood swings. By her late 30s and early 40s, she probably has fibrocystic breasts, uterine fibroids, or endometriosis. The estrogen dominance interferes with thyroid function, which increases her fatigue, so she’s cold all the time and she’s gaining more weight…Even without children, women who get on a career track and develop their yang attributes at the expense of their yin attributes are likely to suffer from hormone balance.

***I am not promoting yin and yang and where these roots come from since I am a believer in Jesus Christ and His ways. I am simply showing you how even the secular world and doctors who study the body and hormones, specifically, come to the same conclusions that the Bible does. The best place for women is in the home! They were not created physically to be out in the workforce.