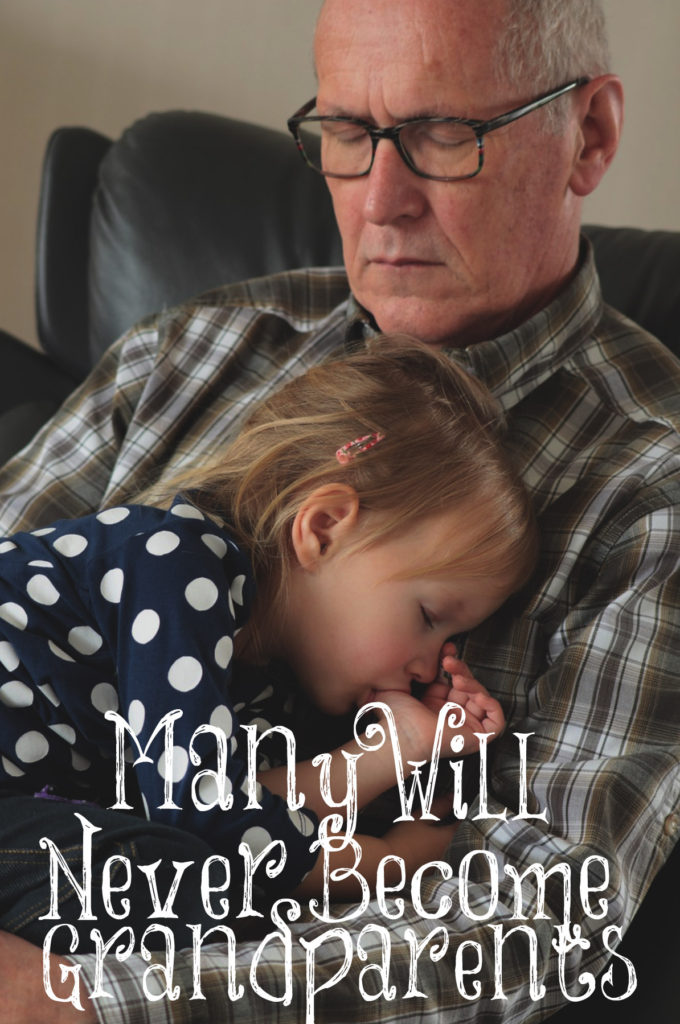 We have too many friends our age (in their 60s) who have children that are either not married or are not having children. These friends WANT grandchildren desperately, but their children aren’t interested. Why is this?

In an article called Thirty, Flirty, and (Not) Thriving, the author, Helen Roy, explains why this is happening:

“This is one of the quiet tragedies of feminism and modernity: the disappearance of intergenerational female friendship. We are now reaping the bitter rewards of a total failure of older American women to convey the inescapable reality of female biology to their daughters and granddaughters. Instead of roadmaps corresponding to reality, millennials were silently handed birth control and college applications; screens took care of the rest. The transvaluation of femininity on the altar of material consumption has normalized a profound lack of charity between women that has been disastrous for us all.”

God wants us to pass down biblical wisdom to our children and grandchildren. They aren’t going to get it from our culture. Our daughters will be told to be independent, travel, go to college, have a career, and make lots of money instead of marry, bear children, and guide the home (1 Timothy 5:14).

Many young women are on birth control these days which is highly dangerous. It is causing infertility and many other health problems for women. They are taught to avoid pregnancy even when married! Women are most fertile in their late teens and twenties, then fertility goes dramatically down. Warn your daughters about this! God calls children blessings, and so should we. They are the blessings that keep on giving.

“We are learning now that parents who outsource moral instruction to the television never become grandparents. In other words, this problem of disappearing parents emerges from a problem of negligent parents. No one was brave or honest enough to tell millennial girls that life isn’t like the movies. A significant chunk of these women will soon pass the point of no return for having kids, and they will face a litany of cascading social and emotional consequences of a lie long believed: namely, loneliness. Put simply, millennials are about to learn the hard way that this cost of endless flirting and thriving is biological denialism, and the cost of biological denialism is death.”

Women, you must teach your daughters the beauty of God’s ways. The greatest way you do this is by showing them. Show them that you love your husband, their father. Be an example to them of a joyful, godly mother. Sure, you are going to go through trials and sufferings. We all do. And sure, there will be many difficult days of mothering, but difficult isn’t bad. God’s path for us isn’t the easy, broad path. It’s the narrow path that leads to life!

Train your daughters to be homemakers from a young age. Teach them how to keep a home clean and tidy, to cook, bake, garden, can, iron, sew, and all that it takes to run a home. Let your husband work with your sons on becoming masculine men who will want to grow up to have families of their own. As your daughters grow older, go through my study guide with them so they can see clearly God’s will for them from His Word. Read the Bible to them from a young age. Have them memorize many verses. Pray with them daily. Take them church faithfully. Homeschool them. You be the one to raise and teach your own children so when they grow up, they will want a family of their own.

Joy Pullman wrote in an article in the Federalist: “The combination of only a man and a woman in a lifelong union is the only way to create more human beings in the most optimal environment for the most important thing for everyone in that family: keeping the faith. A commitment to one’s family nurtures one’s faith.” If you don’t evangelize and disciple your own children while living a godly life, you’re work in raising them was for naught.