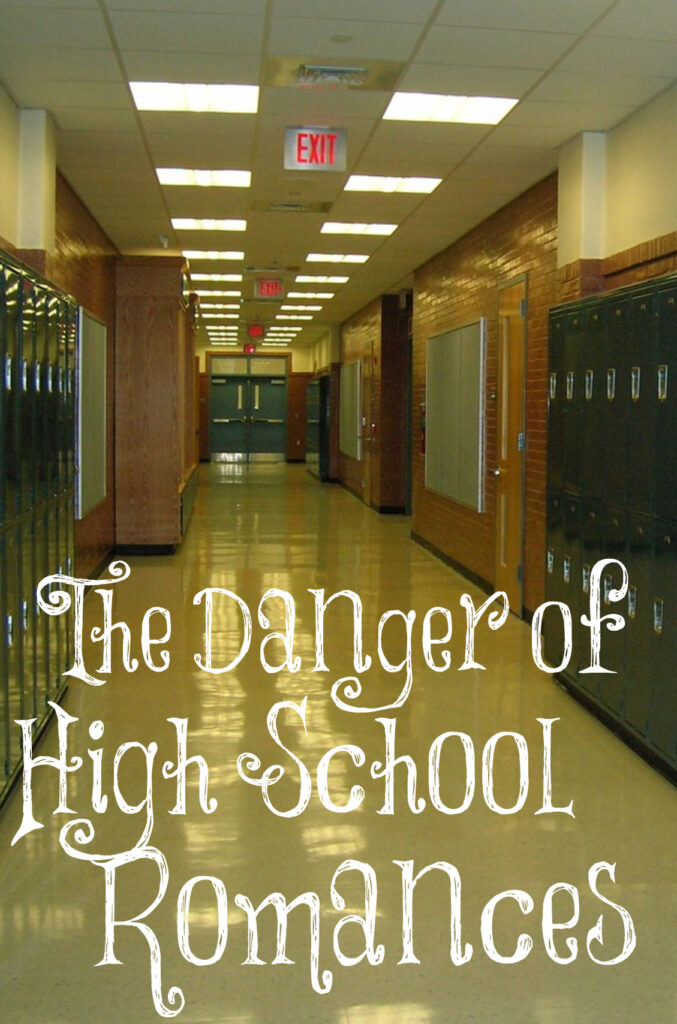 One of my high school friends would tell me about her sexual escapades with her boyfriend. They would go to their empty homes (moms both were in the workforce) and fornicate. She had a number of abortions. It was heartbreaking. She made it seem like it was all so thrilling but all it produced was wretched, rotten fruit. It didn’t seem thrilling to me even back then. I knew I wanted to wait until marriage when a man had committed his life to me.

They’re too young in high school to be emotionally and mentally prepared for a lifetime commitment of marriage. High school relationships are built upon emotions only. There’s no commitment. They’re only following what our highly sexualized culture has pushed them into. The relationships I observed were roller coasters of emotions. It never looked appealing to me. I also saw couples who would get together and completely leave the relationships they had developed with the same sex (non-sexual, of course…sad commentary on our day and age). They invested all of their time into this short-term relationship that led no where good while leaving potential lifetime relationships.

I did have a boyfriend in my junior year of high school and another one in my senior year. Neither of the guys were Christians but they treated me in a good way. I refused to fornicate with them, and they both wanted to marry me. It was awful having to break up with them. They were heartbroken. It wasn’t worth it at all. I always knew I didn’t want to marry them. Having boyfriends was the thing to do, however, or so I thought.

In college, the guys knew that dating was serious and not for fun. I attended a Christian college. The guys I liked didn’t like me, and the guys that liked me, I didn’t like, until my husband came along. God protected me in college, I believe. We had our first date in February of 1980 and married in December of that year. We knew from the time we began dating that our relationship was heading towards marriage.

When we had children, we taught them they couldn’t date until they were old enough to marry, and then were only to date those who they thought they could marry. They didn’t have high school romances. Sure, they had crushes but it never led to anything like a boyfriend and girlfriend relationship. They had to do everything in groups.

High schoolers aren’t mature enough to handle romantic relationships. The relationship is built entirely upon their own needs and wants. It’s a selfishly built relationship. Relationships between men and women are for marriage, period. They’re not for trying each other out sexually as most do nor for a short-term pretend marriage. Many fall into deep depression once a relationship is broken. Some even commit suicide. It’s protection for your children to not develop any relationships with the opposite sex in high school. Nothing good comes from them, only harm.

Here is a great sermon by Jason Cooley on this topic. I encourage you to listen and learn from him. Teach your children the beauty and protection of sexually purity in this wicked, corrupt age in which we live.

Now concerning the things whereof ye wrote unto me: It is good for a man not to touch a woman. Nevertheless, to avoid fornication, let every man have his own wife, and let every woman have her own husband.
1 Corinthians 7:1,2