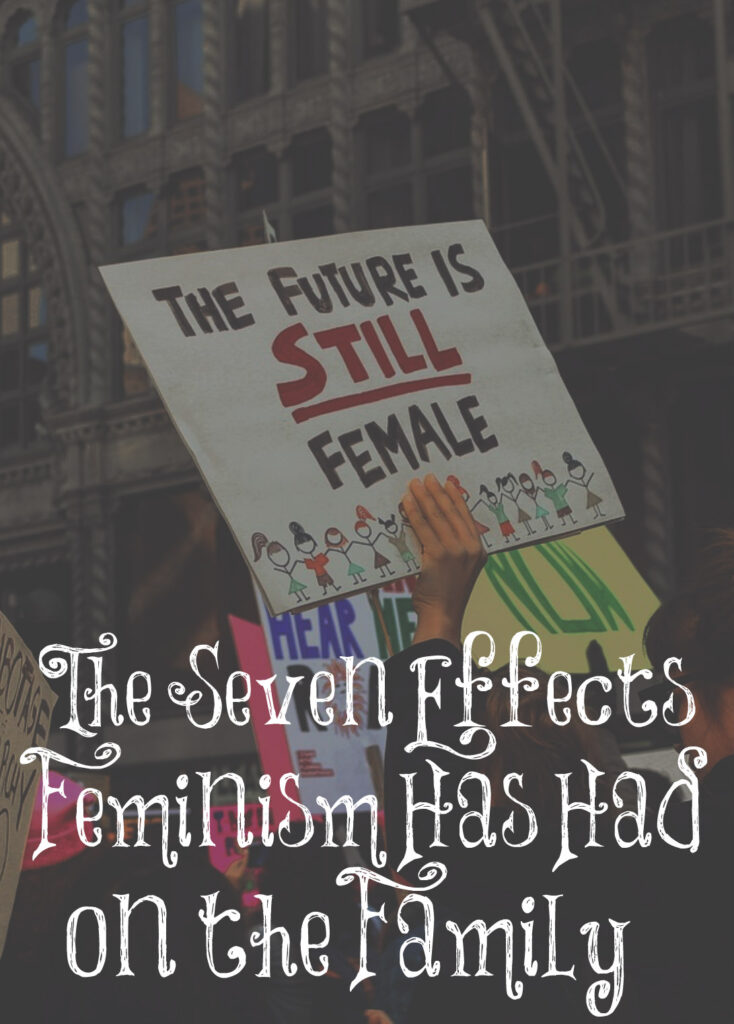 In 1979, Tim LaHaye wrote a book titled “The Battle For the Family.” In this book, he gave seven effects that feminism has had on the family.

Blurs the Distinction Between the Sexes

Creates Unnecessary Dissatisfaction With Being a Housewife and Mother

Can you now clearly see how opposed to God’s will feminism is? It’s made out to be such a wonderful thing for women, but all it has done is cause destruction in its wake. Feminism is the complete opposite of God’s will for women.

Feminism has blurred the distinction between the sexes by getting rid of the roles for men and women. This has resulted in chaos! The fruit of feminism is now being seen in our culture. Little boys can become girls. Little girls can become boys. Girls can do what boys do. Boys can do what girls do. It’s all an imaginary freak show!

Feminism has caused a great dissatisfaction with being a housewife and mother. Many women are choosing not to marry and bear children. Many who do marry are choosing not to have children. They have been made to believe that it’s far better to submit to a boss and work 9:00 to 5:00 each day rather than submit to a husband and care for one’s own children at home. Women have believed lies. Instead of being content loving and serving their families, they are discontent while serving strangers.

How does feminism cause insecurity in women? Instead of living out God’s clearly defined role for them, they are lost and floundering as they pursue jobs away from the home. They’ve entered the man’s world of provider which was his curse from the Fall, and they try to be men. How can this not cause insecurity in women? They weren’t created for the workforce. They weren’t created to be away from their families and home all day long. They are out of their natural, God-given environment.

How does feminism destroy femininity? Feminism is the complete opposite of being feminine. It causes women to disregard their God-ordained roles and pursue men’s role instead. It has caused them to be loud, independent, and promiscuous. Instead of wanting to be home keepers, they are home wreakers. Up to 80 percent of divorces are initiated by women. They are no longer taught anything about being godly women who love their husbands, children, and homes.

How does feminism cause insecurity in men? Since women have left their God-ordained roles and have taken over men’s, men have lost their rightful place in society. And not only in society, but in the churches and at home. Female preachers are taking over the churches. They teach egalitarian in marriages, so wives are taking over the homes. Men were created for leadership positions. They were created to lead, but women have slowly but surely been taking this role away from men.

Lastly, how does feminism make children insecure? Feminism has caused a massive breakdown of the family. Divorce has skyrocketed. Mothers are in the workforce, so children are being raised by strangers. This is the perfect recipe for insecure and emotionally unstable children. Feminism has hurt children the most. Abortions are common. Mothers don’t even want their children. They don’t love children. Many women don’t even want children.

Feminism’s destruction is widespread, even filtering into the churches. Stand against feminism, women, by living out biblical womanhood in front of your family and those in your circle of influence. Live for Jesus. Live in the boundaries that God has given to you. They are good, and they are right. His ways are perfect.