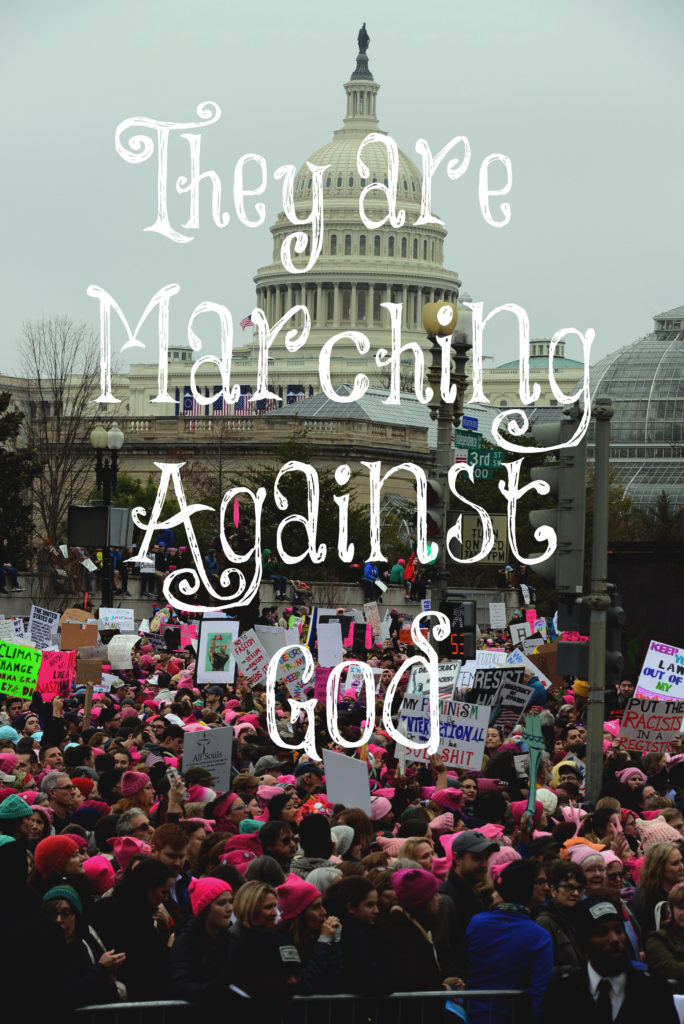 Today, many women will be marching for their “rights” all over the country and their rights have absolutely nothing to do with godliness or God’s will for them. They want nothing to do with God’s ordained authority structure. They want their way and little do they know that they are participating in the destruction of our culture as they listen to their father, the Devil, who is the father of lies.

Here are portions of a great sermon by Alistair Begg. He preached about the perfect roles that God has designed for men and women .

God has given the man the place and role of leadership. He has done this from the beginning. Read what Paul has to say in 1 Timothy 2 and 1 Corinthians 11…What Paul is arguing is from the doctrine of creation…What he makes clear is that God made Eve from Adam. He made Eve after Adam. He made Eve for Adam…He made them equal but He didn’t make them identical. You may have noticed that!…

He made them to go together. He made them to fit together anatomically. Things fit – you will notice one day if you haven’t noticed. And not only physically but psychologically. Their parts, Adam and Eve’s, man and woman’s parts and their roles, are not interchangeable according to the Bible. You may think you’re Mr. Mom but you’re not.

According to God, He has made you wonderfully, different, and purposefully so equal under creation, equal as the heirs of the grace of God, and He has done it this way for the good of humanity because He knows best. He’s the Creator…Marriage is not a human invention. Marriage is God’s plan and pattern for all of time. People know this!

A destroyed culture will eventually have to stand and acknowledge God is God because from the very beginning what is declared is not culturally contained or limited. It is timeless and it is universal…That’s why the challenges of our day are not about superficial things. They’re not about people’s preferences. They’re about the very central issues of the Godness of God and the humanity of humanity.

So the question is then inevitable. Someone will say in the course of conversation, “How did things get so upside down?”…How will you answer without your Bible? Because in terms of man and woman and in terms of human sexuality all of these elements have been badly soured by man’s rebellion and disobedience to God…Serpent comes and deceives Eve and she listens to the serpent rather than to Adam. Adam listens to Eve instead of fulfilling his responsibility to lead Even and neither of them listen to God and the result is disastrous.

Ye are of your father the devil, and the lusts of your father ye will do. He was a murderer from the beginning, and abode not in the truth, because there is no truth in him. When he speaketh a lie, he speaketh of his own: for he is a liar, and the father of it.
John 8:44

13 thoughts on “They are Marching Against God”