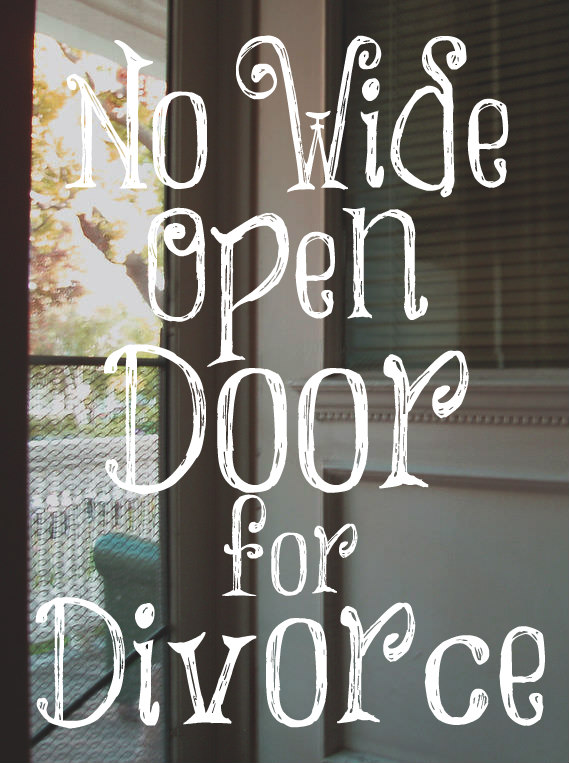 Is divorce ever allowable according to the Scriptures? When the Pharisees asked Jesus if it was lawful for a man to divorce his wife, He answered with great strength.

And he answered and said unto them, Have ye not read, that he which made them at the beginning made them male and female, And said, For this cause shall a man leave father and mother, and shall cleave to his wife: and they twain shall be one flesh? Wherefore they are no more twain, but one flesh. What therefore God hath joined together, let not man put asunder. (Matthew 19:4-6)

But when Jesus seemed so adamant against divorce, the Pharisees pressed him, as people are apt to do.

They say unto him, Why did Moses then command to give a writing of divorcement, and to put her away? (Matthew 19:7)

Jesus’ answer shows how loath He was to make divorce seem a logical solution:

He saith unto them, Moses because of the hardness of your hearts suffered you to put away your wives: but from the beginning it was not so. (Matthew 19:8)

But then His next sentence and another Scripture later on indicate two possible situations allowing divorce:

And I say unto you, Whosoever shall put away his wife, except it be for fornication, and shall marry another, committeth adultery: and whoso marrieth her which is put away doth commit adultery. (Matthew 19:9)

Opening the door a crack, “except for fornication,” is vastly different from throwing it open wide. He didn’t say, “Now, all of you who have been cheated on, please feel free to walk right on through here. There’s no problem. You’ve got your ticket to divorce right in your hand. Y’all come!”

The implication is, “If you insist, it’s permissible for this reason, but don’t feel you must. Forgiving, persevering, loving is better.”

Permanent desertion by a non-Christian partner from a Christian partner is the second possibility. Again, when the Bible brings this up, it presents it not as a free ticket to exit a marriage, but as a very last resort:

If any brother hath a wife that believeth not, and she be pleased to dwell with him, let him not put her away. And the woman which hath an husband that believeth not, and if he be pleased to dwell with her, let her not leave him. For the unbelieving husband is sanctified by the wife, and the unbelieving wife is sanctified by the husband: else were your children unclean; but now are they holy. (1 Corinthians 12b-14)

God is concerned about the welfare of children…Recently we heard a radio talk show psychologist spend a lengthy period of time interviewing only adults in their thirties and beyond whose parents had divorced many years before, when they were children. All of these adults interviewed had either never married or they had married and divorced several times, and the same reason came through repeatedly like a broken record: a whole generation later, these people could not successfully relate to adults in a close, trusting situation because of an unshakable fear that they might be abandoned.

This is not to discourage you if you’re the child of divorced parents; the power of the Holy Spirit can make glorious exceptions to every human tendency! This is a warning to couples considering divorce.

“What if the relationship gets actually violent, or if the marriage is just too miserable to stay intact?” Do we qualify to answer that – we who have never suffered in this way? In counseling others we have hurt when they hurt, but it’s not the same. We don’t want to sound flippant or give easy one-two-three answers to any who are going through very deep marital waters.

There are three needs. Repentance is always in order, and godly counseling from a qualified person who takes the Bible seriously, and loving, praying friends.

Beyond those, consider this suggestion: When a spouse or a child is in actual danger, perhaps the only thing to do is to separate, to stay out of the physical presence of the offender. Separation is not divorce.

This is comparable to the action of the father of the prodigal son. Ther father let him go and put physcial distance between them, but he didn’t disown his son. He didn’t cut him off. He was saying, “I haven’t changed. I’m still on the same old terms, ready to receive you again. When you repent and return, my love for you will have persevered through it all. I’ll be right there, welcoming you back, eagerly and forever.”

There are many marriages today of great triumph, in which one partner has remained patient and faithful and forgiving in spite of every legitimate reason for divorce, until the erring partner repents.

Elizabeth Achtemeier write of her own parents in her book The Committed Marriage,

To give a person witness, I grew up in a home which, for a period, was marked with violent differences, arguments, and the threat of divorce. Through all the turbulence and heartache, my Christian mother refused to agree to the separation because she thought it was wrong for a Christian to do so. Some outside of the family thought she was foolish, but personally I am deeply grateful for her. Contrary to the belief of some psychologists, she prevented psychic damage to her children far beyond what measure of it we suffered in a troubled home. She lived to enjoy a mellowed and loving relationship with Dad in their later years. He himself came to a simple but deep Christian faith, and the last words I heard Mother say to him before her death were, “You really do love me, don’t you?”

If Elizabeth’s mother hadn’t had staying power or that marriage, how would Elizabeth have turned out? Do you think that a generation later a wonderful book would ever have been written to the blessing of many?

Let us tell you about two real couples (their names are, of course, changed) among our friends.

1. Susie has been married to Kevin for fifteen years. She and Kevin are both attractive, prominent Christians, and they have five beauiful children. Many younger believers have looked to them as models, and they are pillars in their church.

Recently, Susie was shocked to discover that Kevin had been playing around with another woman. Susie is divorcing him.

2. Jane became a believer early in her marriage, and she faithfully loved and cared for her husband Carey through insult after insult as he flirted openly before her and had affair after affair. This behavior went on for thirty years!

But Jan had staying power: Her love simply outlasted Carey’s rebellion. And when at last he was broken and repentant and accepted Christ into his heart, he couldn’t appreciate and love her enough.

Look at these two marriages from the perspective of ten years from now. (Remember, keep your eyes ahead, and always live today in the light of tomorrow.)

1. Susie and Kevin will have bitter memories locked inside their hearts, and damaged children, and friends who never understood and so backed away. There could be awkward children’s weddings…They themselves may also have new marriages and the confusion of relationships between ex-spouses and current ones, “his” children and “hers,” and too many grandparents, uncles, and aunts, mostly also hurting and confused. They’ll have rethought whether they could remain in their church, and probably one will have left, feeling abandoned and resentful. Both will feel uncertain about their “ministries” (they’ve been Bible teachers) for the rest of their lives, in the church’s confusion over whether they still qualify for leadership and service.

2. Jane and Carey will be in their “golden years,” considered by their church as models – a lovely older couple who had earlier struggles but finally “made it.” And Carey, in great gratitude, will probably treat Jane as he does today – like the queen that she truly is.

Listen: In your marriage, as in every marriage, there will be, along the way, those little – enormous! – moments of decision when you take a stand, one way or the other:

“I will not forgive.”

5 thoughts on “No Wide Open Door For Divorce”