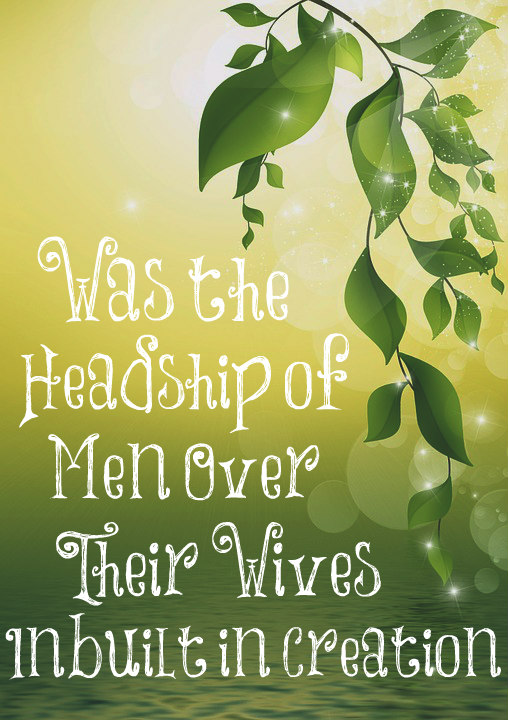 Recently, I read “A Severe Mercy” by Sheldon Vanuken. Sheldon was a pagan and married a pagan wife. Their goal was to be deeply in love always and do anything it took to stay this way including not having children. They believed life was about love and beauty, so they went about living their lives seeking this.

They met some Christians who they became very close to and realized that these Christians were the happiest and kindest people they have ever met. They eventually became strong believers, yet Sheldon’s wife, Davy, died in her thirties from a strange illness that ate away her liver. Here is one insight he had about their marriage after her death.

“One insight from the past, which I might have closed my mind to but for Christianity, was not quite so shocking as it would have been if Davy in that last year or so had not seemed increasingly to accept St. Paul’s dictum on the relationship of husband and wife: that the man is head of the wife as Christ is head of the Church. Although we should fiercely have denied it, except perhaps for Davy in that last year, I saw that I had exercised a sort of headship – in the sense of the initiatory or leadership role – that was accepted, even desired, by Davy without either of us being aware of it. It had been loving and gentle, all decisions were discussed, there was never a hint of command, and yet, despite mutual tenderness and deference, it was, I now saw, there: that veiled and loving headship.

“We had eschewed husbandly authority from the first, Davy was combative and intelligent, we believed everything a modern feminist would have urged: yet something of headship had all along been there. Having known one woman deeply, having myself made every effort to see with a woman’s eyes, I could now believe that my subtle headship or Davy’s acceptance of it was merely conditioning. Now I wrote to her about it, wondering without decision whether, despite all feminist denial, such a relationship were not inbuilt in the creation and effectively denied – which, after all, we, loving deeply, had not been able to do – only at heavy cost of love.”

Satan convinced Eve that authority to God was evil, and he went to her instead of to Adam for a good reason. This is how he was able to deceive her and have her eat the forbidden fruit. Satan is actively convincing women that submission to their husbands is evil, yet many willingly submit to his wicked agenda of feminism and the destruction of the marriage and family. He fights against everything that God tells us is good and right.

Yes, the headship of husbands over their wives was inbuilt from Creation since the purpose for God creating Eve was to be a help meet to her husband. This is God-ordained and it is good. For those who want to argue that being a helpmeet didn’t mean that Adam was in authority, oh yes, it did. In 1 Timothy 2:13, was are told that one of the reasons that women are not to usurp authority over men nor teach them was because Adam was created first. God made him first and had Adam name all of the animals.

But God saw that it wasn’t good for him to be alone so he made a help meet for him out of his rib. Adam was in authority over her, and this is why women are to “learn in silence with all subjection” (1 Timothy 2:11) in the churches. It hearkens all the way back to Creation and has nothing to do with cultural norms. Even Jesus submitted to God the Father. Authority is good, women! Don’t allow anyone to tell you anything differently. Without leaders and people in authority, there is chaos.

12 thoughts on “Was the Headship of Men Over Their Wives Inbuilt in Creation?”