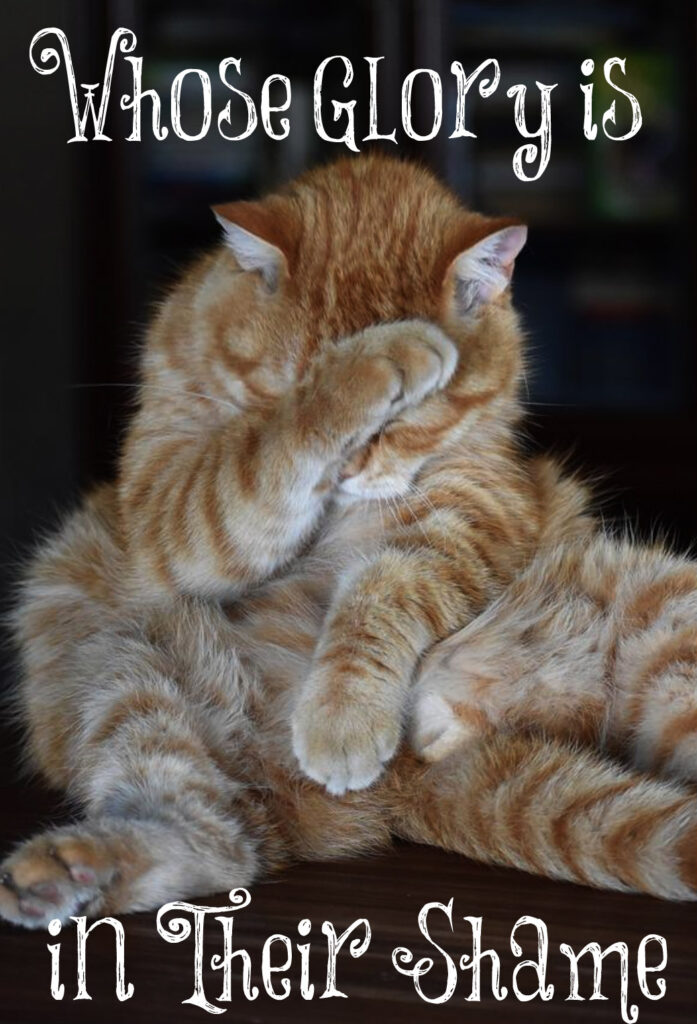 “For many walk, of whom I have told you often, and now tell you even weeping, that they are enemies of the cross of Christ: Whose end is destruction, whose God is their belly, and whose glory is in their shame, who mind earthly things” (Philippians 3:18,19).

There is a lot of talk about shaming others these days. It’s difficult to teach any biblical truths without some accusing me of shaming others who disobey these biblical truths. When I read this verse in my morning Bible reading time, the phrase “whose glory is in their shame” stuck out to me. I decided to look in the commentaries of old to find out what this phrase meant even though I had a good idea.

“That is, they glory in things of which they ought to be ashamed. They indulge in modes of living which ought to cover them with confusion.”

“Yea, they boast of those things whereof they ought to be ashamed, thinking it reputation they have got many to imitate thein, John 5:44 12:43 they are puffed up with that which should rather make them to blush, 1 Corinthians 5:2, as being attended at last with confusion.”

“…and whose glory is in their shame; in their evil practices committed in secret, of which it was a shame to speak; in their hidden things of dishonesty, crafty walking, and deceitful handling of the word of God, which were vile and scandalous, 2 Corinthians 4:2; in corrupting the Gospel, and the churches of Christ, with their false doctrine; in observing and urging the ceremonies of the law, which were dead, and ought to be buried.” (This is from Gill’s Exposition. His has become my favorite!)

Many try to stop me from teaching biblical truths because they feel shamed. Rather than being convicted and challenged by Truth, they want to silence those who speak and teach truth. They relish in their shame. They want their shame to be celebrated and normalized. They want others to congratulate them in their shame and do likewise. They love their shame! They can no longer understand nor accept truth. Their exceptions, in their minds, completely negate truth. Have nothing to do with them, women! Be seekers and lovers of the Truth. Obey the truth. Have nothing to do with things that cause shame.

The Lord knoweth the days of the upright: and their inheritance shall be for ever. They shall not be ashamed in the evil time: and in the days of famine they shall be satisfied.
Psalm 37:18,19