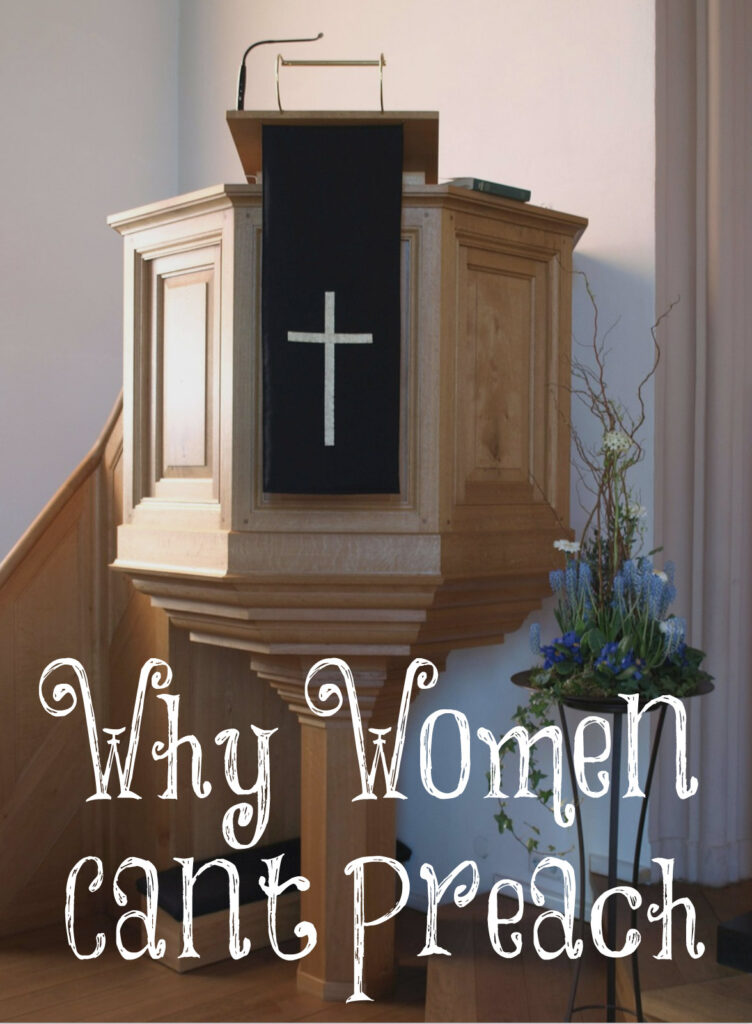 The second reason given is that Eve was deceived. Does this mean that all women are more easily deceived? I absolutely believe so. We were created to be more emotional and sensitive to be home raising our children. Women are also more easily offended than men, if you haven’t noticed. They are easily led by their emotions, feelings, and hormones until they learn to take their thoughts captive to the obedience of Christ.

Let’s look at a commentary of old (Gill’s Exposition, my favorite) has to say about this.

“Now inasmuch as the serpent did not attack Adam, he being the stronger and more knowing person, and less capable of being managed and seduced; but made his attempt on Eve, in which he succeeded; and since not Adam, but Eve, was deceived, it appears that the man is the more proper person to bear rule and authority, as in civil and domestic, so in ecclesiastic affairs; and it is right for the woman to learn, and the man to teach: and seeing that Eve was the cause of transgression to Adam, and of punishment to him and his posterity, the subjection of the woman to the man was confirmed afresh: and she was brought into a more depressed state of dependence on him, and subjection to him; see Genesis 3:16. The Ethiopic version renders the text, ‘Adam hath not deceived, the woman hath deceived and prevaricated.'”

Here’s another verse that confirms this to be true: “Likewise, ye husbands, dwell with them according to knowledge, giving honour unto the wife, as unto the weaker vessel, and as being heirs together of the grace of life; that your prayers be not hindered” (1 Peter 3:7). We’re the weaker vessel. What does this mean? (It’s silly that I have to even ask this question, but in this day and age, it will be asked.)

Ellicot’s Commentarty: “The thing which the husband is specially to understand and take into account is that he is dealing with a thing less strong than himself. The whole of chivalry is in these words, and St. Peter (next after Christ) may be considered the founder of it. Weakness itself, by being weakness, has a claim upon the strong man’s deference and self-submission. The weakness here ascribed to the female sex is primarily that of the body, as we shall see when we consider the word ‘vessel,’ though it may, perhaps, indicate frailty in other respects as well.”

Most of the commentaries stated that the woman is weaker in mind than the man also. The reason I agree with this is that women are more easily led by their emotions and feelings than men, so this is definitely a weakness in mind. God created us male and female. We both have different strengths and weaknesses. It’s wise to acknowledge our weaknesses, so we won’t be easily deceived or tempted by false teachers and false doctrine.

God our Creator has good reasons for ALL of His commands. He wants women to “learn in silence with all subjection,” and let their husbands lead in the home and the elders in the churches. It’s for our good, women, not for evil. Trust God and His perfect ways.

5 thoughts on “Why Women Can’t Preach”