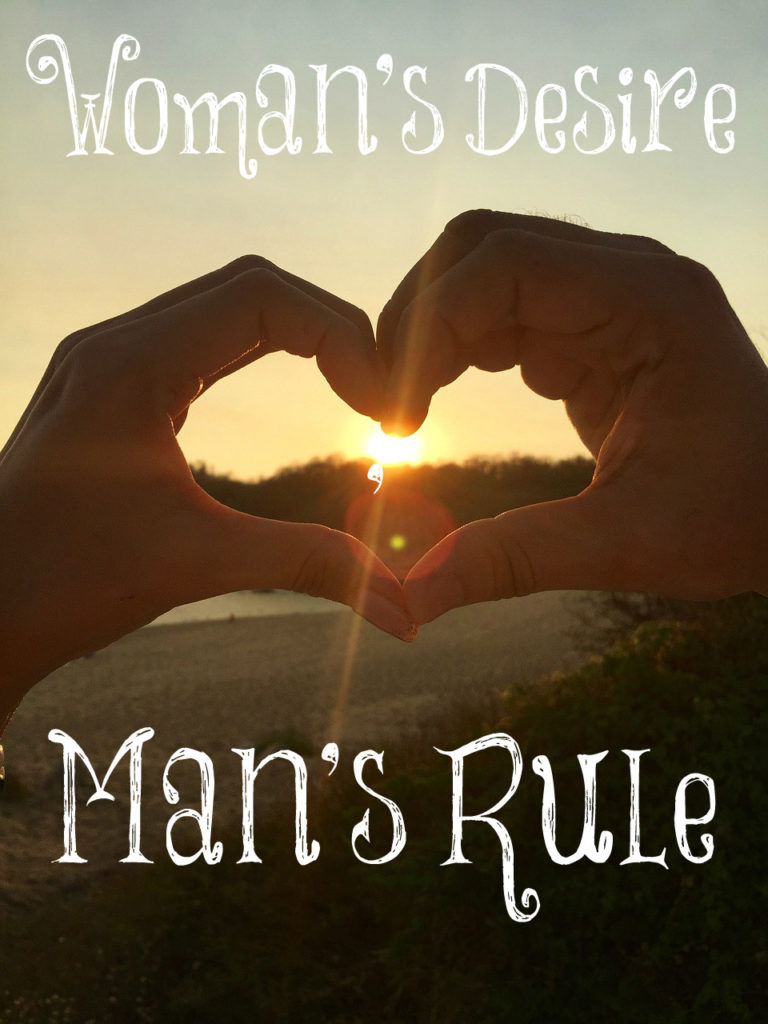 Your desire shall be to your husband, and he shall rule over you.
Genesis 3:16

Men can easily rule over women because they are much bigger and stronger than women and they have throughout the centuries. This desire by men to dominate women is due to the fall and sin entering the world. Because of this, feminism blames all of the evils of culture on men even though we live in a culture that has given women more rights than any other culture that has ever existed.

We now have the term “marital rape” which was never used up until recently. On most college campuses, men are held in disdain.“Patriarchal” is evil in feminists’ mind and forget about using the word “submission” since they falsely believe this always leads to abuse. In feminists’ pursuit of wanting to take control away from men, they have decided they want to become men, yet they hate men. Go figure.

“He shall rule over thee, is but God’s command, Wives, be subject to your own husbands. If man had not sinned, he would always have ruled with wisdom and love; if the woman had not sinned, she would always have obeyed with humility and meekness. Adam laid the blame on his wife; but though it was her fault to persuade him to eat the forbidden fruit, it was his fault to hearken to her” (Matthew Henry’s Commentary).

All women’s natural inclination is to wrest control from the men who are stronger than them. This is why Eve ate the forbidden fruit. She wanted to be in control and rebelled against her husband and God. This is why feminism began and unfortunately, we have all inherited this trait. We must be aware of it and fight against it. Don’t allow your controlling nature to control you or others since no one enjoys being controlled, especially your husband.

“This is evidently a piece of that retributive justice which meets us constantly in the administration of God. The woman had taken the lead in the transgression. In the fallen state, she is to be subject to the will of her husband. ‘Desire’ does not refer to sexual desire in particular (Genesis 4:7). It means, in general, ‘turn,’ determination of the will. ‘The determination of thy will shall be yielded to thy husband, and, accordingly, he shall rule over thee.’ The second clause, according to the parallel structure of the sentence, is a climax or emphatic reiteration of the first, and therefore serves to determine its meaning. Under fallen man, woman has been more or less a slave. In fact, under the rule of selfishness, the weaker must serve the stronger. Only a spiritual resurrection will restore her to her true place, as the help-meet for man” (Barnes’ Notes).

Christianity is what has given value and worth to women, not feminism. You can see in many countries the ill-treatment of women by men but Jesus came and spoke to women who were forbidden to talk with and told them to “go and sin no more.” He healed sick women and saved an adulterous woman from being stoned. He was born of a woman and made sure his mother was well cared for after His death. He was crucified and rose again for women AND men so their sins would be paid in full and all who believe can have eternal life.

The term “help meet” is a valued position that God created from the beginning of time. All Christian marriages should be defined by a husband and his help meet, not as a husband and his slave as many want to twist and subvert the word submission. A wife’s willful submission to her husband brings order and beauty to a marriage as was God’s original intention for marriage.

“… he shall rule over thee, with less kindness and gentleness, with more rigor and strictness: it looks as if before the transgression there was a greater equality between the man and the woman, or man did not exercise the authority over the woman he afterwards did, or the subjection of her to him was more pleasant and agreeable than now it would be; and this was her chastisement, because she did not ask advice of her husband about eating the fruit, but did it of herself, without his will and consent, and tempted him to do the same” (Gill’s Commentary).

Even before the Fall, Eve was created to be Adam’s help meet. There was nothing written about her being in submission to him at this time but we must remember that there was no sin, therefore, there was no arguing, wanting her own way, angry outbursts, control issues, manipulation tactics, or any of the things that tear apart marriages today. Adam didn’t need to be “over” Eve since she was most likely by his side helping him with whatever he needed help with and she did it without complaint. He was her leader. But once sin entered the world, so did all of these ugly, selfish traits and God knew that there needed to be one “ruler” and the ruler He chose was the one that wasn’t deceived.

“The determination of thy will shall be yielded to thy husband…Among the Hebrews the condition of the female sex was one of distinct subordination, though not of oppression, and certainly not of slavery, as it too often has been in heathen and Mohammedan countries. Christianity, while placing woman on the same platform with man as regards the blessings of the gospel (Galatians 3:28), explicitly inculcates her subordination to the man in the relationship of marriage” (Ephesians 5:22; Colossians 3:18; 1 Peter 3:1) (Pulpit Commentary).

Some of the old commentaries use the word “subordination” but I don’t like it nor use it since God’s Word never uses it. God uses the word “submission” or “subjection” not subordination as if women were of lesser value than men. Subordination means “the state of being inferior to another” (although women are clearly inferior to men in strength, might, and determination since it is men who have built and invented almost everything!). Submission means “the act of submitting; the act of yielding to power or authority.” It’s a voluntary act that a wife does towards her husband in living in submission to him.

It is not true believers in Christ Jesus who abuse and oppress their wives and consider them as slaves as many unbelievers have throughout the centuries including many countries today. Godly men see the beauty and value in women and know that Christ died for them just as He died for them. It is the sin of our culture (pornography, sexual immorality, and immodesty) that has made women into objects, not Christianity.

“Created for the man, the woman was made subordinate to him from the very first; but the supremacy of the man was not intended to become a despotic rule, crushing the woman into a slave, which has been the rule in ancient and modern Heathenism, and even in Mahometanism also – a rule which was first softened by the sin-destroying grace of the Gospel, and changed into a form more in harmony with the original relation, viz., that of a rule on the one hand, and subordination on the other, which have their roots in mutual esteem and love.” (Keil and Delitsche Biblical Commentary).

God’s perfect plan for men and women is clearly defined in His Word. The man is the head and the woman is in submission, not subordination, to his leadership in marriage. No, it will never be a perfect union since no man or woman is perfect but with Christ’s power flowing through them, they can have a good, strong marriage until death do they part.