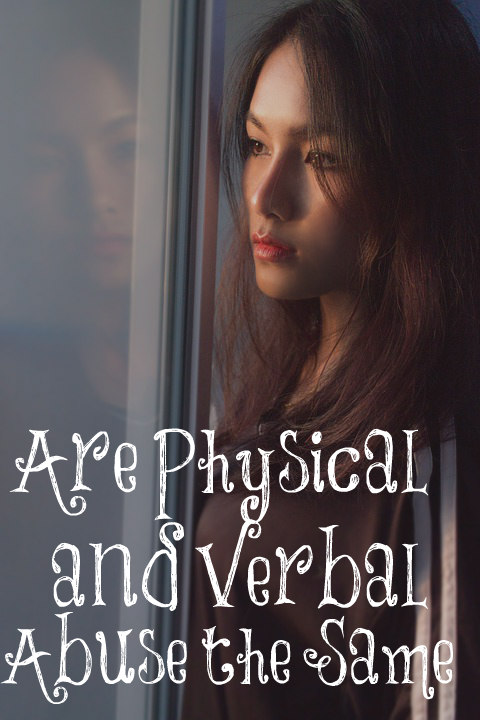 Here is an excerpt from an excellent book written in 1990 entitled Liberated Through Submission: God’s Design for Freedom in All Relationships By P.B. Wilson.

A person asked, “My husband has never hit me, but he is verbally abusive. Don’t you think it’s the same thing?

Answer: “I have been present when husbands and wives verbally abuse one another, and some of the sharpest knives could not compete with the damage of the tongue. However, I do believe verbal and physical abuse are different. Bodily harm endangers your life; verbal abuse is damaging to your emotions and self-image.

So many times a person who is verbally abusive comes from a contemptuous background. Such destructive behavior requires prayerful, serious attention and help. In this case, you may be the help your husband needs. When a person sends out hate and it is met with love, there’s no contest. Love is the strongest force on earth:

When we go against our emotions and will and submit to God’s Word, we can trust that God will intervene with a verbally abusive person in His own time. He will make things right. What is our guarantee? Three little words: “Love never fails.”

It is impossible for God’s love to fail. Even if the immediate situation defies that Scripture. God’s promise is that His love for us will never fail. And it always accomplishes that which it set out to do. It is, however, one of the hardest attributes to exercise. God’s unconditional love boggles the human mind.

A friend of mine was in a verbally abusive situation for many years. She continued to pray for her husband and to treat him with respect, but also learned to “disconnect” herself from the unkind words which often assailed her. She did this by focusing her attention on other important matters: her children, her friends, and her care of the home. Although wounded and rejected by her spouse, she developed an inner conviction that his words were untrue and unfair and she should not take them to heart. This enabled her to receive God’s love and acceptance through the kindness of others.

My friend honestly believed that if she gave the situation to God and trusted Him, he would eventually rectify it. She spent hours in the Word and in prayer. Vital to her survival was a small circle of understanding and encouraging friends who refused to allow her to sink into self-incrimination and depression. Her friends reminded her of “who she was,” and encouraged her to be thankful for the positive things in her life.

Finally, a dramatic transformation occurred. After 14 years of cynical and bitter words, the husband was brought face-to-face with his failure. His criticism and insults were silenced within a matter of days. It was my friend’s careful and determined obedience to God’s voice that finally brought about the change.

God’s Word has called us to submit to Him in many areas that are offensive to our mind and flesh. What person in his right mind would want to love his enemies or pray for those who despitefully use him? Yet God calls His children to do just that. Verbal abuse is nothing new to God. His Word equips the believer for handling verbal assaults, with such instructions as, “Return blessing for insults,” and “A soft answer turns away wrath.”

I’m not saying that responding in this way is easy. I’m sure this is one of those instances about which Jesus promises, “They that suffer with me shall reign with me.”

To help you get through the pain, I recommend that you surround yourself with a strong group of praying Christians, and that you fortify yourself with God’s Word. Learn to see yourself as God sees you. Be sure and read Psalm 139! Once you understand who you are in Him, no one can tear you down.

And look at it this way: Missionaries depart every day for heathen nations with a mission to take these territories for Christ. You have been given the blessed privilege of being a missionary, and you don’t even have to get a passport, pack or leave home!

Likewise, ye wives, be in subjection to your own husbands; that, if any obey not the word, they also may without the word be won by the conversation of the wives.
1 Peter 3:1

11 thoughts on “Are Physical and Verbal Abuse the Same?”