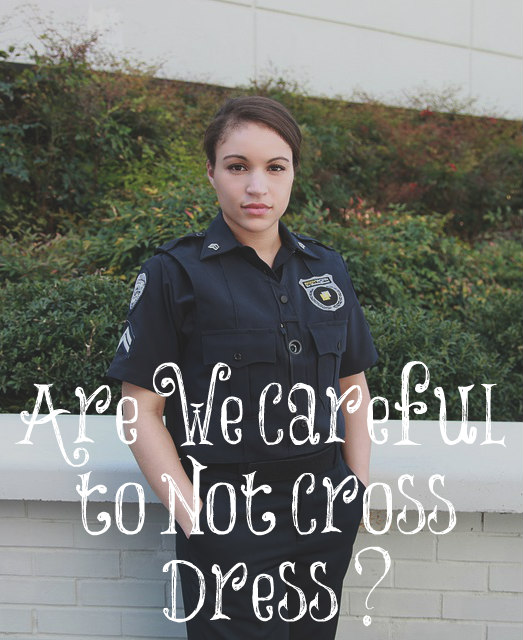 The problem is, for decades we have been taught that there is nothing shameful about a woman dressing like and acting like a man. This is so much the case that it is really difficult to conceive of what would be considered cross-dressing for a woman in our culture, including modern conservative Christian culture. Which of the following would cause a modern woman to be shamed for being a cross dresser?

Contrast this with a man who does any of the below.  Is he seen as a cross dresser?

We have in our culture two kinds of clothing/styles:

From a practical perspective, it is all but impossible for a woman to cross dress in our culture. We have great difficulty even conceiving of the idea. Cross dressing in our culture is something that almost exclusively pertains to men, because a woman cross dressing is simply normal. From this perspective, we were already half way to accepting cross dressing as far back as the 1980s. We’ve lived for decades rejecting the idea that something God detests is even possible. Even worse, we have denied that our perspective on the issue has changed. We forgot it, and then we forgot that we forgot it.

Let’s begin today to dress and act like godly women who love being feminine with meek and quiet spirits.

The woman shall not wear that which pertaineth unto a man, neither shall a man put on a woman’s garment: for all that do so are abomination unto the LORD thy God.
Deuteronomy 22:5

She maketh herself coverings of tapestry; her clothing is silk and purple.
Proverbs 31:22

40 thoughts on “Are We Careful to Not Cross Dress?”