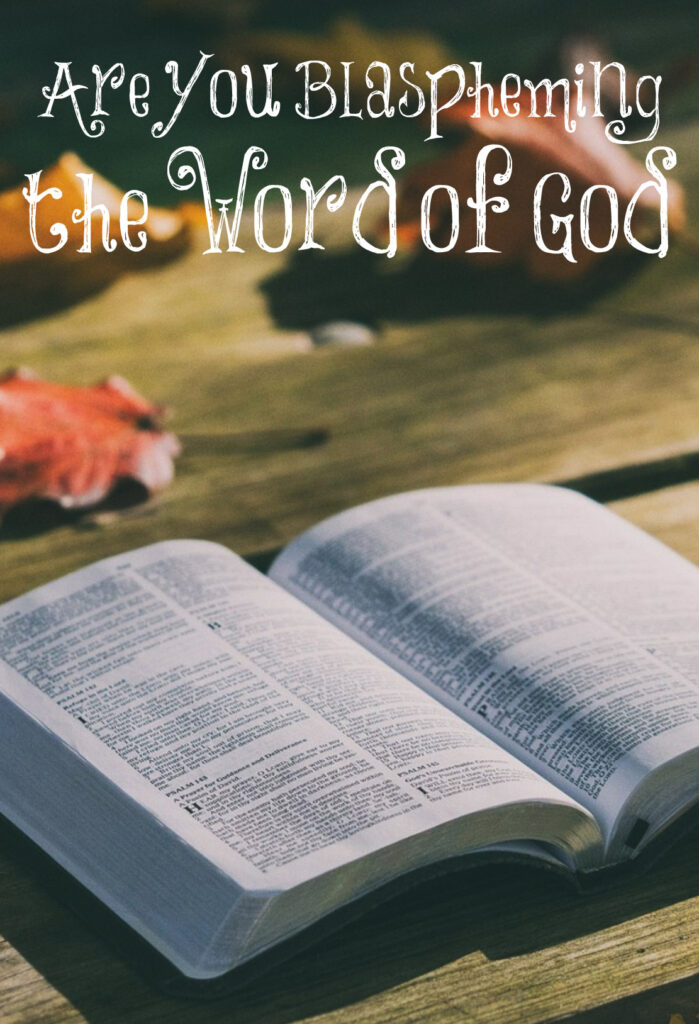 Did you know that you “blaspheme the Word of God” if you’re not sober, you don’t love and obey your husband, you don’t love your children, you aren’t discreet, chaste, good, and keepers at home? God tells us this in Titus 2:4,5. This is why I am diligent in teaching these things.

What does it mean to blaspheme the Word of God? Let’s look in the commentaries of old.

“There was, of course, the fear that wives, carried away by religious fervour, might neglect the plainer every-day duties for the seemingly loftier and more self-denying occupations included under the head of religious works. Such failure in every-day tasks would, of course, be bitterly charged on the religion of Christ, and the gospel would run the danger of being evil-spoken of, even in other than purely Pagan circles. But the reference extends over a broader area than that occupied by Christian mistresses of households. All, of every rank and age, who think they love the Lord Jesus should remember that the ‘enemy’ is ever watching their words and works; never should they who wear the colours of the great King forget the charge of the King’s son, ‘Let your light so shine before men that they may see your good works, and glorify your Father which is in heaven.'” (Ellicot’s Commentary)

“Our Lord, on the other hand, exhorts that Christians, by their good works, should lead men to glorify their Father which is in heaven. The passage before us shows how much the honor of Christianity is bound up with the faithful discharge by Christians of the simple domestic duties of life. In truth, the family is the chief seat, and often the main test, of Christian virtue, as it is the distinctive feature of humanity as ordained by God.” (Pulpit Commentary)

“That the word of God be not blasphemed – That the gospel may not be injuriously spoken of (Notes, Matthew 9:3), on account of the inconsistent lives of those who profess to be influenced by it. The idea is, that religion ought to produce the virtues here spoken of, and that when it does not, it will be reproached as being of no value.” (Barnes’ Notes on the Bible)

“Blasphemed—’evil spoken of.’ That no reproach may be cast on the Gospel, through the inconsistencies of its professors (Titus 2:8, 10; Romans 2:24; 1Timothy 5:14; 6:1). ‘Unless we are virtuous, blasphemy will come through us to the faith.'” (Jamieson-Fausset-Brown Commentary)

That they may teach the young women to be sober, to love their husbands, to love their children, To be discreet, chaste, keepers at home, good, obedient to their own husbands, that the word of God be not blasphemed.
Titus 2:4,5