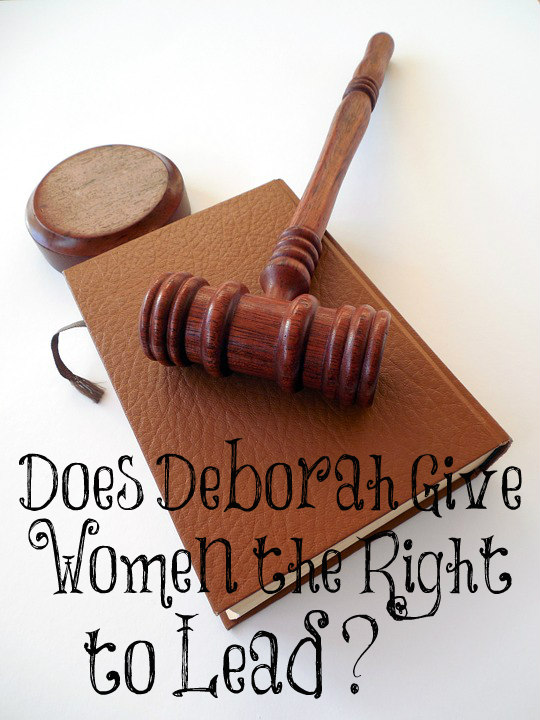 Whenever I teach that God’s will is for men to be the ones in authority and the leaders, women will undoubtedly bring up Deborah who was a judge in Israel. Does she give women the right to lead? No. All throughout God’s Word with the exception of Deborah, men were the leaders and the ones in authority. God created a man first. He created the woman to be his help meet. From the beginning, God established his authority structure.

He made all of the great Partriarchs and the Minor and Major Prophets men. The Priests and Kings were all men. All of the Judges were men except for Deborah. The forerunner of Christ was a man. Christ was a man. He choose 12 men to be His disciples who became Apostles including Paul. He commanded that men be the elders and deacons in the churches, and the husband to be the head of the wife. Men wrote all of the books of the Bible.

His will is for men to lead. He’s made this very clear. One exception doesn’t negate His will. In fact, Isaiah wrote this: “As for my people, children are their oppressors, and women rule over them. O my people, they which lead thee cause thee to err, and destroy the way of thy paths” (Isaiah 3:12).

We are told two reasons why women can’t teach nor be in authority in the churches, and these reasons go back to creation. God made the man first and the woman was deceived. “Women are to learn in silence with all subjection” (1 Timothy 2:11). God is absolutely a patriarchal God, and His will is for men to be in leadership positions. Again, one example in the Bible doesn’t negate the rest of God’s Word and will.

Deborah judged Israel in a time of great wickedness. “And the children of Israel again did evil in the sight of the Lord” (Judges 4:1). She was referred to as “the mother of Israel.” When going to war, she commanded Barak to take men and go to war. He was a wimp and would only go if she would go, even though God was clear that only men who were 20 years old and older would go to war (Numbers 1:3,4).

It seems that the men in this wicked time were not masculine or up for leading. This is what happens when nations grow wicked. The men become effeminate as we can see in our nation. In times of great wickedness, women have left their feminine role and then men left their masculine role. This leads to chaos.

Instead of reaching for the exceptions in God’s Word, let’s look at His direct commands and will for our lives. Let’s take the Bible as a whole and then we will be able to clearly determine what God’s will is for us, and it’s perfect. Also, God, our Creator, does call women the “weaker vessel.” True godly women have no desire to be in leadership positions or the ones in authority, since they understand that God didn’t create them for these masculine roles. Most women in authority positions have masculine traits, and it’s not attractive.

18 thoughts on “Does Deborah Give Women the Right to Lead?”