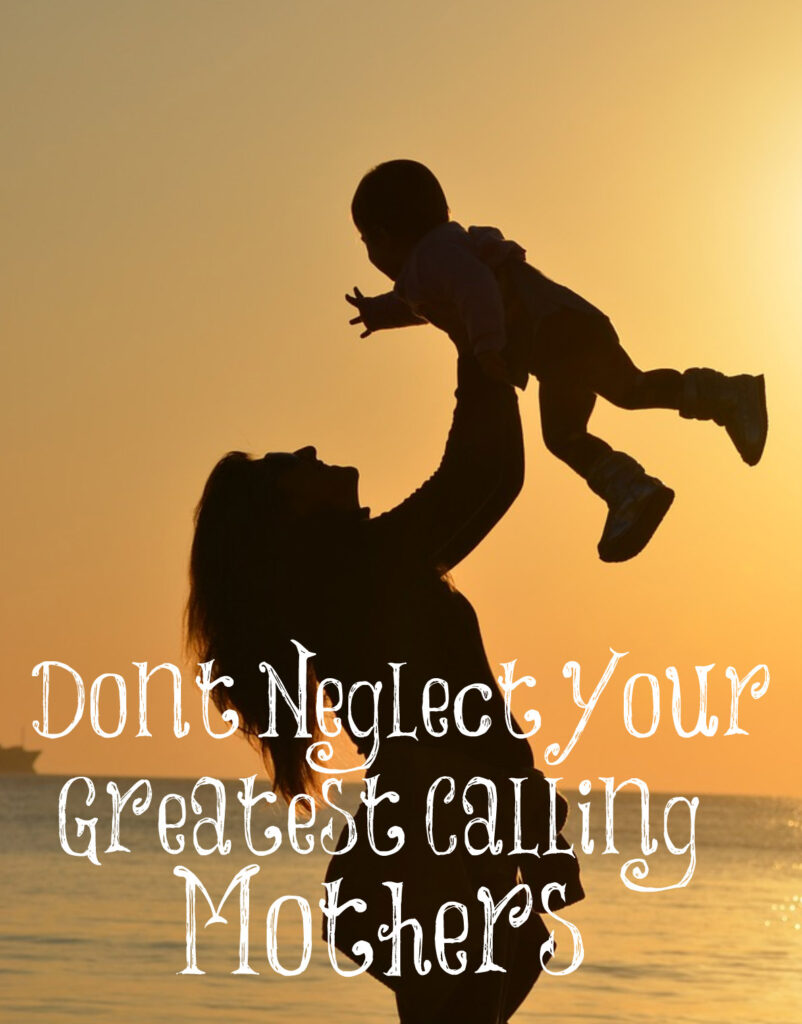 “Mama, you weren’t entrusted with this entire nation, you were entrusted with your babies and your husbands. Focus on what’s in front of you. There is great work to do within the walls of our homes. Don’t let the state of our nation distract you from that. There is nothing Satan would love more than for a generation of moms to fixate so much on what’s going on outside the walls of their homes that they neglect their greatest callings within them.” (Paige Hilken)

I posted this on Facebook the other day. Undoubtedly, I received comments from women who disagreed such as this one from Madeleine R.: “And what if God has given you a talent to take on the world and your husband and your children and your church back you? Some women did big things in the Bible, outside of the home. Requiring all of us to ignore our talents and ignore that is unbiblical. What is your biblical basis for limiting women by saying, ‘Mamas, you were not entrusted with this entire nation. You were entrusted with your husbands and babies?'”

For one thing, God didn’t give talents to women to “take on the world” whatever that means. The greatest thing women can do to influence the world for good is to raise godly offspring, since they are the future generations. God created men to be the leaders in society. All throughout the Bible, it was men who were the leaders, except for Deborah, which was a rare exception.

What “big things” did women do in the Bible outside of their homes? Here are some in no particular order. Eve was considered the “mother of all living” (Genesis 3:20). Abigail was married to a wicked man and was used by God to prevent a great tragedy. Queen Esther risked her own life to go to the King to spare her people, the Jews. Hannah pleaded with the Lord to give her a baby. The Lord blessed her womb, and she bore Samuel whom she dedicated to the Lord. She went on to bear five more children. Rahab was a prostitute who helped hide servants of the Lord from danger.

Ruth chose to stay with her mother-in-law, picked scraps of food in order to survive, and eventually married Boaz. Rachel was a patriarch’s wife and bore two children, one being Joseph. Rebekah married Isaac and bore two sons, Jacob and Esau. Sarah was Abraham’s wife who is known for her obedience to her husband and was blessed with a baby (Isaac) when she was 90 years old. Mary bore Jesus Christ and raised him.

Hmm, it looks like these women had no desire to use their talents to take on the world. They used their talents for their families; to care for their families and others. Most of them had lives that revolved around being a wife and mother. Remember, in most of civilization, there was no birth control pills they could pop to prevent babies. When they got married, most of them bore and raised children. If they couldn’t get pregnant, they mourned deeply. There were NO women in the Bible who left their homes every day, left their children to be cared for by strangers, and worked for a boss.

Then we go to commands that God gives to women. In Titus 2:4, God commands older women to teach younger women to be “keepers at home,” so they don’t blaspheme His Word. In 1 Timothy 5:14, He commands young women to marry, bear children, and guide the home, so they give no occasion for the enemy to speak reproachfully. God wants young women’s work, talents, energy, and time to revolve around their husbands, children, and home.

If your husband, children, and church back you to go into the workforce to take on the world, you may be gaining the world but losing your own family. This is not God’s will for women. God’s Word trumps every other word. He’s our Creator. He created us to be wives, mothers, and children. His desire is the family. The first command He gave to Adam and Eve after they married was to be fruitful and multiply. He puts the lonely in families. We weren’t meant to be alone. After He created Adam, He said it wasn’t good for man to be alone, so He created a wife for him. This is His plan for us, and it is good.