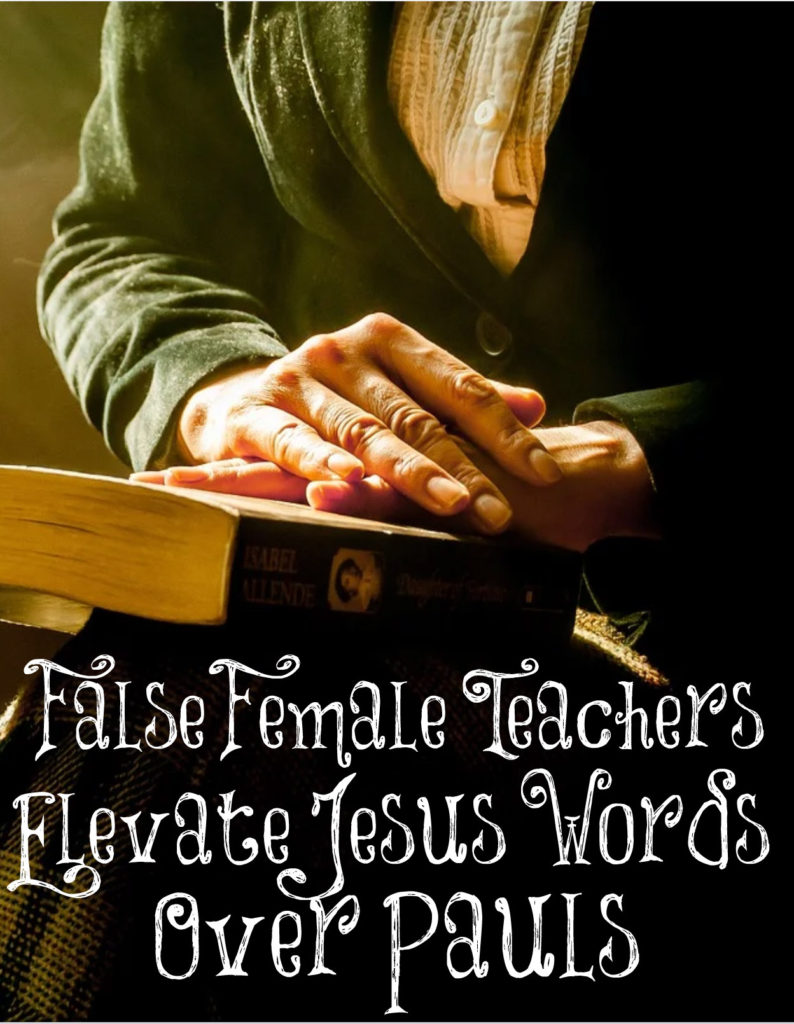 False female “Bible” teachers elevate Jesus’ words over the Apostle Paul’s. In fact, they prefer to ignore Paul’s words altogether, but if they do try to tackle them, they will find a bunch of examples in God’s Word that completely negate Paul’s words. The reason they do this is because Paul is the one who wrote most of the commands concerning women in the churches and in the homes.

In 2 Peter 3:16, Peter wrote about Paul’s writings and said this about them: “As also in all his epistles, speaking in them of these things; in which are some things hard to be understood, which they that are unlearned and unstable wrest, as they do also the other scriptures, unto their own destruction.” Wrest means to distort; to turn from truth; to pervert. This is what many female “Bible” teachers do. We are warned about false teachers in almost every book of the New Testament for a reason. There are many!

On this past Mother’s Day, there were many churches who had female preachers preach. They use the excuse that they are under the male leadership of the church, and it’s Mother’s Day. There is never any excuse to disobey God’s clear command regarding this issue. Women are forbidden from teaching men in the churches. Period. Sadly, it’s now hard to find a church that doesn’t allow this and only has men in the leadership positions.

God doesn’t command that women learn in silence in the churches with all submission and that they are to submit to their husband’s leadership because of value. It has nothing to do with our value and worth. It has to do with order. God is a God of order, and He gave us the reasons for men to be in leadership positions. Adam was created first, and Eve was deceived. God created men to be the leaders in the churches and homes, and the women to follow. He is good, and these commands are good.

False teachers who teach things contrary to this are in essence teaching that God is not good, and His ways are not good. They need to manipulate these verses and find all the examples in the Bible to negate them, since they falsely believe that that are wiser than God. God must have not known what He was talking about according to them. “Women are now new and improved!” No, women are the same sinful, fallen creatures that they’ve always been. God created us. He knows our weaknesses, and what is best for us. Godly women trust and obey Him.

Stop learning from most female Bible teachers who preach in church, water down and distort Paul’s teachings, and pridefully believe they know better than God what is best for women. This verse defines them perfectly: “While they promise them liberty, they themselves are the servants of corruption: for of whom a man is overcome, of the same is he brought in bondage” (2 Peter 2:19). What these false female preachers promise to women as freedom has taken them into bondage instead by believing fables rather than Truth.

And through covetousness shall they with feigned words make merchandise of you: whose judgment now of a long time lingereth not, and their damnation slumbereth not.
2 Peter 2:3