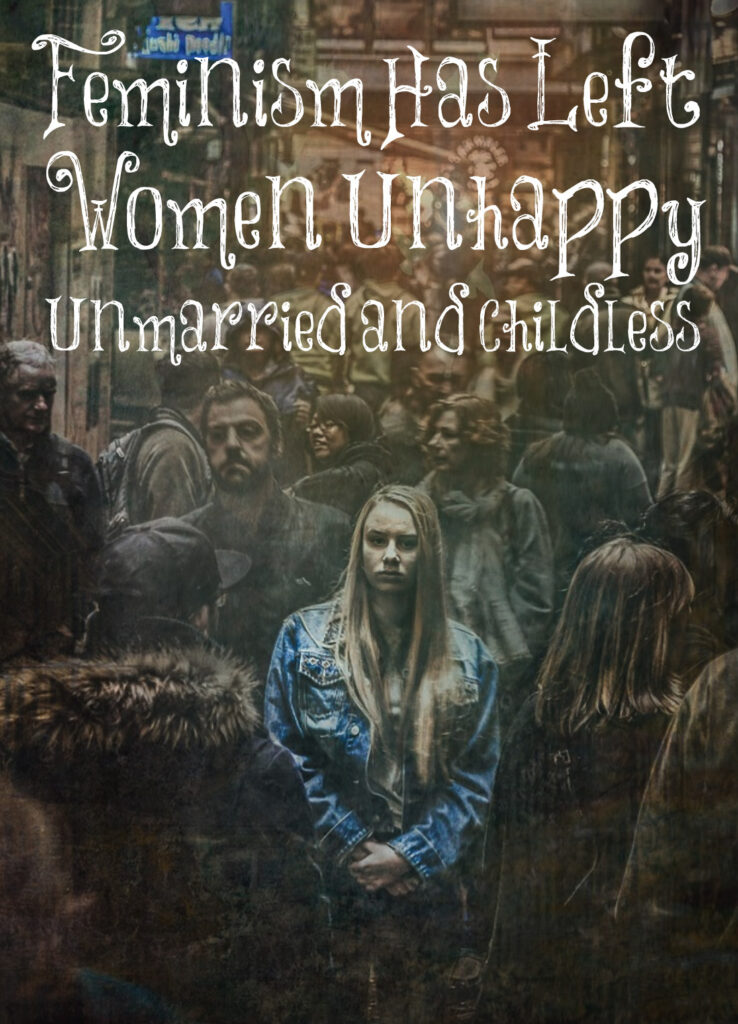 God’s will for women is to marry, bear children, and guide the home (1 Timothy 5:14). This is God’s perfect path for us, yet feminism has steered women in the opposite direction so that they end up unhappy, unmarried, and childless. This is Satan’s goal, not God’s. God created us for the home and for children. He didn’t created us for the workforce and the stress that comes from this. He created men for this since they have ten times the testosterone as women, but women in their fight for “liberation” lost what was most valuable in their lives.

The Daily Wire had an article titled Feminism is Leaving a Wake of Unhappy, Unmarried, and Childless Women in Its Path. Instead of taking the old paths that God has ordained for us, they have taken the wide path that leads to destruction. Here are a few quotes from the article.

“So back to the original claim: the so-called sexual liberation of women is indeed screwing women, and not in a good way.

“Why would a man rush to settle down and marry someone if he can not only have sex with ‘liberated’ women without a ring, but even cohabitate with them, too? Moreover, the less chaste a woman is, the less preferable she will likely be to a man. Not to mention a woman’s increasing age and creeping near infertility as another massively undesirable trait.

“If women demanded more from men, did not sleep around in the name of feminism, men would settle into marriage at an earlier age.

“But, nonetheless, these simple truths will be rejected by feminists everywhere, clinging hard to their sad, lonely lives in exchange for empty Feminism, as they accuse any dissenter of being a misogynist.”

The sexual liberation movement wasn’t liberation at all. It was bondage for women. They give sex away for free without the commitment of marriage. They cohabitate without commitment for life. Their children, if they have any, have no father so they’re single mothers in the workforce. This isn’t liberation at all. It’s bondage and exactly what Satan gives. He loves people’s lives to be miserable and unhappy. Christ came to set us free and give us life abundant. Choose you this day whom you will serve, women. God or Satan?