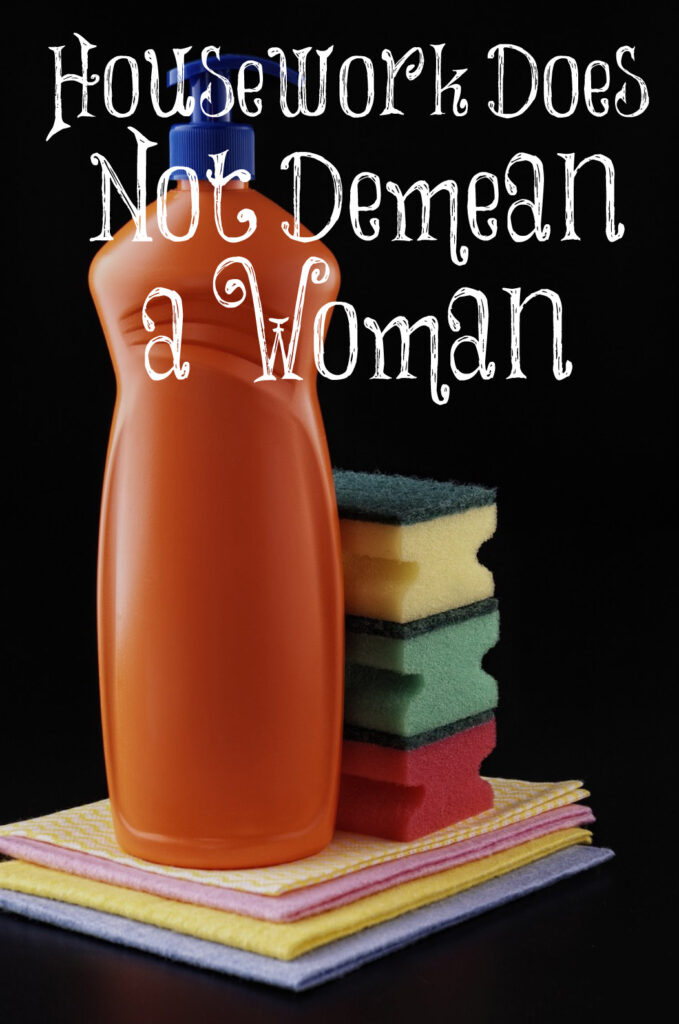 Housework isn’t “below” a woman or “demeaning” to her. Housework doesn’t “squander her gifts.”

We often hear such language today, even from professing evangelicals who say they believe texts like Proverbs 31 and 1 Timothy 5. But sadly, a good number of professing Christians are frankly embarrassed by the Bible. Instead of flatly affirming biblical truth, they’ll subject it to death by caveat, telling you 19 things they don’t mean about biblical womanhood before they say a solitary thing about what they do mean.

No true Christian is embarrassed by Scripture. Every true Christian loves Scripture. We recognize that the life men are called to and women are called to is often tough. Daily Christianity, what we could call Christianity of the trenches, is not a highlight-reel existence. It’s challenging, frankly. It’s often anonymous. It’s regularly taxing. It’s not a picnic. You’re carrying a cross on your back every second you live, after all.

The true problem here is not really a debate over womanhood or the meaning of work. Godly women (or men for that matter) aren’t actually tied up into little twisted exegetical knots over whether Scripture calls them to homemaking, motherhood, and marriage (as most are). No, the Bible is clear on these things. The true problem here most of the time is a problem of the heart. We don’t like what’s before us. We belittle it. We hold a grudge against God for calling us to it. We want more. We want something different. We want out. We want what we want. We have a heart problem, not an intellect problem.

Here’s some rugged truth in response: Christianity doesn’t “spectacularize” our existence. For most of us, life is plain, ordinary, and usually anonymous. Christianity doesn’t make your life a living reality TV show of unending awesomeness. What Christianity does do is enchant the ordinary. All your humble life, so much of it quiet, matters to God. All your existence is “coram deo” (unto God). No moment is ACTUALLY anonymous. Every moment a Christian is a priest unto God, performing meaningful service even when doing tasks that look–and are–totally ordinary and unspectacular (1 Peter 2:4-5).

This is true for men, and this is true for women. Women haven’t been saddled with a bad hand. The call to be a wife and mother (if called as most women are) and homemaker and nurturer (as all women are) is a call from God. Yes, it’s challenging. But so is what men are called to as providers. Most men provide through work that is often gritty and unspectacular and hard. The work of provision by a man is not normally primed for a really exciting “Day in the Life” series on YouTube. Most of what men do on a daily basis to glorify God is humble. A lot of it can be challenging. Some of it is downright hard.

So, a word of exhortation: don’t complain. When you do, when your heart grumbles, when little wisps of ingratitude and anger against God’s will for your life slip out in passive-aggressive conversation, repent. Stop whining. Stop making excuses. Claim the grace that is in Christ. Know that you are a work in progress. We all are. We all fail. We all stumble. We all whine. We all need to confess our sin to God. Every last one of us, not just a few of us. Then, remember that you are thinking wrongly; you’re lying to yourself. You’re preaching the wrong message. God doesn’t hate the simple and the plain; God loves the simple and the plain. God has called you to these good gifts, and his call does not mean you are “squandering” anything. In truth, the only thing you’re “squandering” are the moments you’re complaining. Those are moments that you and I could be using to praise and worship our king even in the most common tasks of our days.

So yes, keep this glorious reality before you at all times: Christianity sanctifies the ordinary. It does not rob a quiet life of dignity; it infuses a quiet life with dignity. It lets women wake up to their true nature and calling, just as it lets men wake up to their true nature and calling. If you are in the trenches today, and your life feels rather plain and simple, let me assure you that you are very likely right in the center of doxological Christianity. God loves your humble work; God will honor your day-by-day faithfulness; God is an incredibly kind God who set up the world to run as it does, so God clearly values the unspectacular, the anonymous, and the self-sacrificial.

If you doubt that last part, just think about Jesus’ life. Though the incarnate Son of God, he spent most of his life doing nothing that landed on the front page. He lived most of his life exactly like you live yours, and all of it mattered, and all of it glorified his Father. So too can your life, when you embrace the enchantment of the ordinary in the power of the Spirit.