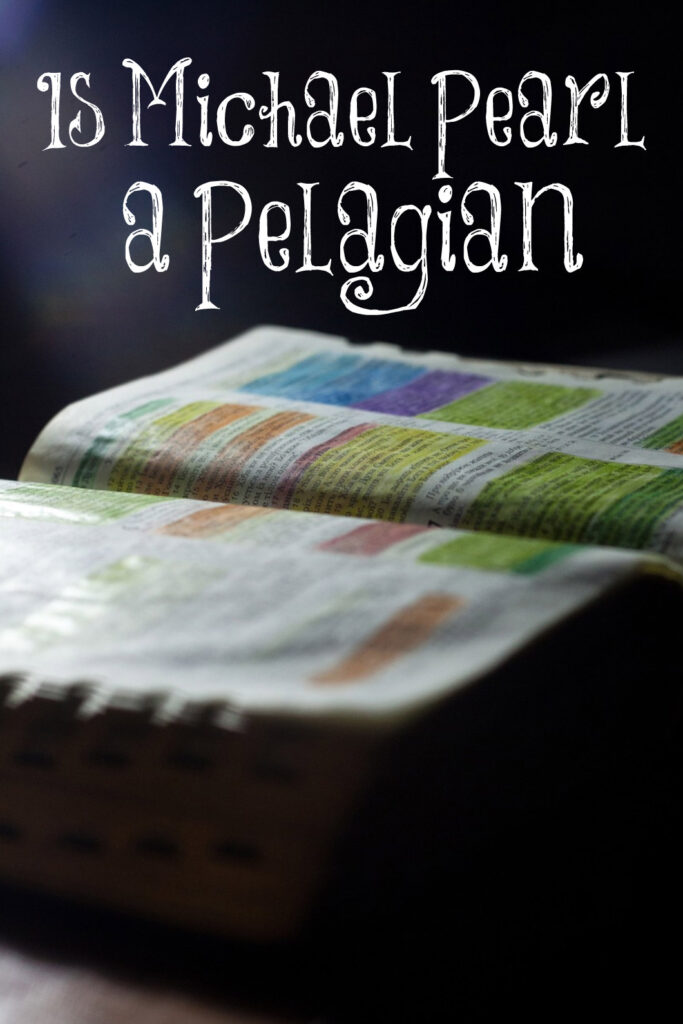 People have accused me of being a Pelagian even when I had no idea what it meant. Years ago, we attended a week long conference with Michael Pearl teaching Hebrews. It was fantastic! I went on to listen to all of his teachings of many of the books in the New Testament. I love his teachings. Do I agree with him 100 percent? No, but I don’t agree with anyone 100 percent, and I bet you don’t either. He is a student of God’s Word, and he’s a wise men. Here are his words on whether or not he’s a Pelagian.

One noted critic states on his web site:

“The most grievous error that I found in No Greater Joy Ministries is the heresy of sinless perfectionism or “entire” sanctification. We see this in the article “Living Parallel Lives in the Same Space” from the Jan./Feb. 2005 issue of No Greater Joy. The doctrine of perfectionism is first of all clear from what Michael Pearl plainly states. He has entitled his teaching “Sin No More” (p. 21). He says the doctrine of sanctification does not consist of “principles for you to apply” (p. 11), meaning there is nothing to do to achieve sinless sanctification but to understand and accept one’s position in Christ.”

The accuser put the word “entire” in quotes as if he were quoting me. I have never used the terms “sinless perfection” or “entire sanctification,” nor have I taught anything that is remotely similar. All one need do is search the web, or a good church history book, to determine the specifics of that heresy in history. The doctrine of sinless perfection is the belief that believers can have a second work of grace whereby the old nature is eradicated, making it impossible for them to sin again. There is nothing in my teaching that is similar in any way.

Either he has not familiarized himself with my teaching, or he has another agenda that provokes him to deliberately slander my Biblical doctrine. What could prompt a man to attack a ministry on such false premises?

My accuser admits in his diatribe against me that it is the name of the series that led him to conclude that I taught the old Salvation Army doctrine of “sinless perfection.” He did not listen to the audio teaching. He just read the title. My teaching on ceasing to sin is exactly what Baptists and other Bible-believing Christians have taught for 1900 years. It is not new, and it is certainly not heretical, except in a modern church that preaches that there is no provision in Christ for overcoming all sin.

My series, Sin No More, does not teach that it is possible in this life to achieve a “state” whereby it is impossible to sin—as does the doctrine of sinless perfection. I teach that through our death with Christ and participation in his resurrection, it is possible in this life, moment by moment, temptation by temptation, to reckon one’s self dead indeed unto sin but alive unto God and, thereby, to fulfill Christ’s command to “sin no more”. There is no such condition as being unable to sin, but the Christian is able not to sin. Why does that bother some people? Shouldn’t we expect our ministers to obey God in all things, to walk in holiness both publicly and privately—all the time?

In this age of carelessness and antinomian Christianity, where preachers walk after the flesh, embezzle money, commit adultery or sodomy, and where worship leaders are found guilty of fornication, I am gratified to be accused of teaching a “heresy” that we should and can sin no more. It is an honor to be criticized for saying that I have been enjoying the blessing of the sanctifying power of the gospel of Jesus Christ. I have never said I am sinless. How could I? I have a wife and family who know me too well!

If my material is read and understood, the only thing you could accuse me of is helping people to stop sinning. So what is the problem? The women whose husbands have ceased pornography or adultery are not complaining about their husbands listening to the series “Sin No More.” The men who have overcome their anger and lust through reckoning themselves to be dead to sin are not accusing me of heresy. The murderers and rapists in prison who have listened to my teaching and then been released back onto the streets to sin no more are not accusing me of heresy. It is people who are comfortable with the modern belief and practice that we are all slaves to sin and cannot overcome temptations in this life, who are hasty to draw false conclusions about what I teach, simply based on the title of an audio message. I take the misinformed criticism as a compliment to my teaching, an honor to God, and a recommendation for the gospel of deliverance from sin.

“Michael Pearl is a Pelagian.”

Michael Answers: Sounds downright scary—a Pelagian! I remembered studying this when I was in Bible College, but I had forgotten the details of what Pelagius taught, so I looked it up in several books and on the web to see if Pelagius was also a Bible believer and taught the truth as I do. If so, I would be proud to be identified with him or anyone else who believes the Word of God. But, no, sorry, I am not a Pelagian, and if someone today taught what it is reported that he taught, I would be among the first to condemn the teaching.

So, the person who charges me with this ancient, fifth-century heresy shows complete ignorance of Pelagianism or of my Biblical doctrine.

In 411 A. D., Paulinus of Milan came up with a list of six heretical points in the Pelagian message. Keep in mind as you read these six charges, that they are the historical record of what he believed.

(1) Adam was created mortal and would have died whether he had sinned or not;
(2) The sin of Adam injured himself alone, not the whole human race;
(3) Newborn children are in the same state as Adam was before his fall;
(4) Neither by the death and sin of Adam does the whole human race die, nor will it rise because of the resurrection of Christ;
(5) The law as well as the gospel offers entrance to the Kingdom of Heaven; and
(6) Even before the coming of Christ, there were men wholly without sin.
The above list is the historical doctrine of Pelagius. I do not agree with any of the 6 points.

A historian has written: “It is purported by those who charged Pelagius with heresy that he taught that the human will, tempered in good deeds and rigorous asceticism, was sufficient to live a sinless life. According to historical documents, he told his followers that right action on the part of human beings was all that was necessary for salvation. To him, the grace of God was only an added advantage; helpful, but in no way essential. Pelagius disbelieved in original sin, but said that Adam had condemned humankind through bad example, and that Christ’s good example offered humanity a path to salvation, not through sacrifice, but through instruction of the will. Jerome emerged as one of the chief critics of Pelagianism, because, according to Jerome, Pelagius’ view essentially denied the work of the Messiah; he personally preferring ‘teacher’ or ‘master’ to any epithet implying divine power.”

That is so far from what I teach that it makes one wonder what it is in my teaching that really bothers my critics. So, you can tell the parrots who repeat this false charge that they are falsely accusing the brethren—normally Satan’s job.

“Michael Pearl is an Arminian.”

Michael Answers: That doesn’t mean from Armenia, a republic in western Asia. It means different things to different people, but to a Calvinist, it is anyone who is not a five-point Calvinist. But I can emphatically state that I am not a follower of Jacobus Arminius (1560-1609), any more than I am a follower of Augustine or Calvin.

Arminianism was started by Jacobus Arminius, who was born slightly before John Calvin died. He was actually taught by Calvin’s son-in-law and adhered to Calvinist teachings until one day, when forced to defend his beliefs, he found that his opponent could more ably defend his views against Calvinism. This caused Arminius to reject his Calvinistic background and seek to modify Calvinism so that God might not be considered the author of sin, nor man an automaton in the hands of God.

We read on a Calvinist’s web site: “Arminianism is the theological basis for the Methodist, Wesleyan, Nazarene, Pentecostal, Free Will Baptist, Holiness, and many charismatic churches.”

Arminius was just a backslidden Calvinist who tried to modify Calvinism. He is too Calvinistic for me. So my detractors will have to find someone far more to the right if they want to identify me with some historical position.

Only Calvinists call people Arminians, because they find it easier to build a straw man than to deal with a Bible believer’s true position. So, to them it is an “either/or” position that one must take. Either you are a Calvinist who believes in God’s sovereignty, or you are an Arminian who believes in salvation by works and eternal insecurity.

“At the heart of the controversy between Calvinism and Arminianism is the emphasis on the sovereignty of God by the Calvinists and on the free will of man, or human responsibility, by the Arminians. Arminian theology teaches that man has free will and that God will never interrupt or take that free will away, that God has obligated Himself to respect the free moral agency and capacity of free choice with which He created us. Calvinism, on the other hand, emphasizes that God is in total control of everything, and that nothing can happen that He does not plan and direct, including man’s salvation. Both doctrinal positions are logical, both have Scriptures to back up each of their five points, and both are, in my opinion, partially right and partially wrong.” (Larry Taylor).

As Philip Schaff put it in his History of the Christian Church, “Calvinism emphasizes divine sovereignty and free grace; Arminianism emphasizes human responsibility. The one restricts the saving grace to the elect; the other extends it to all men on the condition of faith. Both are right in what they assert; both are wrong in what they deny. If one important truth is pressed to the exclusion of another truth of equal importance, it becomes an error, and loses its hold upon the conscience. The Bible gives us a theology which is more human than Calvinism and more divine than Arminianism, and more Christian than either of them.”

Although I am not a Calvinist, many Calvinists who hear me preach say that I sound like one. I am just a Bible believer. I don’t need to reduce it to a philosophy. I believe all that it teaches. I am not uncomfortable with any passage. I don’t find it necessary to switch translations to prove my point or to ignore some Scripture while emphasizing others.

You many call me what you like. What is important to me is that my kids call me often, and that my grandkids call me Big Papa, and the inmates in hundreds of prisons call me a saint. But best of all, God has called me, and continues to call me His without distinction.