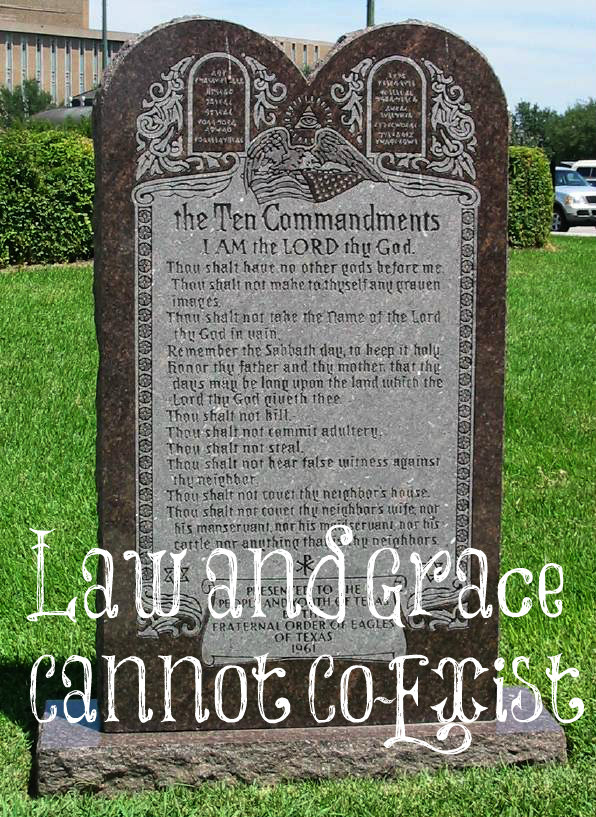 The Law and Grace cannot co-exist even as Christianity often times tries to make the two do so. Standing firmly on God’s Word is our goal and yet it is as hard to do as riding a horse bareback.  You can ride a long way at times tightly to the mane of your stallion, but it is almost impossible to get up the hills and through the woods without getting knocked off a couple times and having to get back on. When you sit slightly too far to one side of the truth it is easy to slip off, so the believer is always making adjustments trying to stay balanced in the full Word of God, not just one verse, or one chapter or one book.

I could list a multitude of truth issues like election, eternal security, depravity, church polity, submission, but nothing throws believers off the horse of truth more than Grace versus the Law. Some are so far off the truth that they are sitting in the mud of unrighteousness proclaiming “love wins” and everyone is going to heaven, and their counterparts are “black and white” legalists declaring that no one can be a Christian and drink wine, dance or smoke a cigar. The great preacher Charles Spurgeon once said,

“Well, dear friends, you know that some men can do to the glory of God what to other men would be sin. And notwithstanding what brother Pentecost has said, I intend to smoke a good cigar to the glory of God before I go to bed to-night.  If anybody can show me in the Bible the command, ‘Thou shalt not smoke,’ I am ready to keep it; but I haven’t found it yet.”

There you go:  By grace people are all running out to buy cigars and the legalists are calling him unsaved. I hate anything and everything about smoking and can’t stand to be around the putrid and disgusting stuff, but when the Christian boys once a year pull out the Poker cards, whisky and cigars, I am never invited, but I am not about to call them sinners or unsaved because they are exercising a freedom that I do not have.

The apostle Paul found himself between the era of the Law and Grace and God used Him, and his Pharisaical training to be the ideal writer of the horse of truth on these matters. As much as he loved the laws of Judaism and the easy nature of living within a set of “do’s and don’t” and rules, he refused to allow Peter and the others to throw the yoke of the law upon the Church. He battled ferociously to begin the church as “new wine skins” and outside the old box of Judaism and the law that could never achieve the righteousness of God.

“For what the law could not do, in that it was weak through the flesh, God sending his own Son in the likeness of sinful flesh, and for sin, condemned sin in the flesh: That the righteousness of the law might be fulfilled in us, who walk not after the flesh, but after the Spirit.” (Romans 8:3-4)

The apostle Paul devotes almost an entire letter to the Galatians challenging them not to go back under the old law that is weak and fading away. To instead grab a hold of the law of the Spirit of life in Christ Jesus; that law that is now written on our hearts, that we might walk in the freedom of our newness of life. No longer focused on sin, but righteousness. No longer focused on the “do’s and don’ts” of religion, but instead allowing the Word of God to be living and active inside of us:

“For the word of God is living and active, sharper than any two-edged sword, piercing to the division of soul and of spirit, of joints and of marrow, and discerning the thoughts and intentions of the heart.”  (Hebrews 4:12)

Lori’s 87 year old Mom recently asked Lori what she wanted from her home when she passed on and Lori told her all she wanted was her old KJV Bible. Her Mom told her she can’t read it anymore and wanted her to have it now. So Lori brought it home and was so happy as she showed it to me and said, “I would love to have a new Bible every year because I love to highlight and mark it up as I read it.” She started with the book of Galatians and this was its introduction:

Paul also said the Judaisers in their teachings disregarded the inferiority of the law to the Gospel of grace (4:21-31). The law had limitations (3:1-22), including the fact that it could not create a spiritual experience. Neither could the law secure right standing with God or establish the covenant. The true function of the law was to serve as a guide to lead men to Christ (3:23-29), and it helped prepare the world for redemption (4:1-11).

Dealing with the essential inferiority of the law as compared to the Gospel of grace (4:21-31), the example of Ishamael and Isaac is given. Ishmael was the son of bondage, and Isaac was the son of promise. Law and grace cannot co-exist.”

Christian, do not let anyone tell you that you are missing out on the Christian life if you don’t keep the do’s and don’ts of the Regular Baptists. Don’t go put yourself under Judaism again, or Catholicism or anything that is against what Galatians teaches. Please don’t fall prey to those who would have you think that you need some second work of grace so you can speak in tongues, or need to exercise quiet solitude and meditation to find a higher level of spirituality.  There is no higher level of spirituality than walking in the Spirit that God has given to you.

But, please also don’t fall so far off the horse of truth that being under grace means you can sin without consequence, and that “God’s love wins” so everyone, but the worst of the worst are going to heaven. If you are not showing the fruit of God’s Spirit by walking in obedience to His Word, by having the joy of the Spirit and by having a desire to please the Lord Jesus, please find someone who can lead you to the Lord Jesus. You are either not saved or you have some big set of sins that have so encumbered you that you cannot live the Christian life as God intends you to live.

Hey Christian, you do understand don’t you that the Christian life is impossible? That the only chance you have of being happy, whole and fruitful is to plug directly into the source of life itself, Jesus Christ.  You have been made a new creature who is freed from sin and dead to sin, now go out each moment of the day and begin to live out your new reality. It takes time, not to be freed from sin but to learn how to walk in your new found freedom so that the joy of the Lord may shine through you.

So how are you doing riding the horse of truth today? Does Satan have you right where he wants you either so focused on how unworthy and sinful you are, or worse yet, so focused on not sinning that it perturbs you to watch your brother or sister in Christ sip on a glass of wine?  We must as believers keep pointing each other to our walk in the Spirit and when we sin, we must swipe it off quickly and move straight away into righteousness without giving the dust a second thought, instead of jumping into the mud and wallowing. Stop trying so hard, or not trying at all. Instead use your new found freedom to shine the righteousness God.

If God calls you righteous than sure enough you are, so go about living like a free child of God whose one heart focus is living in Him and pleasing him.  Hold on tightly to that horse of truth as it is a wold and thrilling ride for those who can live without the do’s and don’t yet walk in the Spirit of the righteousness of God.