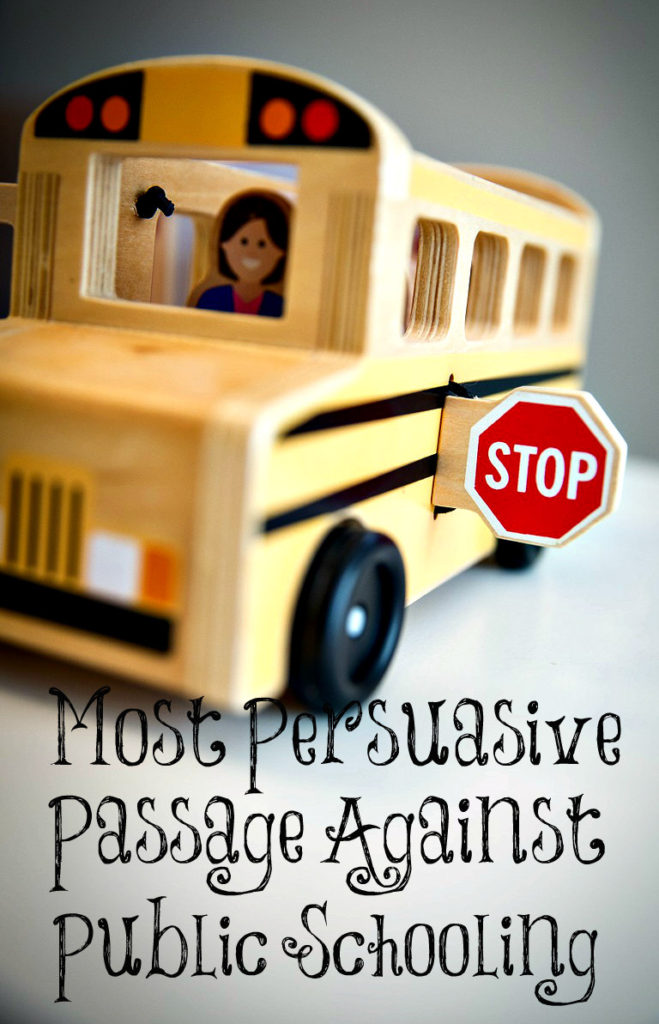 This is the most persuasive passage in the Bible that shows God’s will for us and is an argument against sending our children to public schooling for most of their entire childhood years:

Be ye not unequally yoked together with unbelievers: for what fellowship hath righteousness with unrighteousness? And what communion hath light with darkness? And what concord hath Christ with Belial? Or what part hath he that believeth with an infidel? And what agreement hath the temple of God with idols? For ye are the temple of the living God; as God hath said, I will dwell in them, and walk in them; and I will be their God, and they shall be my people. Wherefore come out from among them, and be ye separate, saith the Lord, and touch not the unclean thing; and I will receive you. And will be a Father unto you, and ye shall be my sons and daughters, saith the Lord Almighty.
2 Corinthians 6:14-18

What do these verses mean? Do they mean we can’t do anything with unbelievers? Should we never be around them? No! We are called to be salt and light and we can’t be these things if we can’t be around those to whom we are called to be salt and light. But we must not ever participate in the deeds they participate in if they are not good and right. We aren’t to be entertained by those things they are entertained by if they don’t glorify the Lord.

Our children are not the ones who are called to go out and be missionaries to a lost world. They are not called to spend hours every day, five days a week for many years with unbelievers and learning from unbelievers who have taken out all of God’s Word and His ways from the public schools. The parents are the ones who are exhorted to raise their children in the nurture and the admonition of the Lord and public schools do NOT do this.

“One of the top indicators of whether or not a child will continue in the faith is where, how and by whom he or she is educated. We cannot ignore this fact. How long will we twiddle our thumbs while the church loses 70-88% of its teens by the end of their freshman year in college and homeschoolers remain in the faith of their families at rates above 90%? How many times will the P.E.E.R.S. test have to demonstrate the deleterious effects of government education on Christian worldview development before we admit that there is a price to be paid when we close our eyes and put our kids on the little yellow bus?”
~Dr. Voddie Baucham, Jr.

In researching all of the commentaries on these verses, I felt this one summed it up the best:

“The true principle here seems to be, that if a Christian in such a place is expected to lay aside his Christian principles, and if it would be deemed indecorous and improper for him to introduce the subject of religion, or if religion would be regarded is entirely inconsistent with the nature of the amusement then he is not to be found there. The world reigns there, and if the principles of his Lord and Master would be excluded, he should not be there” (Barnes’ Notes on the Bible).

The world and its ways reign in the public schools. God has been completely excluded from them and they are becoming more evil by the day it seems, yet many believing parents send their innocent and teachable children to these schools all of their lives and wonder why their children are looking and acting like the ways of the world, then many depart from the faith.

Bad company corrupts good morals, we are warned, and children should not be in the public schools. The last thing that godly parents should want is to lose their children to the world, for there is no greater joy than to have children walking in truth. Yes, this takes a lot of time and sacrifice but what is more worthy of this than your children’s eternal souls?

I am going to share a few more passages from commentaries on this subject that I found interesting and profitable to the discussion.

“Its meaning is, however, determined by the use of the cognate noun in Leviticus 19:19 (“Thou shalt not let thy cattle gender with a diverse kind”). Cattle were unequally yoked together when ox and ass were drawing the same plough (Deuteronomy 22:10). Men and women are so when they have no common bond of faith in God” (Ellicot’s Commentary).

Be not unequally yoked with unbelievers — Christians with Jews or heathen, godly persons with the ungodly, spiritual with such as are carnal. The apostle particularly speaks of marriage; but the reasons he urges equally hold against any needless intimacy or society with them. Of the five questions that follow, the three former contain the argument, the two latter the conclusion.

For what fellowship hath righteousness with unrighteousness — The righteous can have no profitable, agreeable, or comfortable society or converse with the unrighteous. What communion hath light — That is, the state of light and knowledge, into which you are brought by divine mercy; with darkness — That deplorable state of ignorance and folly, vice and misery, in which they continue to be lost? And what concord hath Christ — Whom you serve; with Belial — To whom they belong, and who reigns in all the children of disobedience? Or what part — In time or in eternity; hath he that believeth — In Christ and his gospel, and who is a true, genuine disciple of Christ; with an infidel”(Benson Commentary).

“It is wrong for believers to join with the wicked and profane. The word unbeliever applies to all destitute of true faith. True pastors will caution their beloved children in the gospel, not to be unequally yoked. The fatal effects of neglecting Scripture precepts as to marriages clearly appear. Instead of a help meet, the union brings a snare. Those whose cross it is to be unequally united, without their willful fault, may expect consolation under it; but when believers enter into such unions, against the express warnings of God’s word, they must expect must distress.

The caution also extends to common conversation. We should not join in friendship and acquaintance with wicked men and unbelievers. Though we cannot wholly avoid seeing and hearing, and being with such, yet we should never choose them for friends. We must not defile ourselves by converse with those who defile themselves with sin.

Come out from the workers of iniquity, and separate from their vain and sinful pleasures and pursuits; from all conformity to the corruptions of this present evil world. If it be an envied privilege to be the son or daughter of an earthly prince, who can express the dignity and happiness of being sons and daughters of the Almighty?” (Matthew Henry).

“He here says, that one mode of remuneration would be to yield obedience to his commands, and to separate themselves from all improper alliance with unbelievers. ‘Make me this return for my love. Love me as a proof of your affection, be not improperly united with unbelievers. Listen to me as a father addressing his children, and secure your own happiness and piety by not being unequally yoked with those who are not Christians.’

It is implied in the use of the word that there is a dissimilarity between believers and unbelievers so great that it is as improper for them to mingle together as it is to yoke animals of different kinds and species. The ground of the injunction is, that there is a difference between Christians and those who are not, so great as to render such unions improper and injurious. The direction here refers doubtless to all kinds of improper connections with those who were unbelievers.

It has been usually supposed by commentators to refer particularly to marriage. But there is no reason for confining it to marriage. It doubtless includes that, but it may as well refer to any other intimate connection, or to intimate friendships, or to participation in their amusements and employments, as to marriage. The radical idea is, that they were to abstain from all connections with unbelievers – with infidels, and pagans, and those who were not Christians, which would identify them with them; or they were to have no connection with them in anything as unbelievers, pagans, or infidels; they were to partake with them in nothing that was special to them as such” (Barnes’ Notes on the Bible).

Beware lest any  man spoil you through empty philosophy and vain deceit, after the tradition of men, after the rudiments of the world and not after Christ.
Colossians 2:8

11 thoughts on “Most Persuasive Passage Against Public Schools”