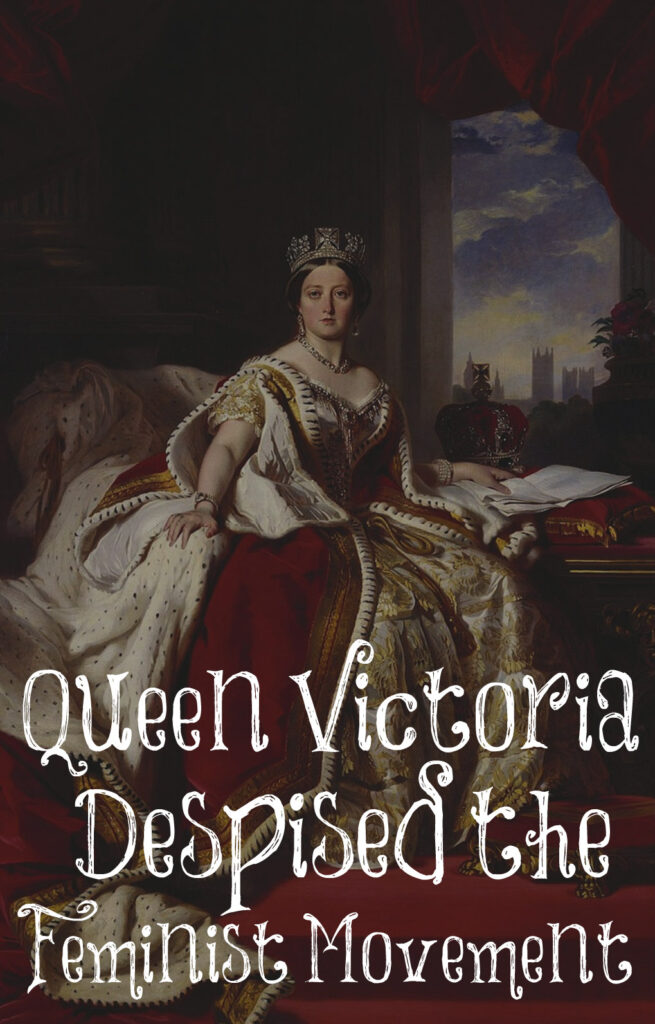 You would think that Queen Victoria embodied the feminist movement. After all, she was the Queen of England for many, many years. But if you read her words, you will find that she actually despised feminism. She was wise enough to know the damage that it was doing.

“I am most anxious to enlist everyone who can speak or write to join in checking this mad, wicked folly of ‘Women’s Rights,’ with all its attendant horrors, on which her poor feeble sex is bent, forgetting every sense of womanly feelings and propriety. Feminists ought to get a good whipping. Were woman to ‘unsex’ themselves by claiming equality with men, they would become the most hateful, heathen and disgusting of beings and would surely perish without male protection.”

I have enlisted myself to speak and write against the wicked folly of feminism and the destruction it has wreaked upon this nation and every nation that has embraced it. We can see the damage that feminism has done to women. Many have absolutely become hateful. These women on TV that spout off their hatred and nonsense are never satisfied. Feminism is a pit that descends deeper and deeper into the abyss. Once women have tasted of it, it’s never enough. They fight for more and more of their supposed “rights,” even the ability to slaughter their own babies. What can be more depraved than that? For we were created to be mothers!

“She didn’t support the suffrage movement at all; in fact, she was very much against everything the suffragettes stood for. And, while she ruled the nation because it was her duty she also wrote, ‘We women are not made for governing.'” No, we were not. God has men for governing. It pains me to see so many women running for political offices these days. Our culture has suffered terribly since women have left their homes. Who is available for the children, the elderly, the sick, and all of those in need? Who is at home making it a warm and inviting place for their husbands and children and even strangers?

“In a letter written by Victoria in 1852 to her uncle Leopold, King of the Belgiums, she wrote that her husband Albert ‘grows daily fonder of politics and business and is wonderfully fit for both…and I grow daily to dislike them both more and more. We women are not made for governing and, if we are good women, we must dislike these masculine occupations.'” God created men to be the leaders and in the workforce to provide. He made them to be the protectors of societies too. We can’t go against His ways and think anything good will come of it.

“Victoria really made her feelings clear when she added that she ‘feels so strongly upon this dangerous and unchristian and unnatural cry and movement of ‘woman’s rights’… that she is most anxious that Mr. Gladstone and others should take some steps to check this alarming danger and to make whatever use they can of her name… Let woman be what God intended; a helpmate for a man – but with totally different duties and vocations.” Amen, Queen Victoria. God’s ways are the opposite of the feminists’ ways. Feminism is clear rebellion against God which is the sin of witchcraft (1 Samuel 15:23). Witchcraft is exploding due to feminism’s influence. If you aren’t worshiping God Almighty and living according to His plan, you are worshiping Satan and living according to His plan which leads to death and destruction.

And if it seem evil unto you to serve the Lord, choose you this day whom ye will serve; whether the gods which your fathers served that were on the other side of the flood, or the gods of the Amorites, in whose land ye dwell: but as for me and my house, we will serve the Lord.
Joshua 24:15