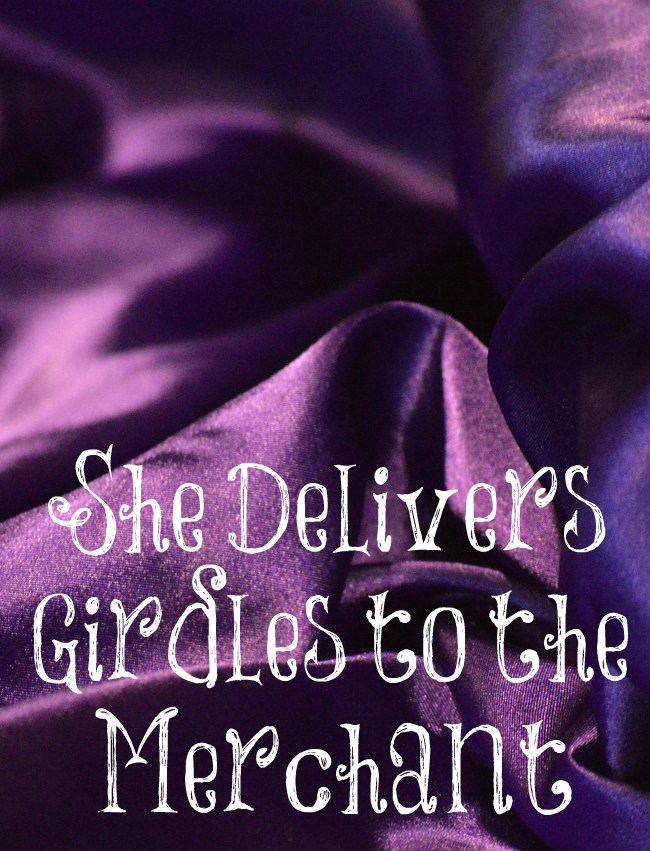 Women who are finding my blog for the first time try to convince me that women in the Bible had careers like they do and will use several of the verses about the Proverbs 31 woman. If the Proverbs 31 woman had a career, so should they, they claim. Let’s examine the old commentaries to see what they have to say about it in our continuing study of this godly woman. I don’t believe any woman in the entire Bible worked in submission to a boss, worked hours five days a week away from home, and left their children in the care of others, as I have repeatedly taught.

She makes fine linen, and sells it; and delivers girdles to the merchant.
Proverbs 31:24

“She not only seeks wool and flax, and spins it, but makes it up into fine linen, which she disposes of to advantage to herself and family….and delivereth girdles unto the merchant; to dispose of them for her; either to sell to others, to the Egyptian priests which wore them; or for their own use, to put their money in, girdles being used for that purpose” (Gill’s Commentary).

There were no factories, malls, or online shopping stores for clothing as there are today so she had to make her own clothing for her family. She also sells the linen that she makes from wool and flax and spins it into linen and makes girdles (a band or belt; something drawn round the waist of a person “Such rich and elaborately worked girdles the mistress could readily barter with Phoenician merchants, who would give in exchange purple (verse 22) and other articles of use or luxury” – Pulpit Commentary), then gives these to merchants to sell for her.

All of her work is in her home, most likely with her daughters at her side helping her. Yes, she makes some money from home but since she looks well to the ways of her household, she doesn’t allow it to distract from her main responsibilities of family and home.

“This verse adds as it were the finishing stroke to the picture. While all home duties in every relation, to her husband, her children, her servants, and to the poor around her, are fully and faithfully discharged, she is yet able to increase her store by the sale of what the industry of herself and her maidens has produced. At the same time it throws an interesting light upon the state of society, in which the mistress of a large household and the wife of one who took his place ‘among the elders of the land’ did not think it unworthy of her to engage in honest trade” (Cambridge Bible).

Priscilla made tents by her husband’s side and Lydia was a “seller of purple” so we know it’s not wrong for women to make money but their primary responsibilities are at home where they are to be keepers at home. There are many women who make some money from home if they need the extra income or their husbands want them to help provide but it is not their responsibility to provide for the family. There isn’t one verse in the Bible that instructs women to make money and provide. This was the man’s job given to him from the beginning and any man who doesn’t provide for his family is “worse than an infidel (unbeliever).”

“The Church therefore made and sold this fine garment, because she inparted in words that faith which she had woven by belief; and received from unbelievers a life of upright conversation. And she delivered a girdle to the Canaanite, because by the might of the righteousness she displayed, she constrained the lax doings of the Gentile world, in order that that might be maintained in their doings which is commanded. ‘Let your loins be girded about’” (Pulpit Commentary).

As godly woman, our aim in life is not to be making money and having careers as our culture pushes upon us, but to share our faith with a lost world and especially to our children. They need this more than they need more stuff; for when we peer into eternity, this life on earth is short and only what we do for Christ will last. Unbelievers around us should be able to see the difference that Christ makes in us by our transformed lives and being salt and light that adds joy and flavor to life. Our loins need to be girded about with the truth of God’s Word so any extra time that we have needs to be used in studying His Word and letting it dwell deeply within us so we don’t blaspheme the Word of God by ungodly behavior. This is what our culture needs, women. They need to see women loving their husbands and children, dressing modestly, and being keepers at home; for this adorns the Gospel of Christ.

2 thoughts on “She Delivers Girdles to the Merchant – Proverbs 31:24”