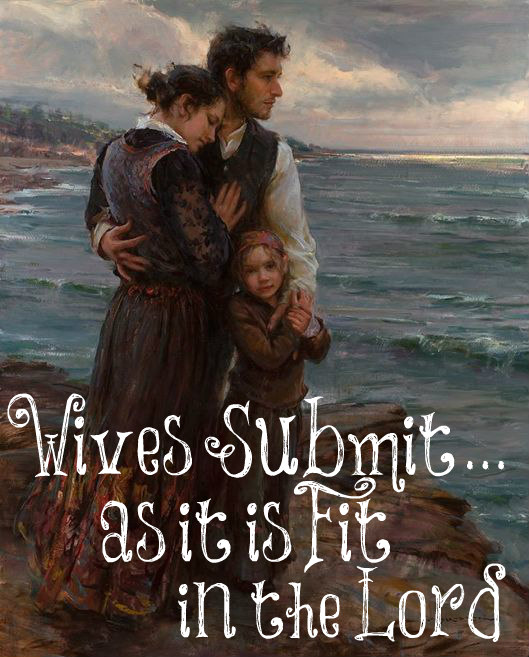 In Colossians 3, Paul is clearly explaining to us how we should live our lives as believers in Jesus Christ. This is a wonderful chapter and worthy of study. He encourages us to seek those things above, get rid of all sin in our lives, be loving and kind to others, and let the Word of Christ dwell in us richly. Then he wrote, “And whatsoever ye do in word or deed, do all in the name of the Lord Jesus, giving thanks to God and the Father by Him” (Colossians 3:16).

“…in the Lord— In obedience to the Lord, and in all lawful things” (Benson Commentary). Yes, some have tried to convince us that wives should submit to their husbands in everything, even if this includes blatant sin against the Lord. No, a wife should never submit if a husband asks her to do something that is evil or harmful. Other than this, I firmly believe that it is the husband who has the authority to lead his wife since he is God’s designated head over her.

What about a wife’s convictions concerning modesty, being a keeper at home and not having a career, watching a movie that she finds inappropriate, and homeschooling her children even when her husband doesn’t want her to do this? What if the husband believes her modesty standards are too strict? What if he wants her to work outside of the home, watch a few movies that have some questionable elements in it, and send her children to public schools? Should she stand her ground and do as she is led? NO!

God gives a wife in this situation clear instructions. Likewise, ye wives, be in SUBJECTION to your own husband; that, if any obey not the word, they also may without the word be won by the conversation of the wives (1 Peter 3:1). Subjection means “the state of being under the power, control, and government of another.”

So what if a husband asks a wife to dress not quite so immodestly? She needs to dress as modestly as she can within what her husband wants but continue to live in subjection to him with godly behavior. What if he wants her to work outside of the home? She needs to work outside of the home and pray the Lord will convict her husband by allowing her to come home but in the meantime, she needs to go about winning him without a word. What if he wants her to watch a questionable movie? One godly friend of mine has a husband who wants her to snuggle with her and watch some of these types of movies. She closes her eyes during those parts and prays for her husband. What about sending the children to public schools? She sends them to public schools without fighting him but living in subjection to his leadership and gives it all to the Lord in prayer.

“Subjection of wives to their own husbands is ‘fit’ and proper in its own nature, by reason of the original creation of man, and of the woman from him: man was made first, and then the woman; and the woman was made out of the man, out of one of his ribs; and so, though not to be trampled under his feet, but to be by his side, and an help meet to him, yet not to be head, or to rule over him.

“Moreover, the woman was made for the man, and not the man for the woman; add to this, that the woman was in the transgression, and the means of the fall of man, which gave a fresh reason for, and made the obligation to subjection to him the stronger: and it is also a ‘decent’ and becoming thing for wives to be subject to their husbands; for as it is giving honour to them, it is a real ornament to themselves, and is one of those good works which women professing godliness should adorn themselves with; and makes more comely and beautiful than broidered hair; gold, pearls, or costly array, yea, than their natural favor and beauty: it is what is fitting ‘in the Lord.’

It is what he requires, not only what the law of God requires, see 1 Corinthians 14:34 and which was enjoined originally, see Genesis 3:16 and was charged as a duty under the legal dispensation; but is what is commanded by Christ under the Gospel dispensation, and is to be observed by all those that are ‘in’ him, that profess to be new creatures, converted persons, that so the word of God be not blasphemed, and the enemy have no occasion to reproach, see Titus 2:5 though this phrase may also be considered as a restriction and limitation of this subjection; that though it reaches to all things, yet only to such as are agreeable to the will of the Lord, and not contrary to the Gospel of Christ; for in these they are not to be subject to them, but to Christ the Lord; but in all other things they are, even as the church is subject to Christ: and when this is the case, such subjection is regarded by Christ as if it was done to himself; and indeed his honour and glory should be the governing view in it; see Ephesians 5:22” (Gill’s Exposition).

As godly women who are in Christ, these are our instructions. We are to submit to our husbands in everything unless they are clearly in violation of God’s Word and not simply our own convictions. Yes, some women try to pull small passages from the Old Testament to form their modesty standards but if God wanted clear modesty standards for the Church, His bride, He would have had the Apostle Paul or one of the other New Testament writers clearly state them.

Many women, me included, can easily make a case from scripture that God wants younger women to be keepers at home, raise our children in the nurture and the admonition of the Lord (not public schooling), and not watch any movies with any type of ungodliness in them but for a woman who is married to an unbeliever or a husband who is disobedient to the Lord, she has little hope of winning her husband to the Lord if she is continually fighting his leadership and demanding her own way based upon her convictions and the Word.

I believe this is why God specifically calls her to live in subjection to him in order to win him “without the word” (not constantly sharing her convictions or the Word with him) unless he asks her to do something evil or harmful to herself of her children. I believe this is why God used Sarah as our example in 1 Peter 3:6 of obedience to her husband. Abraham clearly asked her to do something that was against God’s clearly stated Word (tell a lie) and we are called to live in subjection to our husbands, too, and not to be “afraid with any amazement” but to trust in the Lord and His protection.