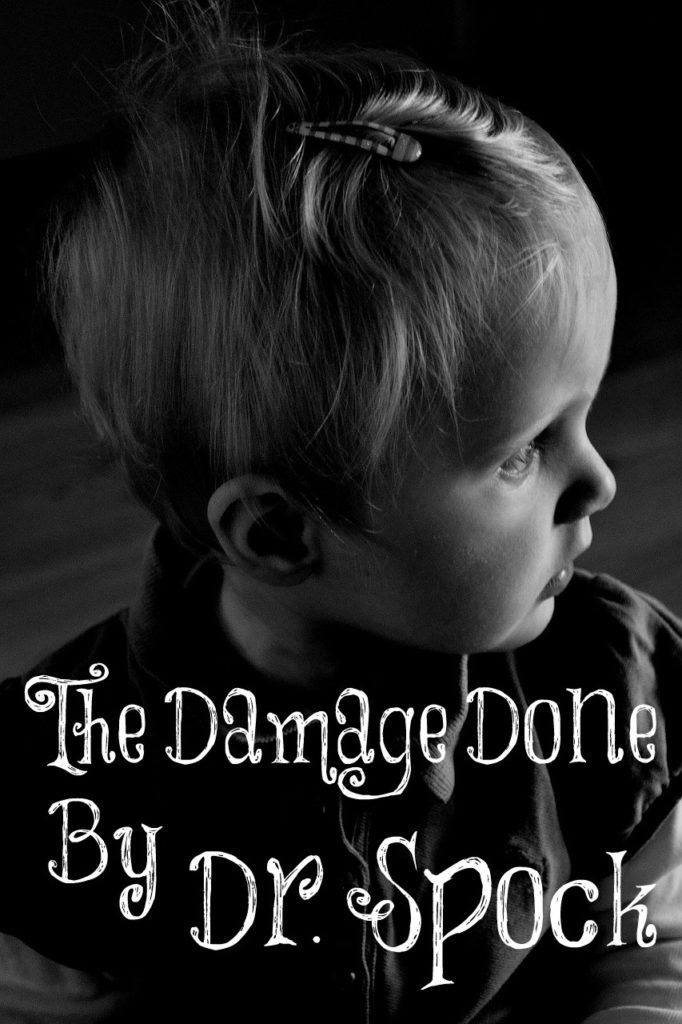 In 1946, Dr. Benjamin Spock wrote a child raising book that changed parenting styles everywhere. I am going to take some quotes of his and give a response and try to keep it biblical and from what I have seen as a result of his teachings. The majority of Americans still believe that spanking, NOT physical abuse, is still acceptable, thankfully, since they have seen how effective it is in dealing with children’s bad behavior. “In all 50 states and the District of Columbia, you are not forbidden by law to use corporal punishment on your child as long as the form of punishment is reasonable and does not cause injury.” (Here are each American state laws on it.)

“[Physical punishment] certainly plays a role in our acceptance of violence. If we are ever to turn toward a kindlier society and a safer world, a revulsion against the physical punishment of children would be a good place to start.” (p. 173) This is in direct contradiction to what God tells us in His Word. “Foolishness is bound in the heart of a child; but the rod of correction shall drive it far from him.” (Proverbs 22:15) “Oh, but the rod isn’t a physical instrument,” people will tell me. Really? Please study all of the verses that mention the rod and you will see that this isn’t true.

How does God discipline us? Is He only positive and encouraging? No! “For whom the Lord loves he chastens, and scourges every son whom he receives” (Hebrews 12:6). Chasten means “to correct by punishment; to punish; to inflict pain of reclaiming an offender; as, to chasten a son with a rod.” Scourge means “to afflict for sins or faults, and with the purpose of correction.”

Who are we to think we know better than God? No, God doesn’t mean that we should physically abuse our children in any way. We use the rod of correction as a tool to make them obey and this teaches them self-discipline which benefits them for life. Many things in God’s Word have been taken to extremes and have caused harm for people. This is not God’s way. His way ends in peace and goodness not in evil and harm.

“My other reasons for advising against physical punishment are, in brief, that it teaches children that might makes right, that it encourages some children to be bullies, and most fundamentally, that to the degree that it results in good behavior it’s because of the fear of pain. I have a strong belief that the best reason for behaving well is that you like people, want to get along with them, want them to like you.” (p. 173)

On the contrary, pain and fear are great motivators for good as I shared in the above verse about how God disciplines us. My children were all spanked when they sinned against us or others and none of them were bullies or got into physical fights with others. They were kind to others, respected authority, and were a joy to raise. A one year old can’t comprehend “liking people” as much as they can quickly comprehend a small amount of pain that is swiftly administered for disobedience.

“I don’t think physical punishment is necessary or particularly effective.” (p. 215) It sure has been for centuries before you wrote your book, Dr. Spock. Children were much better behaved than they are now. God’s ways will always trumps man’s ways.

“All schools should be friendly, creative places like the best I’ve seen. We should wean ourselves away from physical punishment.” (p. 33) When I went to elementary school, the principal had a wooden paddle in his office and he used it! Children were well-behaved for the most part. There was nothing going on like there is in the schools today. A swat on the back side is a quick, effective method against disobedience. (I just did read that 19 states still allow corporal punishment in schools.)

“Recently I visited a small private school . . . with the idea of asking children . . . what advice to parents they’d like me to incorporate in the forthcoming revision of Baby and Child Care. In a thoughtful mood, the class was unanimous that parents should not hit their children. . . One child added that if you’re crying and your parent tells you to stop and then hits you when you don’t stop, it only makes you cry more.” (p. 229-233)

And asking children how they should be disciplined is a wise thing? If he asked adults how they would like their government to run, I’m sure some immature adults would say that they shouldn’t be put in prison for abusing drugs, driving drunk, and getting tickets for speeding and running red lights. Children do NOT know best how they should be raised. Why not interview parents of adult children who are now upstanding citizens and ask how they raised their children instead?

“I hope American parents can outgrow the conviction . . . that physical punishment is necessary to bring up well-behaved children. . . [T]here are parts of the world where it has never occurred to any adult to strike a child. I have known personally or professionally dozens of families in which the parents never lifted a hand–or otherwise punished or humiliated their children–and yet the children were ideally cooperative and polite. Children are eager to be ever more grown up and responsible.” (p. 13)

Yes, I am sure parents can raise good children without ever spanking them but it takes a lot more time, energy, and effort and to tell you the truth, I haven’t seen many who are successful at it. In order for spankings to work, a parent must be consistent, firm, and loving. It doesn’t work without these three key ingredients.

“There are several reasons to avoid physical punishment. It teaches children that the larger, stronger person has the power to get his way, whether or not he is in the right. Some spanked children then feel quite justified in beating up on smaller ones. The American tradition of spanking may be one reason there is much more violence in our country than in any other comparable nation.”

No, it teaches children that they must obey and respect the authority in their lives, whether they be parents, teachers, coaches, bosses, and government which is a good thing. My children never beat up on the smaller ones. If they did, they would have been spanked and would have never done it again!

Since your book has been practiced, Dr. Spock, violence has sky-rocketed in our nation. No, thank you. I much prefer God’s ways to your ways since God is our Creator who made us and knows the right and perfect way to parent children.

8 thoughts on “The Damage Done By Dr. Spock”