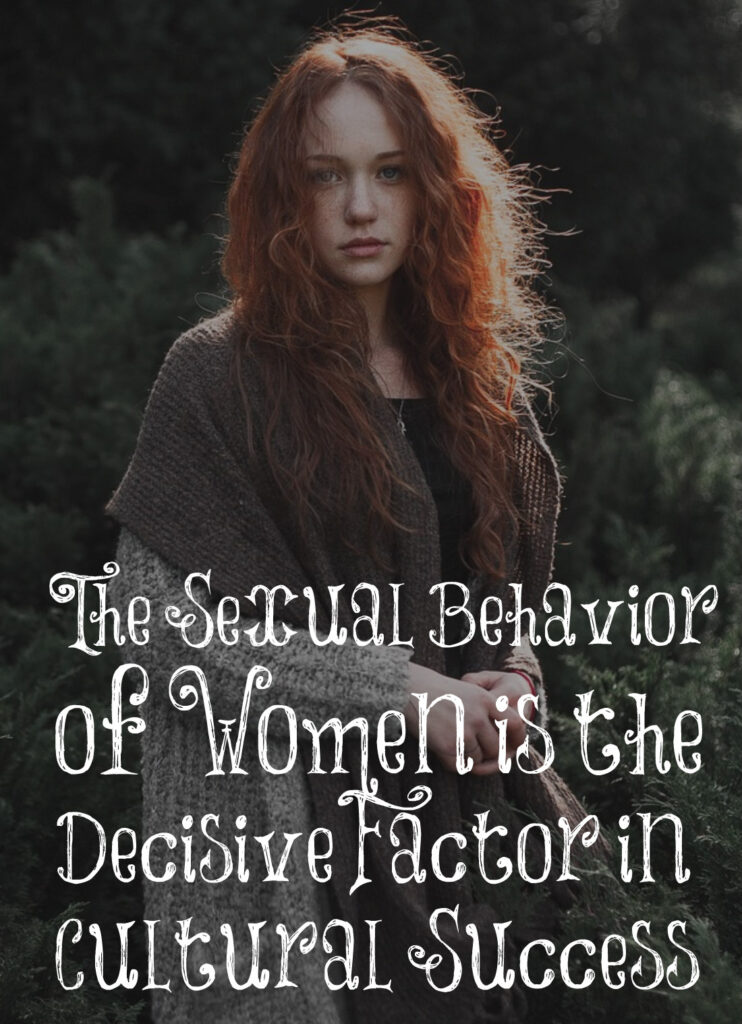 President John Adams wrote this in 1778:

“From all that I have read of history and government of human life and matters, I have drawn this conclusion, that the manners of women were the most infallible barometer to ascertain the degree of morality and virtue in a nation. All that I have since read and all the observations I have made in different nations have confirmed me in this opinion.

“The manners of women are the surest criterion by which to determine whether a Republican Government is practicable in a nation or not. The Jews, the Greeks, the Romans, the Swiss, the Dutch, all lost their public spirit, their Republican principles and habits and their Republican forms of government when they lost the modesty and domestic virtues of their women.”

In a book called “Sex and Culture” written in 1914, Dr. Unwin wrote, “The sexual behavior of women before marriage is the decisive factor in cultural success. Men are mainly motivated by sex. If they can get it without marriage, they contribute less to society.”

“Pre-nuptial chastity coupled with absolute monogamy energizes cultures most. Cultures that sustained this for three generations exceeded all other cultures in every area. Only the world’s greatest empires managed it:

– The Athenians
– The Romans
– The British

“Embracing total sexual freedom produces an ‘inert’ culture. People focus only on their own wants and needs. Such cultures are conquered by others with  greater social energy.”

There are MANY reasons why God commands the aged women to teach the young women to be chaste and keepers at home. It not only protects them, but it sustains culture. When women commit fornication and leave their homes for the workforce, there is no reason why men need to be sexually pure and work hard to be providers. Their entire incentive is gone.

Sex is a driving force in men for good or evil. When they desire sex and have found a good woman who will not give them sex until marriage, they will marry and work hard to provide for their families. This is why the first seven chapters of Proverbs warns young men of the “strange woman,” the promiscuous woman, who lurks around waiting to destroy them. Men’s sex drive was given to them to marry, produce children, work hard, and defend their families and nations, not to look at porn, fornicate, and be lazy. When women leave their station in life, men follow.

Teach your daughters to be sexually pure and desire to be keepers at home caring for their husbands, children, and home. Teach your sons to be sexually pure and not fall for the seductress but work hard and prepare to provide for a family. Be diligent in teaching and training your children these things, women. If you don’t, culture will teach them how to destroy themselves and culture.

Let not thine heart decline to her ways, go no astray in her paths. For she hath cast down many wounded: yea, many strong men have been slain by her. her house is the way to hell, going down to the chambers of death.
Proverbs 7:25-27

Righteousness exalteth a nation; but sin is a reproach to any people.
Proverbs 14:34