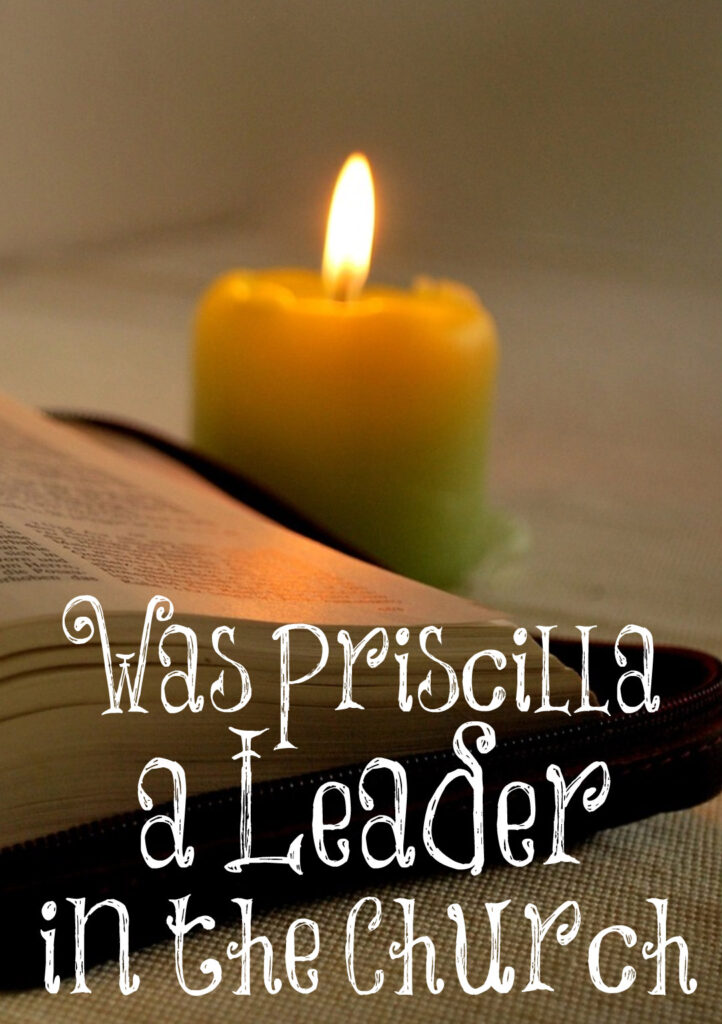 Priscilla has been used by feminists for many years to argue that women can be leaders and preachers in the churches. Here is what the Bible has to say about her.

“Greet Priscilla and Aquila my helpers in Christ Jesus” (Romans 16:3).

“The churches of Asia salute you. Aquila and Priscilla salute you much in the Lord, with the church that is in their house” (1 Corinthians 16:19).

“And found a certain Jew named Aquila, born in Pontus, lately come from Italy, with his wife Priscilla; because that Claudius had commanded all Jews to depart from Rome: and came unto them” (Acts 18:2).

“And he began to speak boldly in the synagogue: whom when Aquila and Priscilla had heard, they took him unto them, and expounded unto him the way of God more perfectly” (Acts 18:26).

“And Paul after this tarried there yet a good while, and then took his leave of the brethren, and sailed thence into Syria, and with him Priscilla and Aquila; having shorn his head in Cenchrea: for he had a vow” (Acts 18:18).

Recently, I found a book that was written in 1955 called “All of the Women of the Bible.” I thought it would be a great study since feminism had not infiltrated the churches back then. I was wrong. Here’s what the author, Edith Deen, had to say about Priscilla:

“Priscilla became the teacher of the eloquent and learned Apollos.” No, she wasn’t “the teacher.” She, along with her husband, Aquila, took him aside one time and taught him the Scriptures more clearly. It’s amazing how feminists will add one phrase to twist what actually happened.

“Though she and her husband ‘labored together,’ in three of the five places her name appears first, evidence enough that she played the more important part in the early Christian church.” How does her name appearing first three times out of five become evidence that she played a more important part in the early church? This has nothing to do with anything! The Apostle Paul was clear that women are to be silent in the churches and that only men can be the leaders and elders in the churches. You think a woman who helped Paul would actually disobey him and God? NO!

“One of her first services was not only to teach but to ‘expound’ to the eloquent Apollos.” First of all, she wasn’t in a “service” when she taught Apollos with her husband. Scripture says nothing about this happening during a church service. And what does the author mean by highlighting the word “expound.” It’s as if she means that Priscilla preached!

“It was suggested that Priscilla was the author of Hebrews, but this suggestion is not supported by proof.” Why would she even bring this up if her purpose wasn’t to plant this seed in the minds of her reader? I have never heard this before. Most theologians believe it was Paul who wrote the book of Hebrews, since it sounds like him. (Authors have a voice in their writings.)

“Historical facts, not recorded in the Bible, attest to Priscilla’s fame. Tertullias records, ‘By the holy Prisca, the gospel is preached.” Yet another thought which isn’t in the Bible that this author wants to plant in her readers’ mind: Priscilla preached. No, she didn’t. Not one woman in the Bible is said to have preached.

Beware of false teachers, women. We can’t even trust a book written about women in the Bible from 1955. Read Scripture and trust what God has to say. We don’t need to try to read things into His Word that negate His clear commands to us. He’s clear that women are to lean in silence with all subjection in the churches. Men are the ones commanded to be pastors, preachers, and elders in the churches, not women.

I threw this book away where it belonged, in the trash.