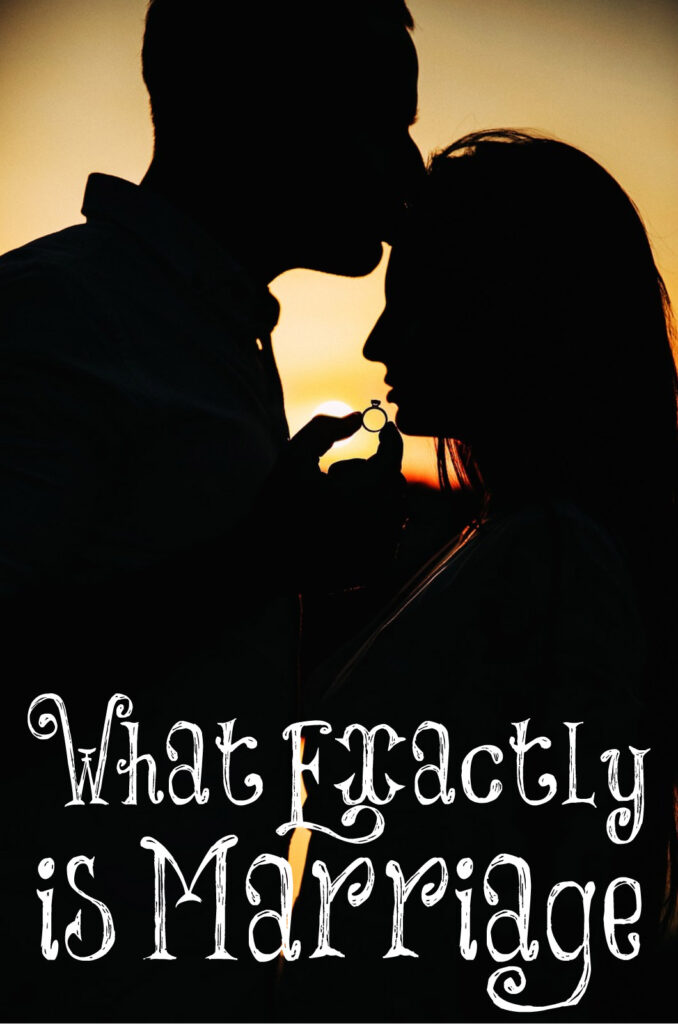 The definition of marriage has been incredibly watered down in our culture. Many believe they don’t need a piece of paper. They can live together, and this is okay. Many young “Christians” believe this to be true. Some believe if you’re having sex and even having children, you’re married. So what exactly is marriage?

“But from the beginning of the creation God made them male and female. For this cause shall a man leave his father and mother, and cleave to his wife; And they twain shall be one flesh: so then they are no more twain, but one flesh. What therefore God hath joined together, let not man put asunder.” (Mark 10:6-9)

The “one flesh” description of marriage, however, does show the sacredness of sex within marriage, and that the intention for sex is only in marriage. Becoming “one flesh” with a harlot shows the great destruction of sex outside of marriage. This is why we are commanded to FLEE fornication, and that fornication is a sin against one’s own body (1 Corinthians 6:18). We are commanded to keep the marriage undefiled (Hebrews 13:4) for many good reasons.

Is living together marriage? No. Many couples live together, but they aren’t married. They are fornicating. There wouldn’t be a unique word for sex outside of marriage (fornication) if there was no such thing. Sharing a home together isn’t marriage. It’s pretending to be married without the one vital ingredient.

What is this vital ingredient? Commitment; a vow; a promise, a covenant until death do you part. A man is commanded to leave and cleave to his wife. What does “cleave” mean? It means “to stick; to adhere; to hold.” Marriage is far more than just sex and living together. It’s a vow made to each other in sickness and in health, in good times and bad times, in riches and poverty, until death do you part. THIS is what will keep you together and defines a biblical marriage. It’s a sacred relationship between a man and his wife for life. It’s an example, a mystery, of Christ and His Church which is founded upon commitment and a covenant.

Lastly, remind yourself what the definition of love is in God’s Word. It’s patient and kind. It believes all things, hopes all things, endures all things, and it never fails (1 Corinthians 13). Marriages that last are defined by love and commitment. Let this be your marriage.

Love is patient, love is kind, it is not jealous; love does not brag, it is not arrogant.  It does not act disgracefully, it does not seek its own benefit; it is not provoked, does not keep an account of a wrong suffered, it does not rejoice in unrighteousness, but rejoices with the truth; it keeps every confidence, it believes all things, hopes all things, endures all things. Love never fails.
1 Corinthians 13:4-8

3 thoughts on “What Exactly is Marriage?”