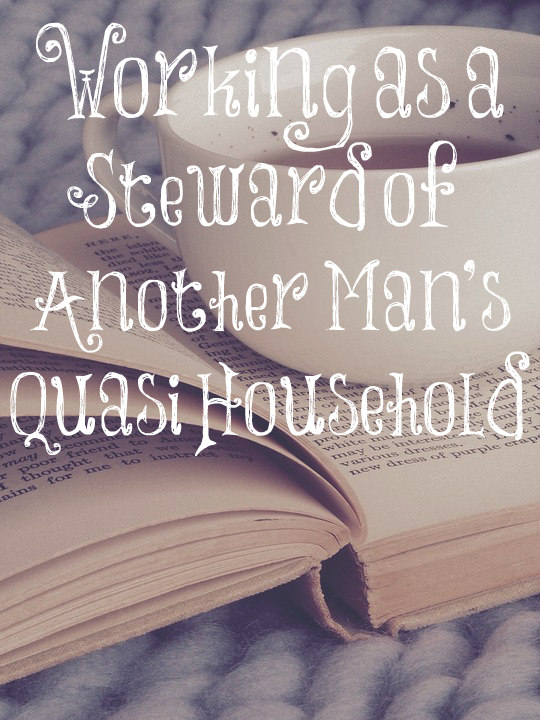 Here is an excellent post written by a man named Dominic Tennant. His blog is called “In the Habit of Goring: Where a Recovering Ex-Atheist Skewers Things With A Sharp Two-Edged Sword.” He has a VERY interesting take on women as buisnesswomen or women rulers.

Aside from Deborah, this is the recurring response to the argument against female rulers.

This is because the household is the primitive unit of society. It is the originator of order in the world. Adam’s household was also the original kingdom. As God’s son, Adam was a vassal king, representing God’s rule in creation. His house’s mission was to expand and carry on God’s work of establishing right order in the world (compare how Jesus, in the gospel which especially emphasizes his sonship, repeatedly speaks of doing only what the Father has given him to do).

So a household is a kingdom in microcosm. As it expands and becomes many households, the kingdom in turn expands into its fullness. But it does not fundamentally change form; it only grows into maturity. This is why Israel as a national kingdom is still called the “house of Israel” (e.g. Exodus 40:38).

In Hebrew, house and household are the same word: בַּ֫יִת, beyt. I use the English words interchangeably to emphasize the broader conceptual nexus that follows from the language of Scripture.

God carries his rule into the world through the fathers of households. Every father rules his own house, and as these houses multiply, the wiser fathers work together to rule their clans and tribes, all the way up to the national level. The purpose of this is always right order: establishing and maintaining the relationships between people and God, and between people and people. A father is a priest and a king. This is the system we see Moses establish in Exodus 18; indeed, the virtuous woman of Proverbs 31 is married to a town patriarch who sits in the gate to judge disputes among the people, and to ensure the right order, the shalom of the houses under his care.

This brings us back to women in households and businesses. The virtuous woman of Proverbs 31 is a businesswoman. She assesses and buys a field; she plants a vineyard and sells the produce; she produces linen and trades it to merchants. But she does all this not as her own boss, nor as an employee, but as a wife. This is because the household was, until very recently, the basic unit of both order and production in society. (Incidentally, even relatively untaught Christians seem to internalize this quite often; the number of Christian entrepreneurs is surprisingly high.)

A wife would have charge of servants and unmarried sons, with varying degrees of authority over them. But her authority was not one of judgment over moral matters; not one of ruling over these vertical and horizontal relationships; but rather over affairs of utility. Production is a separate issue to justice. Both are about ordering the world, but they are separate categories.

But here’s a wrinkle: the way God set up the world, women could have authority over men in matters of production, but that authority was still set in the context of the household. A woman was a steward of her husband, helping him to establish order in whatever way he needed. If he died, she could continue to do much of that work alone if she did not require the security of a new husband—that would be rare in the ancient world, but certainly the woman of Proverbs 31 seems capable of self-sufficiency.

This is a wrinkle, because a woman working in some other unit of production than her own household is an extraordinary and novel idea. The household is where production primarily happened, and also not-so-coincidentally where a woman’s responsibility first lies. So the situation we find ourselves in today is bizarre, even pathological, compared to God’s design.

A woman who works in a business that is not an extension of her household is in a weird situation. She might not have a choice, but she is effectively working either as the head of a quasi-household, if she is the business owner; or—vastly more commonly—as the steward of another man’s quasi-household, since nearly all significant businesses have men at the very top. Neither of these is necessarily wrong, but they are a far cry from the original design. It’s no surprise that women have been getting progressively unhappier as they have been progressively “empowered” in the workplace; focusing on competition and advancement rather than nurture and flourishing forces them to treat their feminine strengths and virtues as weaknesses and liabilities.

For a woman to have authority in business is fine, because production is both a masculine and feminine mandate. A female executive is not representing God’s father-rule. But the business world itself is demented in that it has torn a rift between households and production, and this creates some very thorny difficulties for women to negotiate—difficulties they often negotiate poorly, and end up regretting when they are older. It masculinizes many women—short hair, power suits, bossy attitudes—and makes them both unattractive and miserable. If it is at all possible, it is far better for a woman to focus on stewarding the production of her own household than of an emaciated household-knockoff.