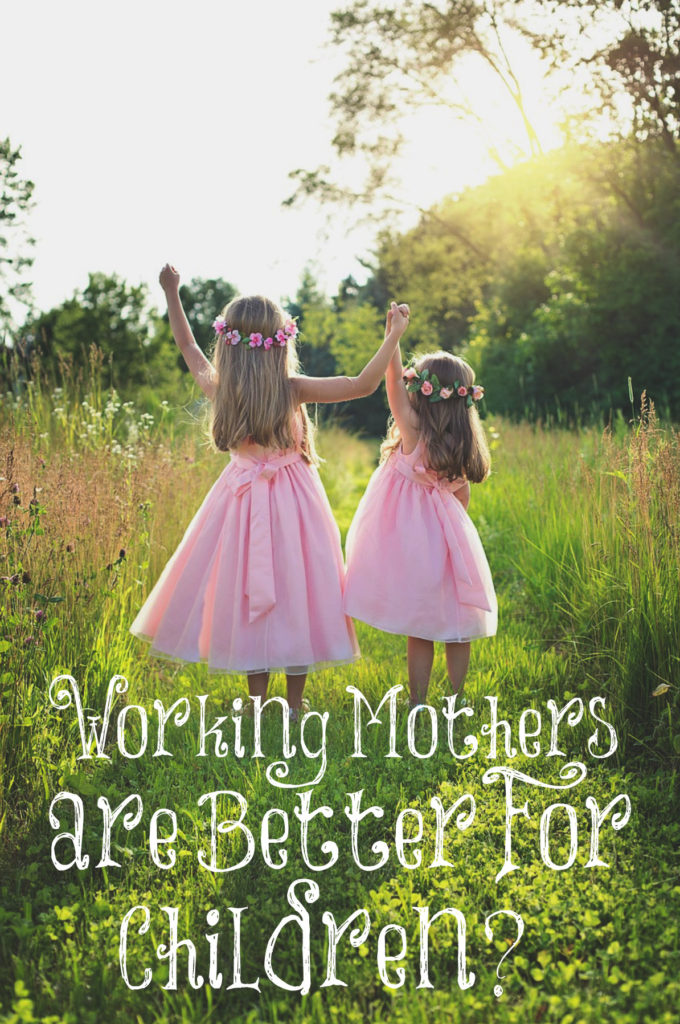 Jill Filipovic wrote a diatrabe basically arguing that working mothers are better for children on Twitter the other day. Her words are in quotes. Mine follow.

“And now I am really going to get myself yelled at, but I also think the issue of example setting for a kid is a totally fair one. What example are you setting when dad works for pay and mom does the care work at home? Lots of reasons not to want to set that example for a child. Among them: Girls with working moms do better in school.” So men and women obeying God in their God-ordained roles shouldn’t be set for a child? And girls of working moms do better in school? This is the goal in life? It’s not for believers in Jesus Christ.

“Men with stay-at-home wives are less likely to promote and support women in their workplace.” I have seen nor heard any evidence of this. Men, at this stage of the game, expect and accept women in the workforce. For most of them, it’s all they’ve known!

“Sons with working mothers do more household chores and childcare when they grow up. These aren’t just individual choices; they’re social.” And how does she know this? Mothers at home have time to teach their sons to help more around the home and with younger siblings around. Mothers at home are also the ones doing the household chores and caring for the children. Working mothers often need help from others in accomplishing these important tasks.

“The reality — in our capitalist society — is that if you are home full time, your husband is your boss and there is no HR department. Should care work be valued much more?” So, it’s wrong to have your husband as your boss (the man whom you have committed yourself for life) rather than a stranger as your boss?

“Yes! In the reality we live in, are women who stay home taking on significant risks? Also, yes. I would also argue that I am not convinced that this division of labor — one full-time wage earner, one full-time-at-home career — is a good or healthy one, even when you take out of it the (very salient) fact that it’s women who are overwhelmingly the at-home careers…There are real and tangible benefits to children having a working mother — something we’re not often hesitant to say.” Men being the providers and women being the homemakers were designed by God, and they’re good since He’s good! It’s much healthier and safer for women to be home full time with their children. This is what they were created to do!

I can’t think of one “real and tangible benefit” children have with a working mother. (Yes, I know some women must work and have no choice, but I think even they would admit that it would be better for their children if they were home full time with them.) Strangers or someone other than their own mother is better raising them? HOW can this be better or of benefit to the child??? In fact, children who are raised by their mothers are more stable and emotionally secure. Please read Mary Pride’s The Way Home and the research she did on this topic.

“To be honest, I would have a really hard time being married to someone who decided they wanted to direct their ambition into the sole work of raising our child. That’s not because I don’t think work is important. It is because it’s very inward-looking and wrapping one’s identity in one’s progeny. If you have a passion for child development, great, there are many paths to walk down that do a lot of good for lots of people.”

Jill would have a hard time if her husband wanted her to raise their own child. She wants strangers to raise him/her instead, so maybe she could go work in a daycare or be a teacher in a public school and try to help raise other children. Or she suggests you women who want to be home full time should think about doing this, since this may be a better “path to walk down” in her opinion rather than raising your own children.

39 thoughts on “Working Mothers are Better For Children?”